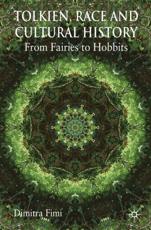 Tolkien, Race and Cultural History: From Fairies to Hobbits
$40.18
TolkienGuide is a Blackwell's affiliate

914
Urulókë replied
16 hours ago
The most brilliant bookshops in the world: our readers’ picks

Dec 16, 2012
2012/12/16 13:11:11 (GMT) Greenwich Mean Time, London, Dublin, Lisbon, Casablanca, Monrovia
Members of which family. I wonder? His own, perhaps? But seriously; if he'd got provenance from members of the Tolkien family, wouldn't it make sense to say so up front? Or are we just going to get 'after-the-fact' details like this, every time someone here raises legitimate questions?

The longer this goes on, the iffier it gets, IMO.
Share

Beren wrote:
Well I believe he has been in contact with family members and has provenance for the items. Also know several auction houses have already shown interest ... anyways, just a little positive critique.

Dec 16, 2012
2012/12/16 14:33:48 (GMT) Greenwich Mean Time, London, Dublin, Lisbon, Casablanca, Monrovia
I haven't gone to the listing --but if I had made an offer (like "Bruce"), I'd be pretty unimpressed with the details being publically posted in the Q&A section of eBay. That aside, I'm sure auction houses are interested in the stuff --it's a good time, I'd think, to be selling Tolkien stuff. Agree with garm though --why conceal provenance? You don't need to give details, just state that more details can be provided if a buyer is seriously interested.

Dec 16, 2012
2012/12/16 18:52:41 (GMT) Greenwich Mean Time, London, Dublin, Lisbon, Casablanca, Monrovia
I'm sad that since the fake signatures somehow everything is being questioned. This person was 100% certain commissioned to demolish Tolkien's house and 100% certainly is selling the fireplace that was ordered by Tolkien according to his own wishes. The seller has been in & out of Miramar hotel and there has been speaking with members of the Tolkien family. The offer was indeed made and so far not accepted (because I do have another buyer interested in the lot, but in talks). Why always is it needed to be so negative when it comes to large amounts?
Why doubt the provenance, while all items have been in and out the news before several times. Anyways, I'm going to stop posting on this thread for the time being.
Share

Dec 16, 2012
2012/12/16 20:54:41 (GMT) Greenwich Mean Time, London, Dublin, Lisbon, Casablanca, Monrovia
Beren, I might be wrong here --but my guess is that most book collectors (& there is much to criticise in collecting books) find it a step too far (if that's the right expression) to start coveting items that Tolkien once owned, particularly those which have very little to do with what we all admire him for; namely his writing. Personally, I can see the appeal of a item with clear association e.g. a desk --but not a fireplace.

That accounts for some of the hostility &/or criticism --the rest, I guess, is just anger at the "market" aspect of collecting (even though individual collectors can also benefit from this market) i.e. the shameless promotion of items, to the point of skewing the facts (& sometimes inventing them) for personal financial gain. Probably not the case here (as you point out), but you don't need to look far to see examples of this. It also accounts for some of the hostility towards Jackson films.

Dec 16, 2012
2012/12/16 21:04:51 (GMT) Greenwich Mean Time, London, Dublin, Lisbon, Casablanca, Monrovia
Forgot to add, in respect to this particular item --why is the Lin Carter story still being peddled (on this very forum by Enotsnekra), when from the very start this was thought to be false? i.e. it's not Carter's handwriting. That was four years ago now, yet the story seems to have stuck.

Let's make it clear that the contractor was not commissioned to demolish Tolkien's house. The Tolkiens had not lived there for the best part of half a century. We are still not being offered any evidence that these items were on the premises when the Tolkiens lived there.

I know what Tolkien's address was in Poole - he used the house number and street name. I've looked in all the usual references and there's nothing to say that 'Tolkien called his house Woodridings'.

I don't like it when folk try and tell me they've got information that the rest of us don't have, and won't say where they've got it. Especially when the reason for doing so is to make money.
Share

Dec 16, 2012
2012/12/16 21:45:23 (GMT) Greenwich Mean Time, London, Dublin, Lisbon, Casablanca, Monrovia
I am sure most of us starting out collecting books but I bet we all have some other collectible item- whether it be a letter, artwork or maybe even Tolkiens typewriter

Personally I have no problem with that and if you have a desire to own Tolkiens old fireplace then so be it. I havent got a problem with the seller 'having a go' at selling at what most would deem a ridiculous price and in the current market good luck to him if someone is daft enough to pay that sort of amount.

What I do question is the way which it is done. Looking at it from the sidewalk he is selling something worth (alledgedly) £50k plus. He then posts details of an offer in open view even quoting a name albeit a forename only! I agree with Khamul why would he do this? It isnt good business practice in anyones book.

Add to this he then posts on this site an item he is in fact selling! This isnt just a Lucky find it is in fact advertising for him isnt it?

Then once done he doesnt answer the responses ? In this I am not doubting the items came from where they are alledged to do so - but wouldnt you want to respond and answer your critics? Maybe we need to give him time but i have a feeling no reply will be received.
Share