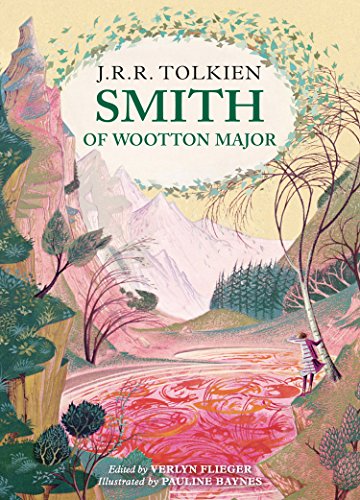 Smith of Wootton Major
£4.99
TolkienGuide is an Amazon.co.uk affiliate

766398
Trotter replied
Yesterday
In search of the world’s most valuable books, letters and laws

Dec 29, 2016
2016/12/29 21:14:35 (GMT) Greenwich Mean Time, London, Dublin, Lisbon, Casablanca, Monrovia
As many of you will know, we're preparing a new edition of our J.R.R. Tolkien Companion and Guide for publication in September. One of the articles in the Reader's Guide component is "Collecting and sales", about the collecting of Tolkien's works and "Tolkieniana", with general comments about sales and prices. We want to bring this up to date for 2016/17 - ten years or so after our first edition - and wonder if anyone here would care to suggest current trends in collecting, notable events or sales, etc., indeed any thoughts at all.

Examples of aspects and questions, by no means exhaustive:

The continuing (comparatively) high prices for Tolkien books that are very common in the market, even for later printings, copies with damage, etc.

The increase in special "collector's editions", e.g. by HarperCollins, and the fact that these aren't necessarily limited editions.

The increase in variant trade editions, as when HarperCollins publishes a paperback in both mass market and trade paperback size.

The muddying of the Tolkien autograph market by forgeries.

Has the number of Tolkien collectors grown worldwide?

Did the films encourage more people to collect, and have they stayed with it once the publicity faded?

Are collectors specializing more, rather than being "completists"?

How has the proliferation of booksellers (amateur as well as professional) online, largely taking over from physical shops and printed catalogues, changed the face of Tolkien collecting?

Jan 1, 2017
2017/1/1 20:17:44 (GMT) Greenwich Mean Time, London, Dublin, Lisbon, Casablanca, Monrovia
One thing that I have noted is that more secondary works are apparently now also considered collectable – this includes even academic literature (have you seen the current prices for the proceedings of the Centenary Conference or early volumes of Tolkien Studies??) and specialist titles such as the out-of-print issues of Parma Eldalamberon.

And insofar as I qualify as a 'collector', I am certainly not a completist. I have no ambition of getting all that comes out, nor have I any ambition of covering more than a single edition of the books that do come out (except for new and substantially updated editions – I do have the second edition of your J.R.R. Tolkien Companion and Guide on pre-order

Jan 2, 2017
2017/1/2 17:02:21 (GMT) Greenwich Mean Time, London, Dublin, Lisbon, Casablanca, Monrovia
My 2 cents on this. I am just past two years of discovering this site. I have collected for close to 20 years, mostly toys and ephemera of various pop culture franchises including Tolkien. During the height of popularity of the LOTR trilogy I was knee deep in statue collecting but not books. My gateway to books was discovering images of the bookshelves people were posting of the HC deluxe editions. I really thought they looked sharp and decided to buy some, at first focusing on finding the better deals for new books still in print, then replacing my Hobbit and LOTR with first printings, then picking some of the earlier HC deluxe editions (the black ones of varying heights - poor design). My big splurge was the 97 Centenary set to which I'd like to match a Hobbit and Silmarillion. And besides attractive reprints I will call it a day then. I collect mostly based on appearance and feel, the aesthetics of the craft - so to speak


As an experienced collector but new book collector it was exhilarating reading and trying to figure out what is what. That takes some time, but is the fun part of the process. The winds have been sucked from my sails by two things. First, the books I really am after simply are not available. When they do become available the price is often outlandish or the condition is problematic. Second, my biggest frustration is that book sellers seem rather loose with condition issues, if they provide any information at all. My two big purchases were both somewhat disappointing when the book arrived. One I kept, the other returned with no issue.

A funny anecdote. I was sent a list of books for sale by someone who was cashing out. Collected during the height of popularity of the LOTR film series and sent me his spreadsheet with older pricing. It was shocking. He told me to completely ignore the prices because, in his words, the market completely collapsed.
Share

Jan 3, 2017
2017/1/3 2:46:06 (GMT) Greenwich Mean Time, London, Dublin, Lisbon, Casablanca, Monrovia
These are all good points. There are indeed more inexperienced sellers out there, Khamûl; anyone can pay to be on abebooks, or wherever, and be listed just the same as the pros. But their poor descriptions, lack of detail about condition or jacket, etc. often (not always) give them away. As for prices, by rights those should have moderated again by now, but many sellers still think the market is hot and they'll make a killing. Some specialist secondary works are at least genuinely scarce, but even so, the goal of anyone in the book business is to sell, and generally that means pricing according to one's market in order to have a good cash flow.

Wayne has sometimes told the story of reading a catalogue years ago with great Tolkien material, from which he bought a couple of the more moderately-priced items, and the dealer rang him up to ask about his interests. Wayne pointed out that no serious Tolkien collector he knew, and he knew most of them, could afford the higher prices, but the dealer said he was trying to push the market, that he had bought high at auction to push up after-auction prices, and was willing to hold firm until he got what he was asking -- and would put his kids through college on the proceeds. Before long, the leftovers from the catalogue were themselves put up at auction, and the dealer lost on the exchange.

Jan 3, 2017
2017/1/3 9:15:19 (GMT) Greenwich Mean Time, London, Dublin, Lisbon, Casablanca, Monrovia
This is a phenomenon that seems to be happening all over the world. I collect books in Spanish (Argentina, Uruguay) and Portuguese (Brazil, Portugal). In Argentina and Brazil, antique bookstores seem to be out of touch with prices and increased simply because of the movies.

It's strange that during the heyday of hobbit movies, prices remained reasonable. And last year and this year the books seem to be being bought and I hardly find old books.

here are some of my initial thoughts on the market:


I don't think that it is possible to be a completist any more, especially given all the variants as you mention in your original request. Perhaps you (W&C) are able to keep up, but I assume there is a line drawn somewhere? All variants of all foreign editions? Even just keeping up with HarperCollins every time they change a movie-related cover art or up the price a tiny bit due to inflation, etc. is an immense challenge (that I don't take up, myself). It seems, mostly through my exposure here to all you fine collectors, that everyone has a very specific area of focus.


For your last question (how has the face of Tolkien collecting changed), I think it has significantly, but I am running out of time to keep up. I will hopefully have more time later today to continue, as I think this is quite interesting to discuss and see what everyone else thinks too.
Share

I see a very slow market where sellers haven't yet accepted that prices have essentially collapsed and there are simply very few active buyers. No one is in any hurry to sell (so asking prices often have not adjusted) and no one is in any hurry to buy, so items are not selling unless the seller has adjusted the price accordingly. I can't see much changing, other than sellers will gradually reduce asking prices and more books will start to come back onto the market. Without new movies, there probably won't be a resurgence in collecting interest to the level we saw in the early-mid 2000s.

Overall, I see this as a positive. We will eventually return to a sane and balanced market and it will cease to be driven by hype and the desire to make a fast buck.
Share

In general it seems like there is both less available in used bookshops and eBay and what is available is more expensive than it was maybe 5 years ago. It seems like alot of material was brought to market at the peak of the hype from the movies but now lots of books are in people's collections and not being sold as much they used to be.
Share