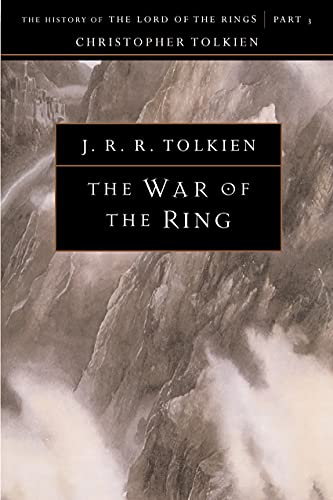 The War Of The Ring: The History of the Lord of the Rings, Part Three (History of Middle-earth Book 8)
$9.99
TolkienGuide is an Amazon.com affiliate

Leonard Rosenman
The Lord of the Rings Film Score (1977)

Stephen Oliver
The Lord of the Rings Radio Drama Score (1981)

Johan de Meij
The Lord of the Rings Symphony (1988)

Sep 9, 2018
2018/9/9 5:59:00 (GMT) Greenwich Mean Time, London, Dublin, Lisbon, Casablanca, Monrovia
Poems and Songs of Middle Earth (1967 LP and cassette)
The original 8-song cycle
sung by William Elvin, with Donald Swann on piano
Can be found on the J.R.R. Tolkien Collection cassette boxed set
Can be purchased as a MP3 under the title “A Rare Recording of J.R.R. Tolkien” (don’t bother to purchase the CD; it’s a CD-R burned on demand)


The Road Goes Ever On (MP3)
The original 8-song cycle
sung by Stewart Hendrickson, with Theo Wee on piano
live performance from 1972, published online in 2012 at http://stewarthendrickson.com/RoadGoesEverOn.html
CD cover art exists, but I don’t know if a CD was ever published; anyway, it would probably just be a self-published CD-R. Not particularly notable performance, probably one of hundreds of such recitals given since the 60s. The singer has a bit of a pronounced American accent. But it’s pleasant enough.


The Road Goes Ever On (1997 CD)
sung by Jan Jacob Krediet, with Alexandra de Jongh Swemer on piano, and choir
live performance from 1995, CD published in 1997 (500 copies?)
http://www.janjacobkrediet.nl/tolkien_music.html
Rather huxterishly claims to be the world premiere of the piece. But it is the only complete recording of the 1978 revised 9-song cycle, which calls for a choir and includes Bilbo’s Last Song.


The Road (1999)
The Road Goes Ever On (the song, not the whole cycle)
sung by Abby Strauss

Sep 9, 2018
2018/9/9 6:07:34 (GMT) Greenwich Mean Time, London, Dublin, Lisbon, Casablanca, Monrovia
The radio drama soundtrack by Stephen Oliver is a re-recording, not what was actually used in the drama (the original tapes are supposedly lost; and the re-recording is supposedly expanded). It was published on LP and cassette in 1981. If you want it on CD you have to get the full drama in a 1995 UK edition with **14** discs; the soundtrack is the 14th disc.
Share 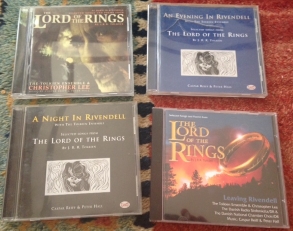 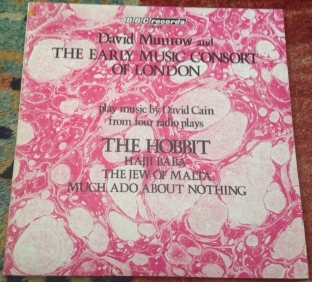 It is rather impressive in the level of detail collected there.
Share

Urulöké, thanks; that’s insanely exhaustive, though. I was more curious what people liked in this genre.

I’ve made a stab at reordering the Shore LotR OSTs according to the chronology of the novels. I’ll post it if anyone’s interested. It’s still not very Tolkienish to my ear, though.
Share

1 The Music of Glenn Buhr Winter Poems 2000
ASIN: B00000IOBH Has A Beren & Luthien suite. The Winter Poems have some M-e flavor too.

9 Jim Čert Písnê Stredozemê (The Songs of Middle-earth) 1998. In Czech, Cert & his accordion. Some Tolkien lyrics. I think of it as a Breeman who’s heard many songs and tales at the Pony and he’s got an accordion.

10 Thusian, Silmarillion 1994. Instrumental, enjoyable for me. I think classified as space music.

11 Sally Oldfield, Water Bearer 1978. Classic for the “Songs of the Quendi” but most of the tracks reminded me of M-e, lyrics and/or music seemed applicable, even “Child of Allah”.

16 ABSOLUTE BEST Galadriel's Song of Eldamar, Ai! Laurië Lantar from the The Tolkien Ensemble, An Evening in Rivendell, 1997. Elvish pop.

17 Only for the Brave: John Sangster, A Musical Interpretation of The Lord of the Rings 2002. Some of this is ruthless jazz, ruthless. Contains classics like Sam the Man, Glad'riel, & Ents and Entwives plus Three Cheers for Smeagol.
Share