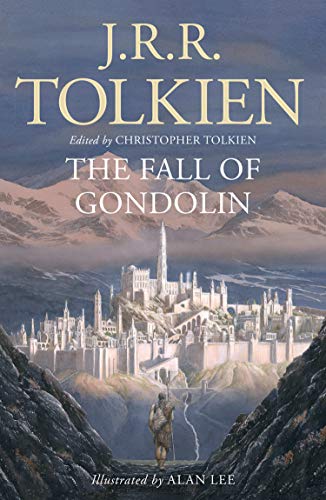 The Fall of Gondolin
$14.14
TolkienGuide is an Amazon.com affiliate

The History of the Hobbit

- black and grey book and slipcase (to match The Complete History of Middle-earth deluxe edition from 2017)
- JRRT monogram featured (or, possibly the design of Smaug that's featured on the dustjacket for the hardback) on the book and slipcase
- gold / yellow ribbon-marker
- essentially the same layout as the 2011 hardback edition (incl the frontispiece, and glossy plate section)
(I was thinking of the 2011 History of the Hobbit hardback somewhat matches The History of Middle-earth, in 3 parts w/ the brown, green and blue dustjackets)

The Complete Guide to Middle-earth (illustrated by Ted Nasmith)

The Lord of the Rings Reader's Companion

- same frontispiece as the current edition will be reflected in the deluxe
- Tolkien's alternate design for The Fellowship of the Ring as the motif on the book and slipcase.
- blue or red ribbon marker
- blue or red slipcase

Just some speculation. Also, I don't see Letters getting a deluxe release, but rather a print-on-demand (King Heidrek, the 13 History of Middle-earth hardbacks, English and Medieval Studies and The Song of Middle-earth). Same with some other titles (such as The Road to Middle-earth).

Oct 6, 2019
2019/10/6 16:44:22 (GMT) Greenwich Mean Time, London, Dublin, Lisbon, Casablanca, Monrovia
Each to their own but I don't really get the 'deluxe' treatment for reference works. My HoME, HotH, LotR companion, guides, A-Zs, all those sorts of works are covered in notes, pages with essay extracts, notes to letters and websites.

I would prefer stories over reference work when it comes to deluxe editions.
Share

Oct 6, 2019
2019/10/6 18:30:50 (GMT) Greenwich Mean Time, London, Dublin, Lisbon, Casablanca, Monrovia
I get that, but the way I see it, is if The History of Middle-earth got the deluxe treatment, why not History of The Hobbit? Out of the titles I've named that is the most likely possible candidate.
Share

insurrbution wrote:
I get that, but the way I see it, is if The History of Middle-earth got the deluxe treatment, why not History of The Hobbit? Out of the titles I've named that is the most likely possible candidate.

That is fair logic of course, and I only speak for myself, most people don't write in their books. Mine are covered in notes so I wouldn't see the benefit in a deluxe treatment for what I regard as reference.
Share

Oct 6, 2019
2019/10/6 22:48:09 (GMT) Greenwich Mean Time, London, Dublin, Lisbon, Casablanca, Monrovia
I just don't see the point of bland editions of reference works, really. And the deluxe editions of reference works can't really be anything other than bland. I get that some people have an insane need to collect everything in exactly the same format, but I don't think there are THAT many people. HoME took a long time for its second deluxe version because they didn't think there was enough of a market for it (they said this), and when it did, it got a half-assed version, which initially was expected to be less than 250 copies (hence the half-assedness).
Share

Oct 7, 2019
2019/10/7 4:00:07 (GMT) Greenwich Mean Time, London, Dublin, Lisbon, Casablanca, Monrovia
An updated publications of Letters is about the only thing I think is missing in current Deluxe format.
Had they actually done a proper job on the HoME set; then I could see the argument for HotH.

Maybe some amalgam of the smaller works (Sir Gawain and the Green Knight, Finn & Hengest, etc.) that would otherwise be too small as a stand alone work. Don't need another FoA or SoK tiny Deluxe edition.
Share

Oct 7, 2019
2019/10/7 10:41:08 (GMT) Greenwich Mean Time, London, Dublin, Lisbon, Casablanca, Monrovia
Agreed. After seeing what they did with HoME I don’t see the point of other reference works getting the deluxe treatment - should they match the HoME deluxe editions (horrors... it is mismatched with the rest of the deluxes) or should they match the rest of the deluxe so that HoME still remains the odd one out?

A nice pickle! And HoME wasn’t half-assed. Although this isn’t even a word, IMO it was full-assed

I’d like to see Mr. Bliss (because the illustrations are really nice!), Tolkien’s Letters, and possibly to make the end of this series a compilation of his other works that would be too short to warrant being released as standalone books.
Share

Oct 7, 2019
2019/10/7 16:30:49 (GMT) Greenwich Mean Time, London, Dublin, Lisbon, Casablanca, Monrovia
Yeah if not for its such short length, The Lay of Aotrou and Itroun would most likely have gotten that treatment. I don't much about book binding, but I'd think it'd be too small to even MAKE into a deluxe edition.
Share