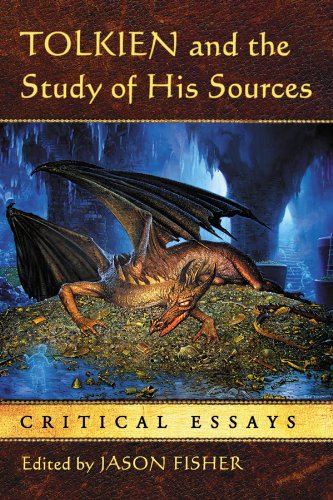 Tolkien and the Study of His Sources: Critical Essays
$10.49
TolkienGuide is an Amazon.com affiliate

91
AndyBirdUK posted
Yesterday
The Lord of the Rings: The Rings of Power (Season One: Amazon Original Series Soundtrack)

Books and other printed materials >> Super Deluxe Children of Hurin
1234

Dec 16, 2007
2007/12/16 8:26:18 (GMT) Greenwich Mean Time, London, Dublin, Lisbon, Casablanca, Monrovia
Nah, I'm not too worried about not having ordered two copies up front. I think the number is fairly academic anyway (although number 3 certainly does have a nice ring to it!)

I'm not sure about whether copies 1 and 2 were sold or given (as you suspect to CT and AL) . My address label apparently had No.3, (P?)1-1 and the shipping reference on it. I'm assuming the 1-1 simply refers to it being the first printing?

However, my worldpay cart ID was 151. It might be assumed that the first transaction was 150, which could well be someone buying copies 1 and 2. Just speculation, of course!

Dec 16, 2007
2007/12/16 9:05:27 (GMT) Greenwich Mean Time, London, Dublin, Lisbon, Casablanca, Monrovia
Nah, I'm not too worried about not having ordered two copies up front. I think the number is fairly academic anyway (although number 3 certainly does have a nice ring to it!)-Metapraxis

I was at work on the 19th, I can't just go surfing and checking my email like some!

Actually, I was also at work that day, but the 9 hour time-difference between Perth and the UK played to my advantage - There have to be some advantages to being stuck hanging off the bottom of the planet !!! :)
Share

Dec 17, 2007
2007/12/17 3:41:08 (GMT) Greenwich Mean Time, London, Dublin, Lisbon, Casablanca, Monrovia
Yep, north and south are pretty arbitrary, but given that those pesky Europeans drew the first world maps (and they also favour that annoying Mercatur projection which makes Western Europe look huge and Australia look the size of a dry-roasted peanut), I have grown to accept that I am dwelling on the underbelly of the planet :)

More importantly, my second [Australia-bound] copy of the CoH arrived today (number 97 -- which is kind of nice as my two copies neatly add up to 100). It's an impressive book and the colour is much nicer than it appeared in some of those eBay photos.

Now we all just have to hope that HC don't give up on trying to sell them direct and end up putting them on Amazon heavily discounted. That would be kind of annoying!

Good to hear that I'm not the only Aussie on the discussion board. Dr Quartz from Canberra used to post here, but I haven't heard form him in a while.
Drop me an email (below) if you want.

Dec 18, 2007
2007/12/18 1:29:28 (GMT) Greenwich Mean Time, London, Dublin, Lisbon, Casablanca, Monrovia
I just wanted to show my appreciation for people discussing when they ordered and what number they ended up getting. I live in the U.S. and had to ship my two book to my brother-in-law in Oxford, so I haven't seen which numbers I got. My order was placed 19/Nov/2007 11:55:08, so it sounds like I will get reasonable low numbers. I was afraid I would miss the boat and end up with something in the 200 or 300 range! (My brother-in-law is visiting for Christmas, so I will actually get mine in two days. I can't wait!!)
Share

Regarding my opinion of the book.... It truly is a fine binding. The leather is very nice. Although I understand Deagol's sentiment that a very nice slip-cased edition has a great feel (although I have yet to experience the sensation produced by an '82 Super Silmarillion), the clamshell will ultimately protect better.
Share

It is lunacy!
Who's got more than 10 copies of the same book!?