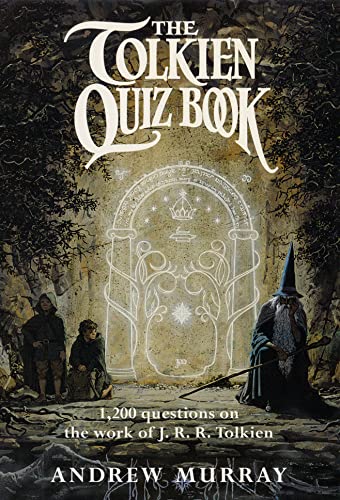 The Tolkien Quiz Book
£6.99
TolkienGuide is an Amazon.co.uk affiliate

914
Urulókë replied
16 hours ago
The most brilliant bookshops in the world: our readers’ picks

-
Winner of the 2019 Tolkien Society award for Best Website
Books and other printed materials >> REVIEW: The Silmarillion - Thirty Years On
By Khamûl

REVIEW: The Silmarillion - Thirty Years On

This was a good Christmas read; not too heavy, but good scholarship none the less. Focusing only on The Silmarillion.

Opens with Rhona Beare's article A Mythology for England; adapted from her book (J.R.R. Tolkien's The Silmarillion; 1999?). Much improved on the small book (if I'm remembering right; I thought it was very plodding & for children?). Touches nicely on the influence of climate on mythology (i.e. the gloomy north); and contributes a 'significant new piece of research' in exploration of the word earendel.

Michael Drout's article Reflections on Thirty Years of Reading The Silmarillion is a very personal account of Drout's own relationship with this book. Odd to see an article written like this by a leading Tolkien Scholar; very good. Covers some familiar ground with nostalgia & death under discussion; gives plaudits to those parts of The Silmarillion, in terms of style & content, that are often the very parts to come under the most criticism.

Anna Slack's Moving Mandos: The Dynamics of Subcreation in 'Of Beren and Luthien' is a rambling article (not in a bad way!) touching on subcreation in Of Beren & Luthien; focusing on the role of oath & song. The spoken word is also discussed in relation to The Gospels and Tolkien's Ainulindale (In the beggining was the Word...)

Allan Turner states in his introduction that the final three articles are concerned with 'the construction of the text'; touching on the editorial role of Christopher Tolkien and the 1977 text proper.

Michael Devaux's article The Origins of the Ainulindale - The Present State of Research (translated from french by the editor Allan Turner) brings together the threads of current research, many of which are French (and have possibly passed those of us in the UK by). Devaux seems to draw on quite a body of (french) research; discussing Tolkien's Catholicity in respect to his creation myth, whilst dissecting all the different elements through all the versions now available to us (through HoME). Although Tolkien's faith is often mentioned in scholarship, this article strikes me as different; perhaps because of the french perspective.

Jason Fisher's From Mythopoeia to Mythology: Tolkien, Lonnrot, and Jerome is the first article (that I've read) that directly & openly discusses Christopher Tolkien's role as author in the writing of The Silmarillion. As often as he is praised for his editorial role in the book's assembly, not many people discuss in detail his role as (essentially) author. Fisher states 'without Christopher, we might have had a 'Silmarillion', in the loosest sense of that term, but we would not have had The Silmarillion'. The Kalevala & The Latin Vulgate Bible are (as is implicit in the title) also disussed.

Nils Ivar Agoy's Viewpoints, Audiences and Lost Texts in The Silmarillion discusses in detail the idea of The Silmarillion coming down to us as a collection of 'lost texts'; both in a secondary way (within the Legendarium) and in a primary way (in the way the texts have physically come down to Christopher Tolkien, and ourselves). Agoy concludes that the 'lost text technique' simply does not work in The Silmarillion as published; whether Tolkien's aim or not; and that the book should be read as a novel by J. R. R. Tolkien.

All in a very good selection of articles; and very current (CoH is mentioned). The book itself is also of good quality; well bound; decent paper. Resonable priced at <£10.

[Thanks to Pieter at TolkienLibrary.com for original recommendation in site updates!]
Share