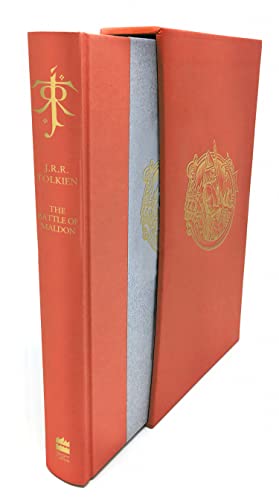 The Battle of Maldon: together with The Homecoming of Beorhtnoth
£75.00
TolkienGuide is an Amazon.co.uk affiliate

Tolkien and the butcher of Abingdon Road

2012/7/29 14:22:47 (GMT) Greenwich Mean Time, London, Dublin, Lisbon, Casablanca, Monrovia
While I was in Blackwell's, Oxford yesterday I had a chat with the nice man in the Rare Books dept; a Mr Brown. We were talking about the subject of books from Tolkien's library, of which I have a few, and the story of the Oxford butcher who'd bought a job lot of books and pamplets owned by Tolkien many years ago, and had a label made up: 'From the Library of JRR Tolkien'.

Now, I know about the labels - two items in my collection have them - but I knew nothing about the identity of the butcher. Mr. Brown knows - the man's name was Stanley Revell, who owned a butcher's shop on the Abingdon Road. I think he got it from his dad. Anyway; Revell was an enthusiastic amateur in the field of bibliography; but his passion was not Tolkien, but T.S. Eliot. Revell became a respected Eliot expert through years of collecting and research.

Mr Brown recalls that Revell bought this job lot from Thornton's, and used the mony from their sale to buy more of Eliot's works. It's worth googling Revell and Eliot; a remarkable tale.

*edit - sorry; i'd originally typed Ravell, but the man's name was Revell. I've corrected it now.