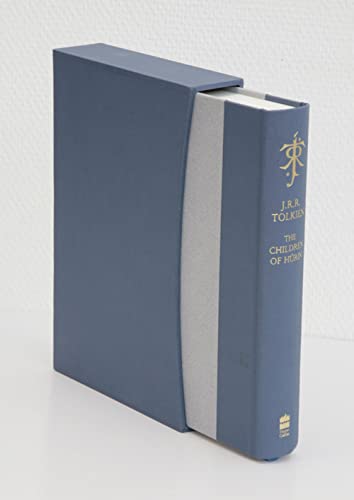 The Children of Húrin
$68.47
TolkienGuide is an Amazon.com affiliate

2677
LanceFormation replied
5 hours ago
J.R.R. Tolkien's The Fall of Númenor

Decades before Peter Jackson directed his epic adaptations of The Lord of the Rings, JRR Tolkien was involved with the first ever dramatisation of his trilogy, but its significance was not realised in the 1950s and the BBC’s audio recordings are believed to have been destroyed.

Now an Oxford academic has delved into the BBC archives and discovered the original scripts for the two series of 12 radio episodes broadcast in 1955 and 1956, to the excitement of fellow scholars.

Tolkien’s fantasy masterpiece was dramatised by producer Terence Tiller, whose scribbled markings on the manuscript no doubt reflect his detailed discussions with the author in correspondence and meetings. Among the typed pages is a sheet in Tolkien’s hand, with red crossings-out, showing his own reworking of a scene.

Stuart Lee, a reader in the English faculty at Oxford University, said: “They said the scripts had been lost, but they have survived – the only professional dramatisation of The Lord of the Rings made during his [Tolkein’s](sic) lifetime. It was not seen as important by the BBC then. It shows how reception of the book has changed – minor interest in 1955-56, now a global phenomenon, with Amazon reportedly investing more than $1bn in the latest series.”

More about this in the article and in the upcoming The Great Tales Never End: Essays in Memory of Christopher Tolkien https://www.tolkienguide.com/store/9781851245659

Weird how the Guardian article mentions Peter Jackson (somewhat irrelevant), but totally fails to mention that the BBC dramatised it again in 1982 (somewhat relevant).

That really was an odd thing to not mention. The mention of the films and Amazon series had no gravity upon the article whereas the mention of the next BBC radio adaptation would surely demonstrate that the BBC was committed to doing it right, or at least allowing an expanded project that Tolkien may have been more pleased with. Especially as they make the point that Tolkien was dismayed at the length.

I wonder if we will ever see these scripts fully realised on the page? I'd think now especially was a good time to make use of them.
Share

Mar 29
2022/3/29 6:01:06 (GMT) Greenwich Mean Time, London, Dublin, Lisbon, Casablanca, Monrovia
Tolkien's [in]famous remark was made in response to this BBC Lord of the Rings broadcast: "I thought that the Dwarf (Gloin not Gimli, but I suppose Gimli will look like his father - apparently someone's idea of a German) was not too bad, if a bit exaggerated. I do think of the 'Dwarves' like Jews..." Letter No 176.
Tolkien discusses these broadcasts in his letters to Naomi Mitchison, No 175 (30 November 1955) and 176 (8 December 1955). Nearly everyone citing "Dwarves like Jews" ignores the context of this remark.
Share