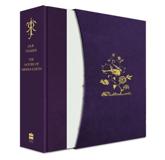 The Nature of Middle-Earth
$70.00
TolkienGuide is a Blackwell's affiliate

The Silmarillion Illustrated by Tolkien

69324
Vanyarin replied
55 minutes ago
J.R.R. Tolkien's The Fall of Númenor

Lembas Extra is in intention annual, but in fact several years have been missed. Several issues have a subtitle. It was started in 1985 in Dutch and English (with several summaries in the other language), from 1990 the language of publication is English, with exceptions noted below.

As of early 2010 it is planned to issue Lembas Extra as a small special section in each issue of the ordinary Lembas, the Lembas Extra sections of each subscription year will then be available for sale as a separately bound volume at the end of the year. Lustrum Conference Proceedings will continue to be published separately.

The book of essays issued in 1983 is something else again, as it was commercially published, entirely in Dutch, by Sirius en Siderius (who published a Tolkien Quizboek [Tolkien Quizbook] with similar cover at about the same time). It was called Lembas Herdenkingsnummer [Lembas commemorative issue], but is best seen as the precursor of Lembas Extra.

[Many thanks to Harm Schelhaas, International Liaison for the Tolkien Society Unquendor in the Netherlands for most of the information in this article. All mistakes are mine by transcription or omission!]