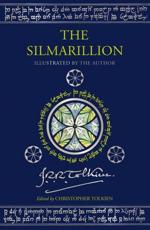 The Silmarillion
$49.89
TolkienGuide is a Blackwell's affiliate Condition: Very Good condition hardcover in Very Good condition dust jacket
The Return of the King by J.R.R. Tolkien Taiwanese "Pirate" Edition of unknown date Very Good condition tan cloth binding with silver gilt printing on spine. Dust jacket has bumping to corners and edges. Small tears & chips along edges. Overall Very Good considering poor quality paper used by publishers of such editions. Includes map of Middle Earth at rear. Taiwanese "Pirate" editions or "Black Market" editions were commonly facsimiles of American or UK editions. Chinese language imprints were sometimes excised, either by importers or re-sellers. This copy has had title page & presumably imprint removed. More information from Hugh Stephens Blog: Back in the 1960s Taiwan was a hotbed of book piracy. In fact, it was the epicenter of a thriving trade in pirated works, ranging from the bestsellers of the day to medical and other expensive textbooks to the Encyclopedia Britannica. At Tan Chiang Book Company, on Chungking Road South in Taipei, full 24-volume sets of the Encyclopedia Britannica retailed in those days at between $40 and $75, whereas the same sets would have cost $400 to $550 back in the US, depending on the quality of the binding. As reported in an article in the November 15, 1963 edition of Life Magazine written by Charles Elliott, “Taiwan’s Bestselling Pirates”, the technique was simple. A Taiwan bookseller/publisher would have a friend purchase a copy of a newly-released book in the US or elsewhere and send it to him via airmail. Once received, it was disassembled, photocopied page-by-page and then reproduced on an offset press, including, reportedly, a new German press purchased with US Government development assistance funds! According to Charles Elliott in his 1963 Life article, in the early 1960s the US started to lean on the KMT government of Chiang Kai-shek to stop undermining the US book market by forcing him to clamp down on book exports, even if the pirate publishers were allowed to remain in business in Taiwan. This was long before Congress had developed any formalized process such as Special 301, and the subtleties of Watch Lists, Priority Watch Lists and Priority Foreign Countries were unknown concepts. Inventory #C84827
Submitted by: Stu
Jump to Last