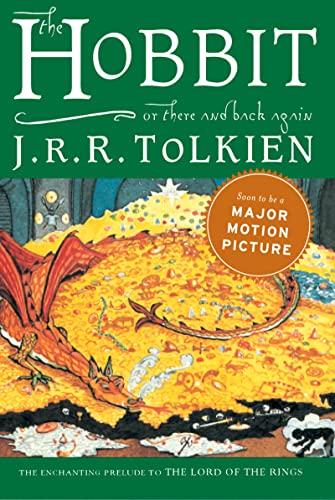 The Hobbit (The Lord of the Rings)
$17.99
TolkienGuide is an Amazon.com affiliate

Mar 28, 2015
2015/3/28 7:37:34 (GMT) Greenwich Mean Time, London, Dublin, Lisbon, Casablanca, Monrovia
Madness. Especially as it isn't even a real hardback, but instead the cheapest bit of tat that HarperCollins could churn out.

It is an 8th Impression Second Edition Hobbit :(

Though it is cheaper than Stu's awesome Sil :(
Share

Apr 11, 2015
2015/4/11 2:12:14 (GMT) Greenwich Mean Time, London, Dublin, Lisbon, Casablanca, Monrovia
This listing has always bugged me due to the laughable price and the claim that the books have the full number-line (despite being sealed in shrink-wrap).

Genuine question asked (by me):
"How do you know the books are 1st impressions, given that the set is in shrinkwrap, and is one that was issued with various impressions over the years?"

"Oh, please, do impart on us your eastern Antipodean methodology possibly relied upon given the available evidence."

I can only assume that means he has no evidence that they are the 1st impression set. I note he doesn't allow for refunds -- maybe he should read eBay's policy a bit more closely.

My copy also has the original price on it £49.99 compared with £55 on the ridiculously priced copy, highly unlikely that these are the first printings for that box set.
Share

Trotter wrote:
I just bought a set on ebay at a bit of a discount from the seller above.

My copy also has the original price on it £49.99 compared with £55 on the ridiculously priced copy, highly unlikely that these are the first printings for that box set.

You did well there, I think.

I had a couple of further messages back and forth with the seller. They were the oddest I have ever had on eBay. As far as I could tell he was just baiting me with each email (as he clearly was with the first one) . e.g.:

Notwithstanding the robotic courtesy afforded by utility of eBay’s messaging system, recipients, generally, prefer a sense of personable mien from one’s initiating inquiry. In that regard, trilobite renditions in the company of a purported air of stuffiness as furnished by your good self, are accordingly accepted and reciprocated upon. In this instance, it was vaguely more than opting for a reply as opposed to ignorance out of sympathy.

Indeed, the evident presumptiveness furnished within your scrawl does border on the risible.

Insofar that you pretend to be given to semantics, I’d proffer that eBay affords its members the opportunity only to access its messaging service; email is something totally different again. I do trust you are capable of discerning one from the other. In any event, ought you be proposed to actually achieve the knowledge in question - smattering as it may be - then kindly devote whatever good senses to your avail in that endeavor. But, then again, you seem to have all the answers, giving rise to the underlying presumption that your initial inquiry was kittle more than a forlorn attempt at superior dialogue leading to a feeble attempt at spoiler humor!

Additionally, as evidenced within your traducible theatrics, you clearly stand by the notion that you provide safe harbor to every further answer imaginable and, accordingly, our efforts to extend to you our efforts previously undertaken regarding this particular volume's provenance, would amount to an utter waste of our resources.

I further hold that any worthwhile ‘education’ rests within the intended’s desire to be conducive to same. In that regard, I believe any polemic enterprise to that end would be a further insult upon time, further to which, your sleeping habits et al, are of no interest to me.

Again, good day. We shan’t hear from you further. "
Share

2015/4/12 14:18:01 (GMT) Greenwich Mean Time, London, Dublin, Lisbon, Casablanca, Monrovia
I could have given you a new (shrinkwrapped) set for less! I mentioned I had these for sale a while back, but nobody in the UK (ideally I wanted a UK buyer as postage abroad is too high) wanted them...