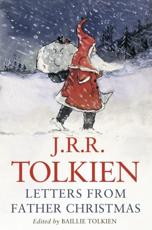 Letters from Father Christmas
$10.78
TolkienGuide is a Blackwell's affiliate

I want to read them all.

Nov 22
2022/11/22 16:18:06 (GMT) Greenwich Mean Time, London, Dublin, Lisbon, Casablanca, Monrovia
Hello, I am new to the world of Tolkien and have recently finished reading the Hobbit. I am now beginning to read the lord of the rings and was wondering if there's a complete reading guide for all of Tolkien's work relating to middle earth.

I like to do things 100%, so a list in reading order of all the works would be greatly appreciated!

Thank you and I look forward to getting more involved.
Share

By the way, the list at the Tolkien Society site omits one book that you might want to look at. Between The Adventures of Tom Bombadil and The Silmarillion there was The Road Goes Ever On. Now most of that book is the music Donald Swann wrote for several of JRRT's poems, and that's not likely to interest readers who (like me) don't read music. However, there are a few pages by Tolkien giving translations from Elvish. While we waited, back in the day, for The Silmarillion -- never really certain that it would be published -- we cherished bits of lore such as are found here. You might want to get The Road Goes Ever On from the library after you read The Adventures of Tom Bombadil. We also were happy to get a couple of further poems by JRRT in a paperback anthology called The Young Magicians, edited by Lin Carter. If libraries bought that one at all, many of the copies will have worn out by now. Still, you might be able to get it on interlibrary loan. The two poems are "Once Upon a Time," a further poem with "Tom" -- presumably Bombadil, and a humorous piece called "The Dragon's Visit." These are not things you "have to" read, but if you want to replicate the experience of being a Tolkien addict back when he was still alive, as well as to enjoy them for their own sakes, these two books might be worth getting hold of. I wouldn't be surprised if the two poems from The Young Magicians are available elsewhere, too -- someone here will help with that. Lastly, there was a JRRT poem, "Bilbo's Last Song (at the Grey Havens)," which was published in poster form, before The Silmarillion was published at last in 1977. I imagine that wouldn't be hard to find reproduced online.

Happy reading to you. How great to be setting out on this journey! Best wishes from a Tolkien reader since 1967.
Share

Nov 22
2022/11/22 23:51:21 (GMT) Greenwich Mean Time, London, Dublin, Lisbon, Casablanca, Monrovia
These are the major publications such as you’d find—with some variations—listed in the front matter of most Tolkien books. I won’t say “don’t sweat the small stuff,” but I think a more exhaustive list that this becomes unhelpful. At least as far as reading order, I think this is about as good a plan of attack as any. I will say, “don’t neglect the non-legendarium writings;” but I will nevertheless mark them so you know what to expect.

Works published after the death of Christopher Tolkien