2022/12/4 11:20:03 (GMT) Greenwich Mean Time, London, Dublin, Lisbon, Casablanca, Monrovia
This is the second article looking at the UK Royal Mail Lord of the Rings 50th Anniversary Stamps, and it gets interesting as we start to look at the various First Day Covers available. There is quite a lot within this so I will be doing a few articles to cover everything.

UK First Day Covers is a little complicated as there are quite a few variations of things to consider. There are 2 main aspects, a; the Cover (usually an Envelope), and b; the Postmark franking the stamps.

For a commemorative release of stamps the UK Royal Mail allows organisations to register and produce their own postmark design for the release. Postmarks must relate to a specific place within the UK. The postmarks usually have a title and an image (as well as the place and date of issue). The organisations which do this are usually a; organisations with an interest/connection to the subject of the stamps being released or b; organisations with an interest in the specific release date. For these Lord of the Rings stamps there were 29 authorised postmarks (although some of these were not specifically Tolkien related). 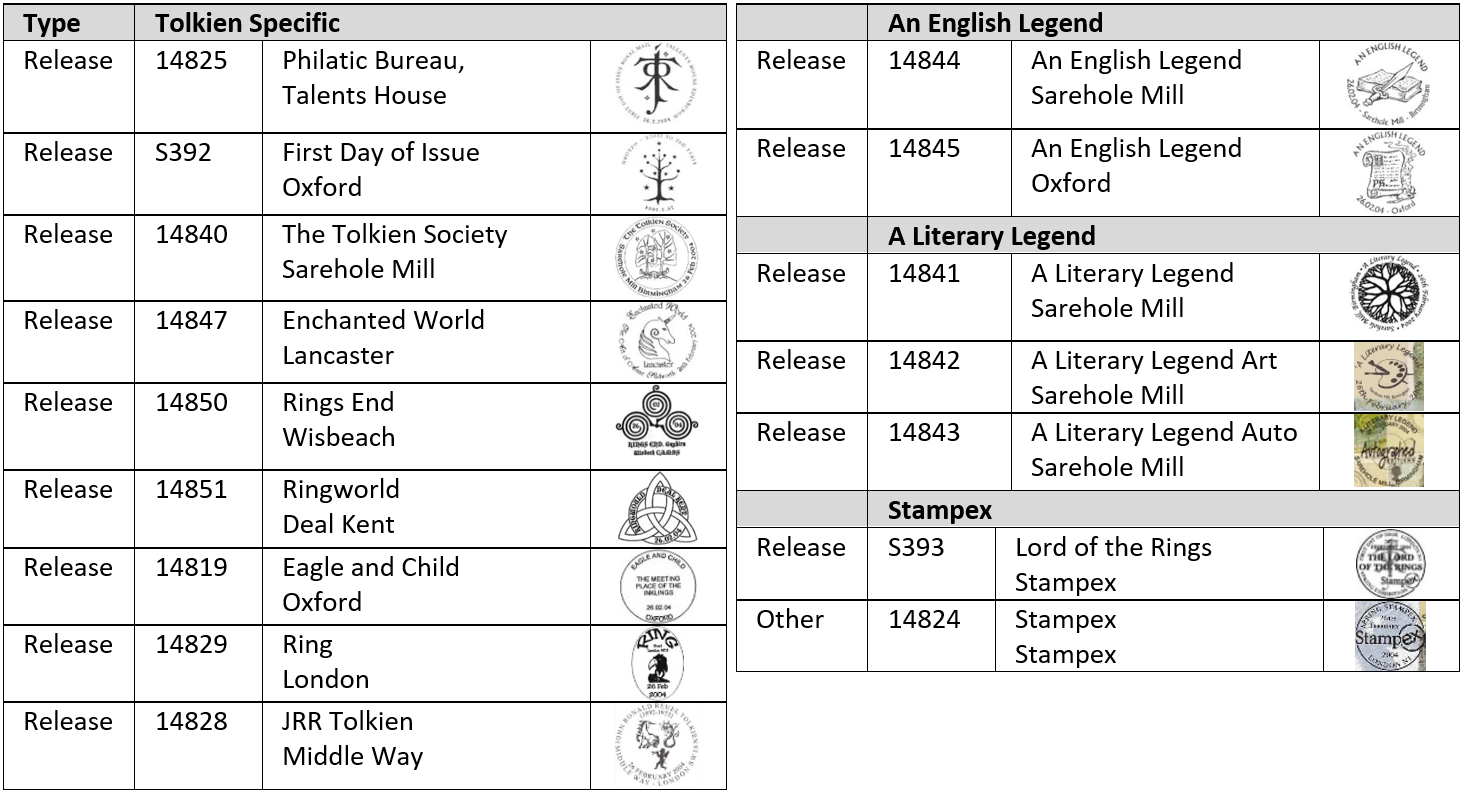 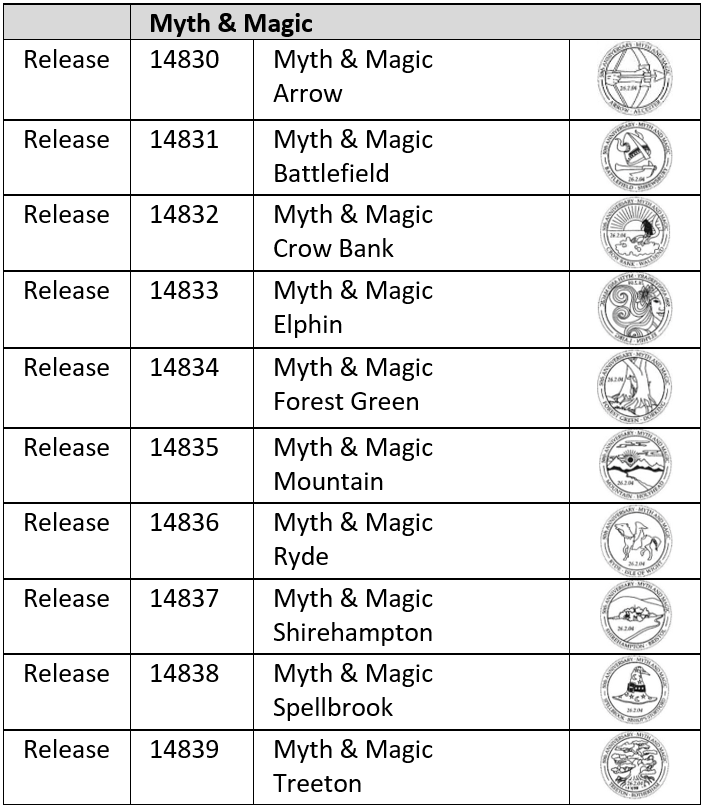 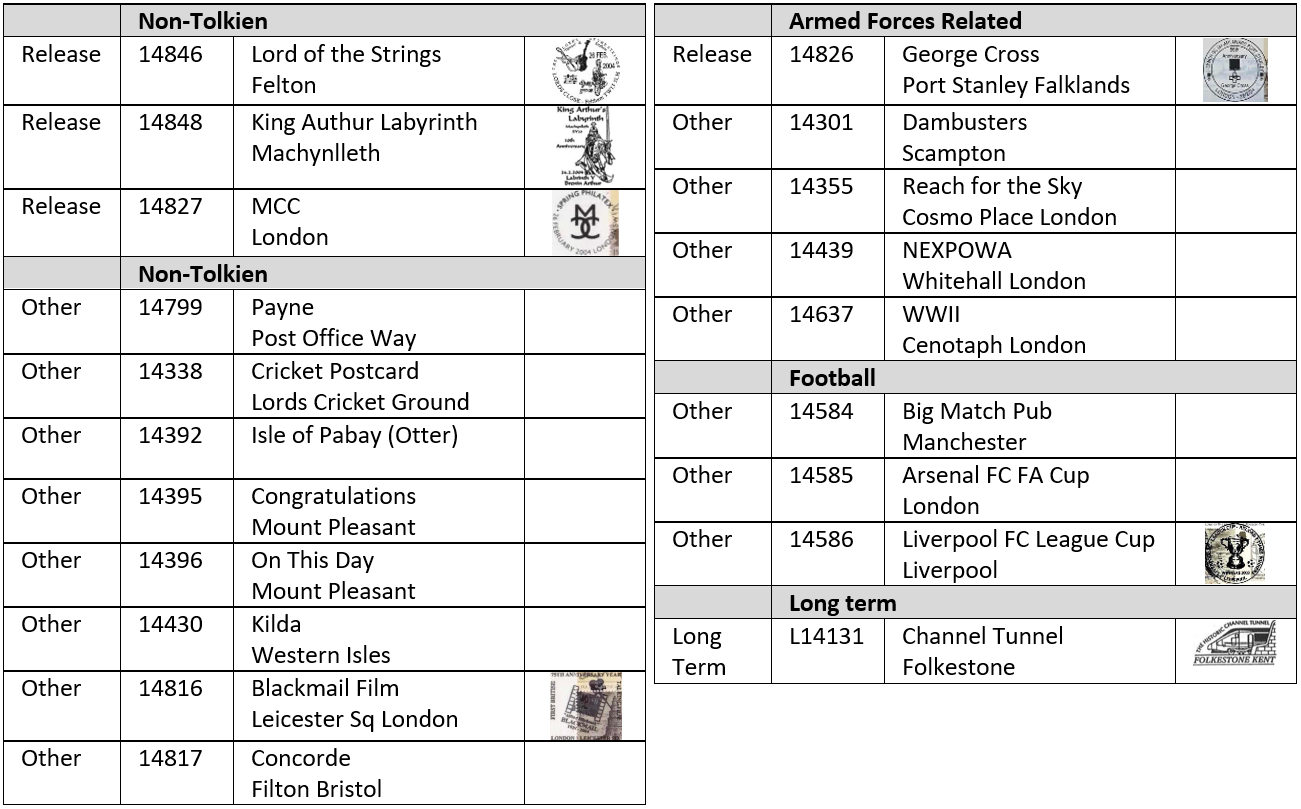 It should be noted that a normal everyday postmark for the release date from any place with the UK is also a First Day Cover, however these are not usually collected.

As well as the Postmark the second aspect of a First Day Cover is the Cover, which is usually an Envelope, but as we will see later, can be other things.

In theory any item with the stamps and an official release date postmark is a First Day Cover, however organisations produce specific cover designs and these are what are collectable. The cover designs don’t have to be authorised so there is no official list of these and defining a complete list is quite hard.

A lot of the time the covers relate to a specific postmark, with organisations producing specific covers for specific postmarks, however, in theory any cover could have been produced with any postmark giving potentially quite a lot of collectable items.

Let’s now look at some of the actual organisations which produced covers for this Lord of the Rings release. I will be showing images of the cover/postmark combinations I have identified to date, there may have been others produced, please let me know if you have or are aware of any others.

The first organisation to look at is the UK Royal Mail themselves. As shown in the Introductory article, Royal Mail produced their own Postmark (a JRRT monogram image, from their Talents House, Edinburgh) and their own Cover (featuring a brown Lord of the Rings bookmark).

This Royal Mail cover can be found with most of the Tolkien related postmarks (although I believe that probably all of them were produced, I just haven’t seen examples of 3 of them), including all of the Myth and Magic postmarks. 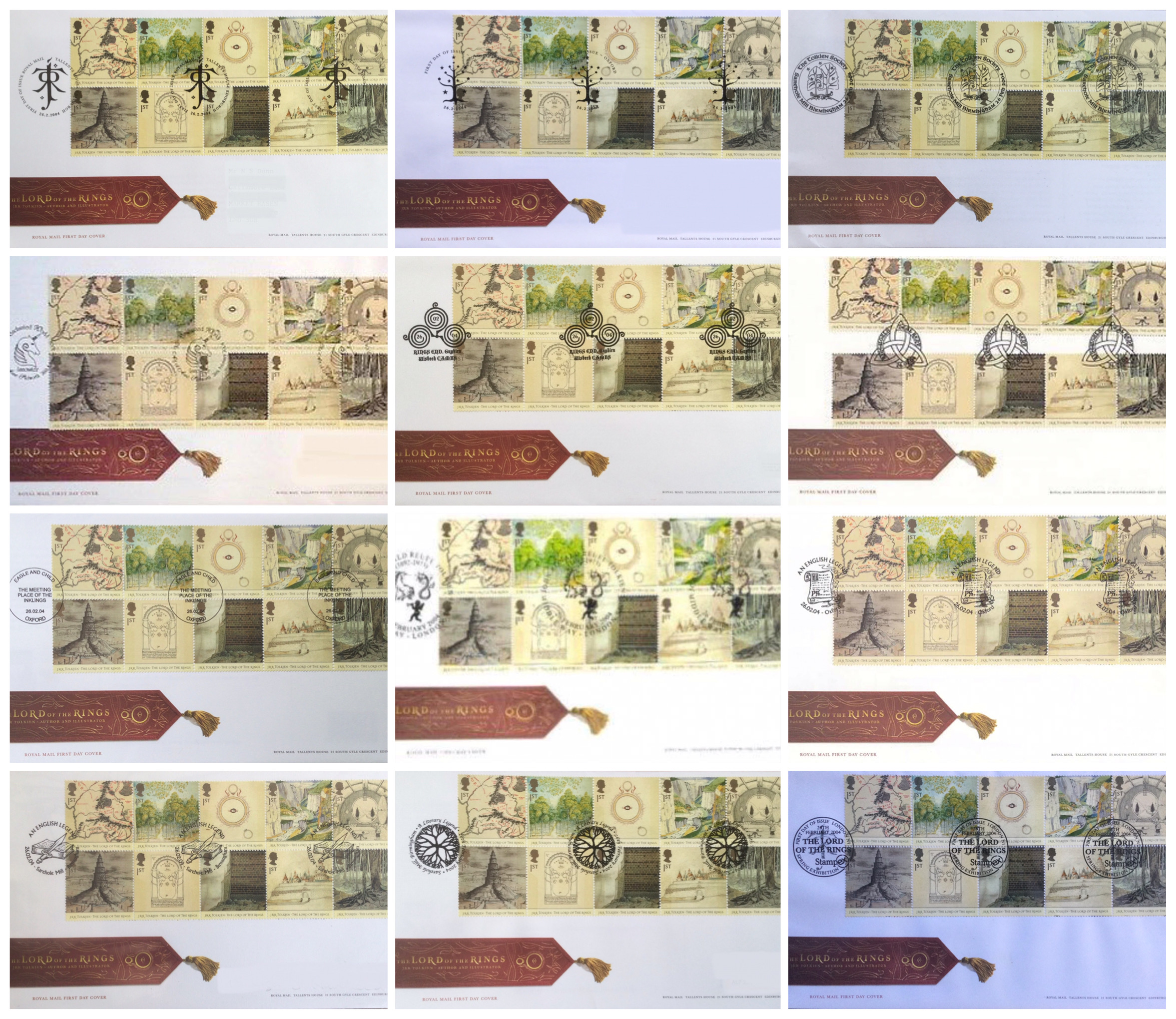 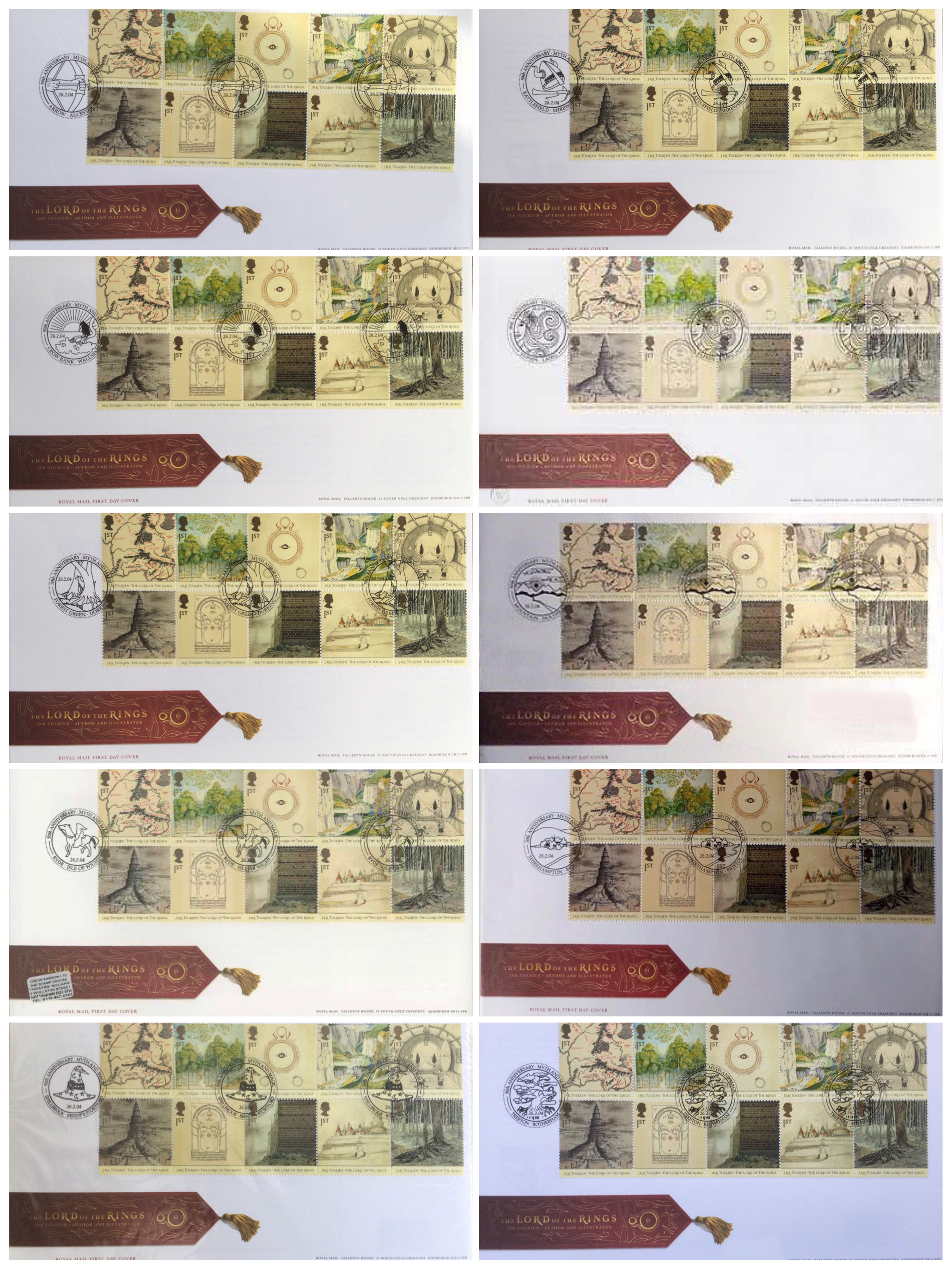 I have only seen 1 of the Non-Tolkien postmarks. 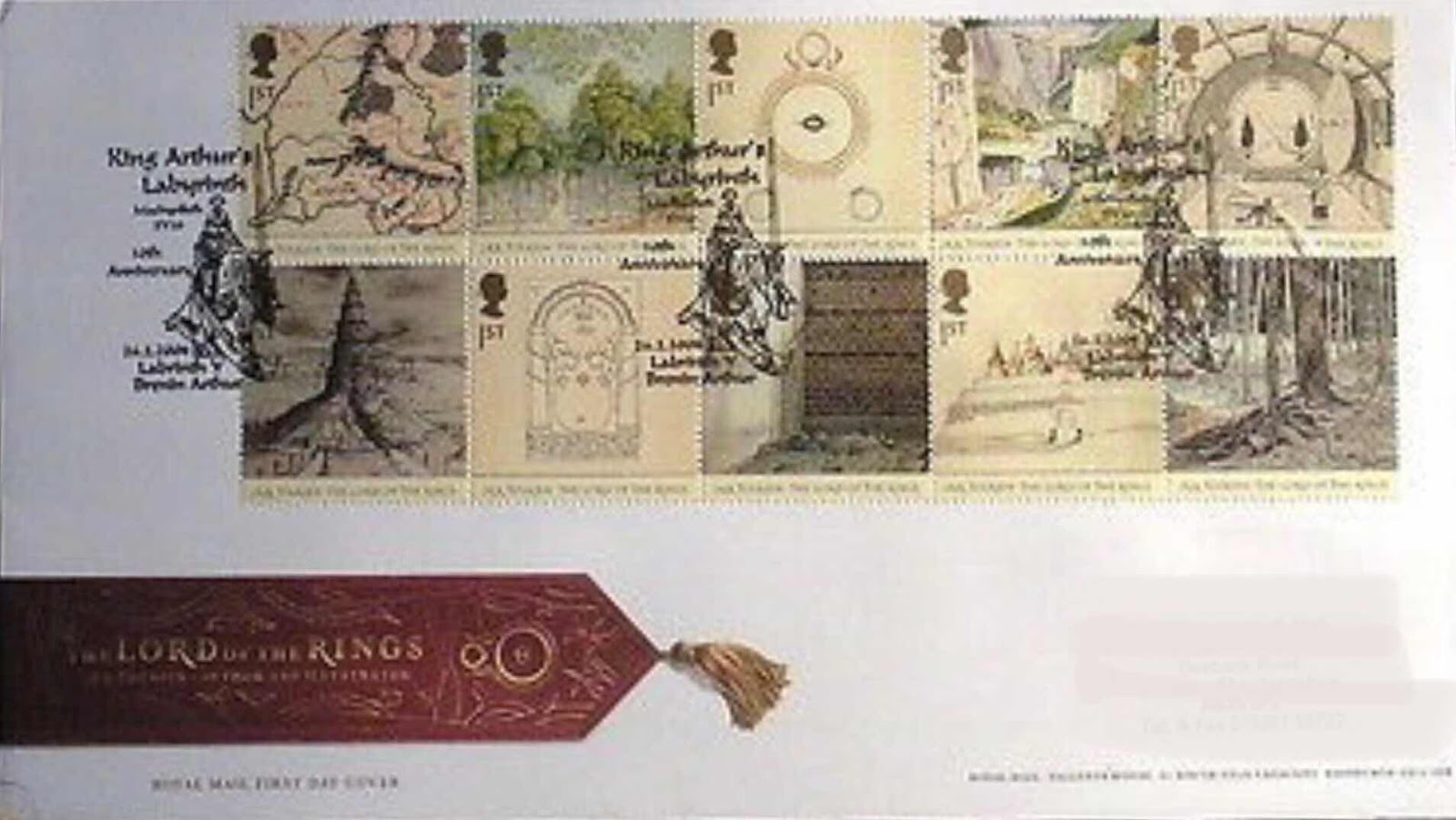 Next we have the 3 major stamp organisations which were producing First Day Covers at the time.

The first is Cotswold Covers. Their cover is quite basic with a ‘C’ left edge, title and small logo. Again this cover can be found with a lot of the specific Tolkien related postmarks, but none of the Non-Tolkien. 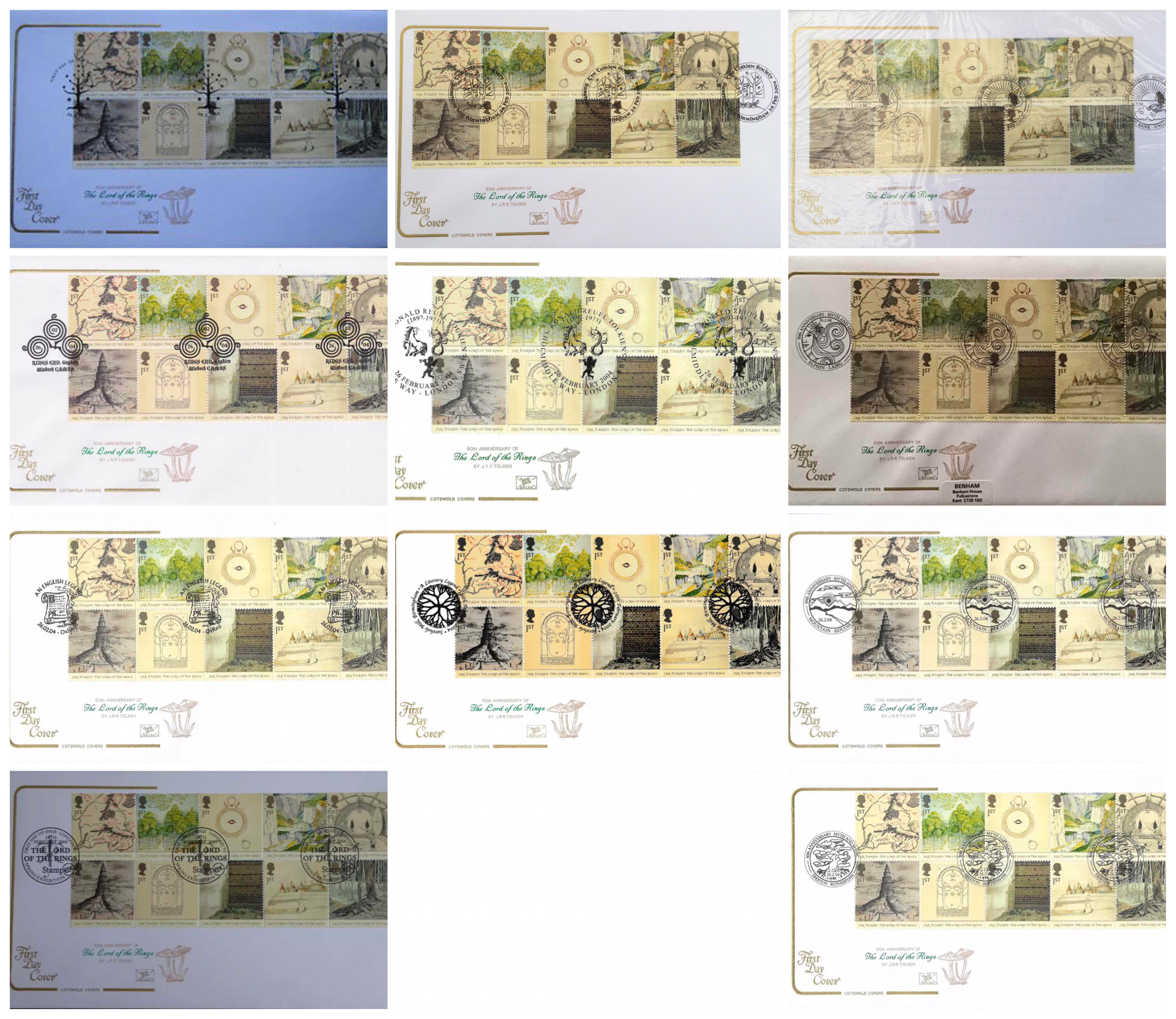 Another major stamp organisation, Stuart Covers, has a similar cover design, with a title and small logo. This cover can also be found with a lot of the specific Tolkien related postmarks, but none of the Non-Tolkien. 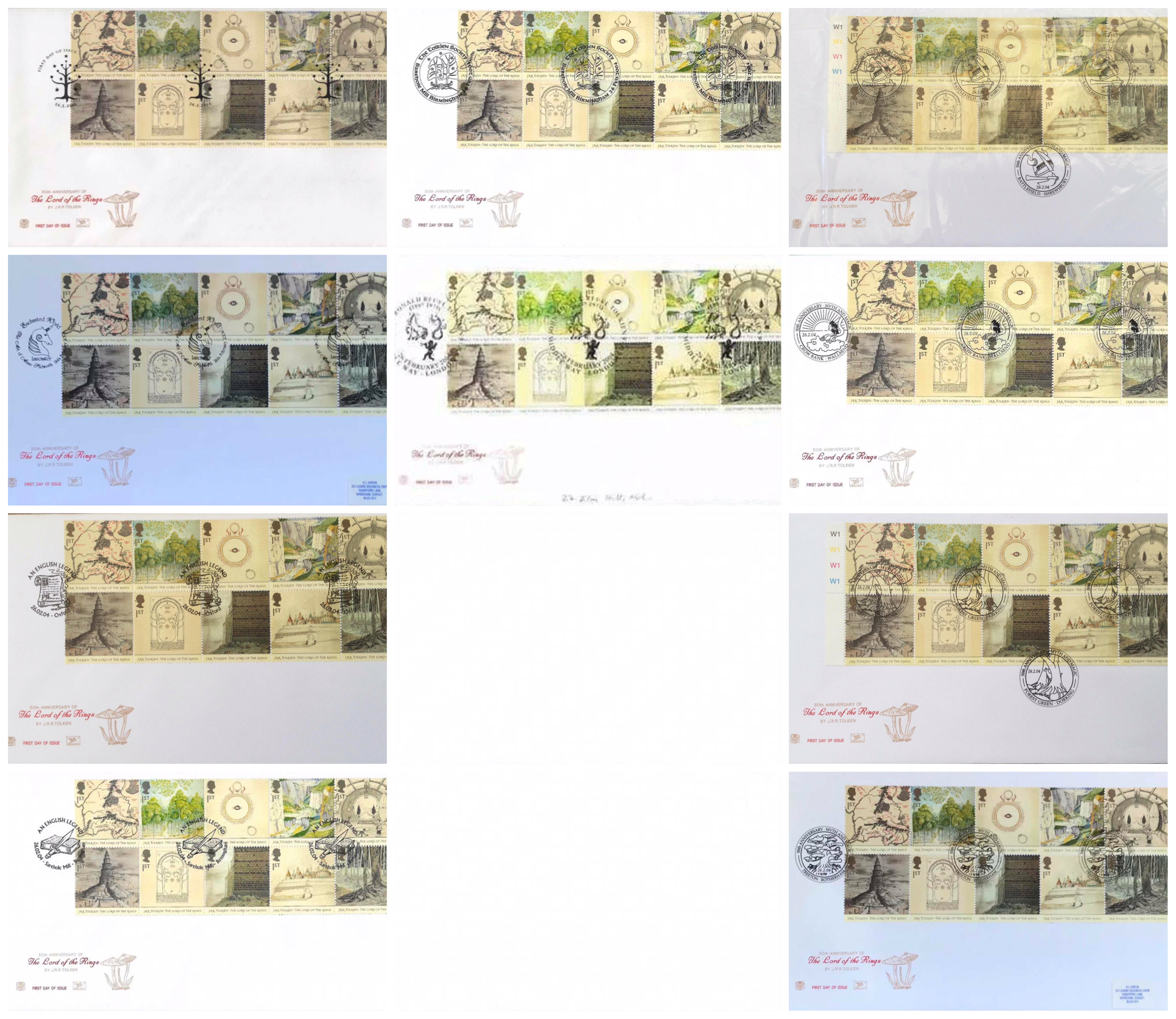 They produced a set of 10 individual covers each with a colourful different image to match a; a specific stamp and b; a specific Myth & Magic postmark. I have not seen these covers with any variations or other Postmarks. 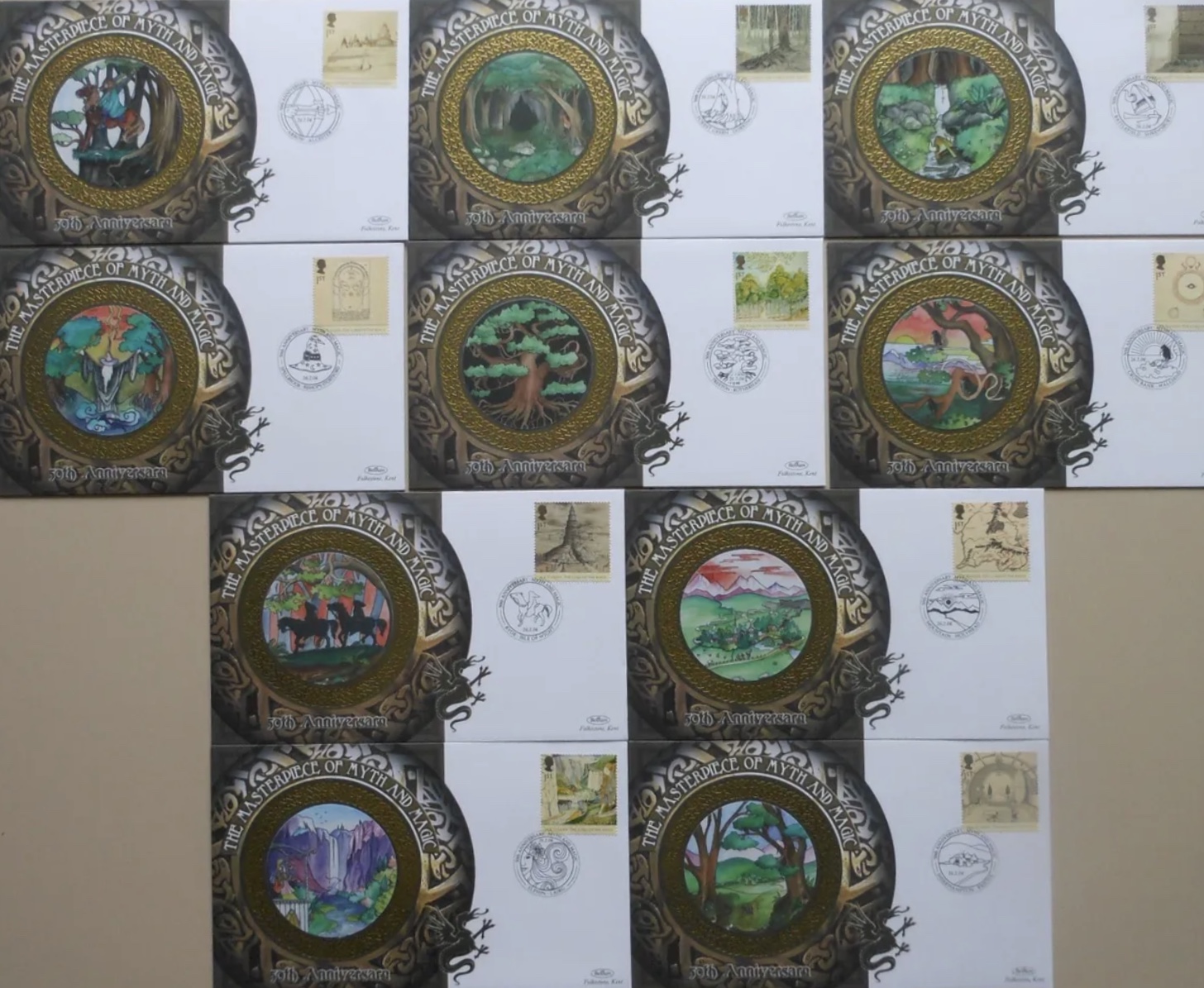 Their second offering was a Myth & Magic Masterpieces cover with the whole set of stamps, which had a Shelob and Sam image along with a Ringwraith side image. This cover has only been seen with a few Myth & Magic postmarks. 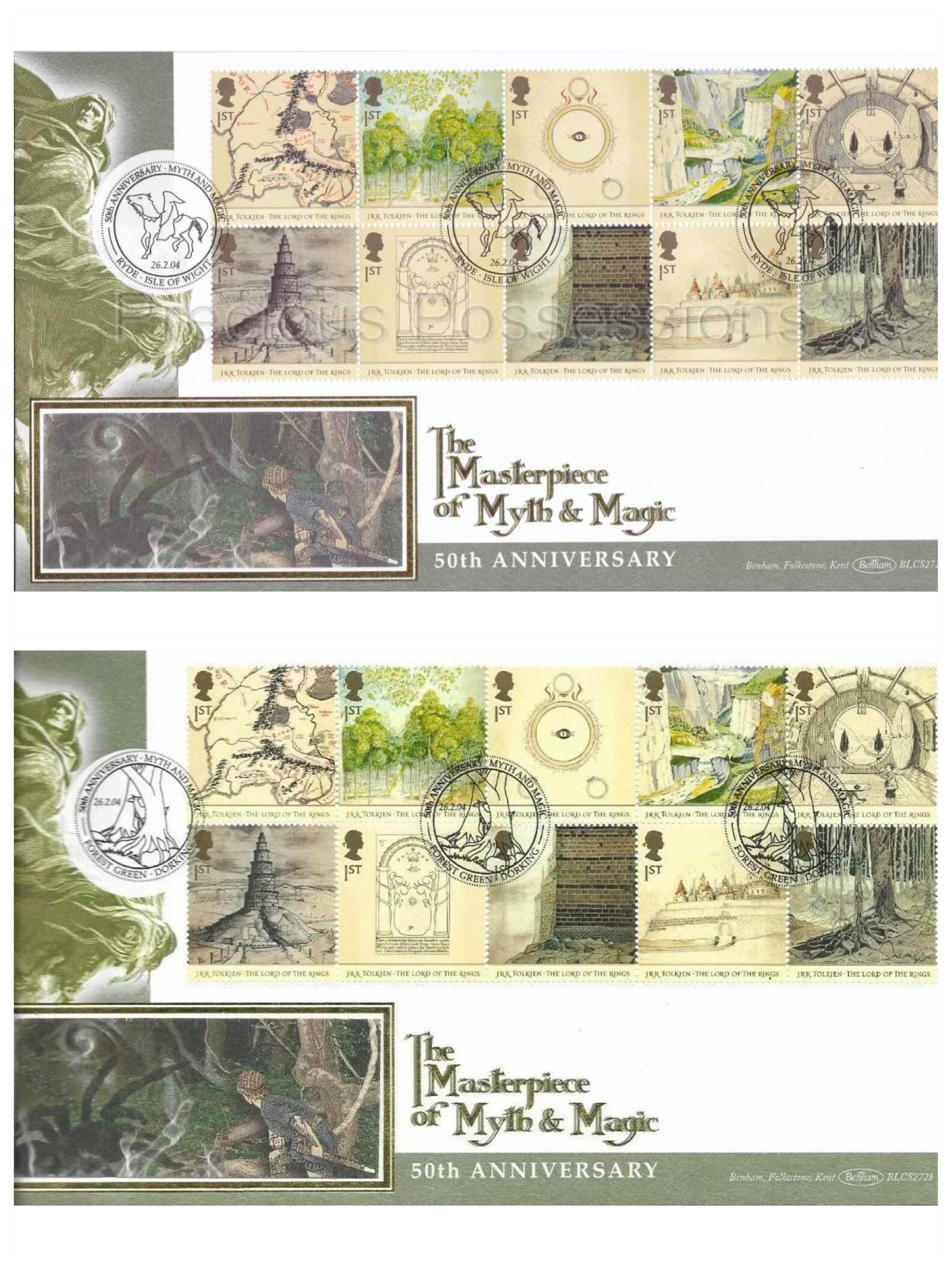 This cover was also produced signed by various Peter Jackson Movie actors. I have seen Andy Serkis and Orlando Bloom. 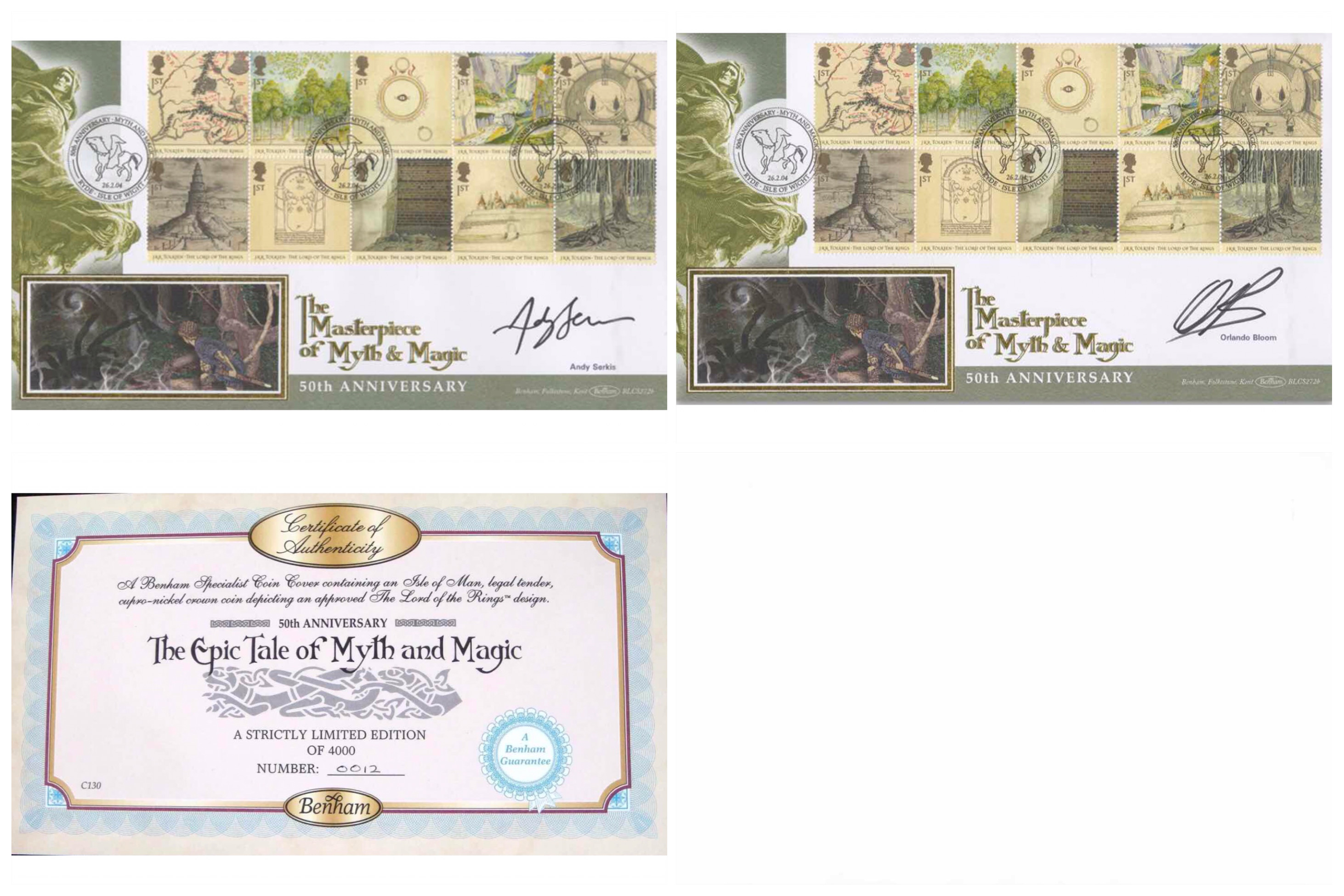 They also produced a Limited Edition Myth & Magic Gold Border cover with the whole set of stamps, featuring a tree image and an elaborate gold border. It was limited to 5000 copies. This cover has only been seen with a few Myth & Magic postmarks. 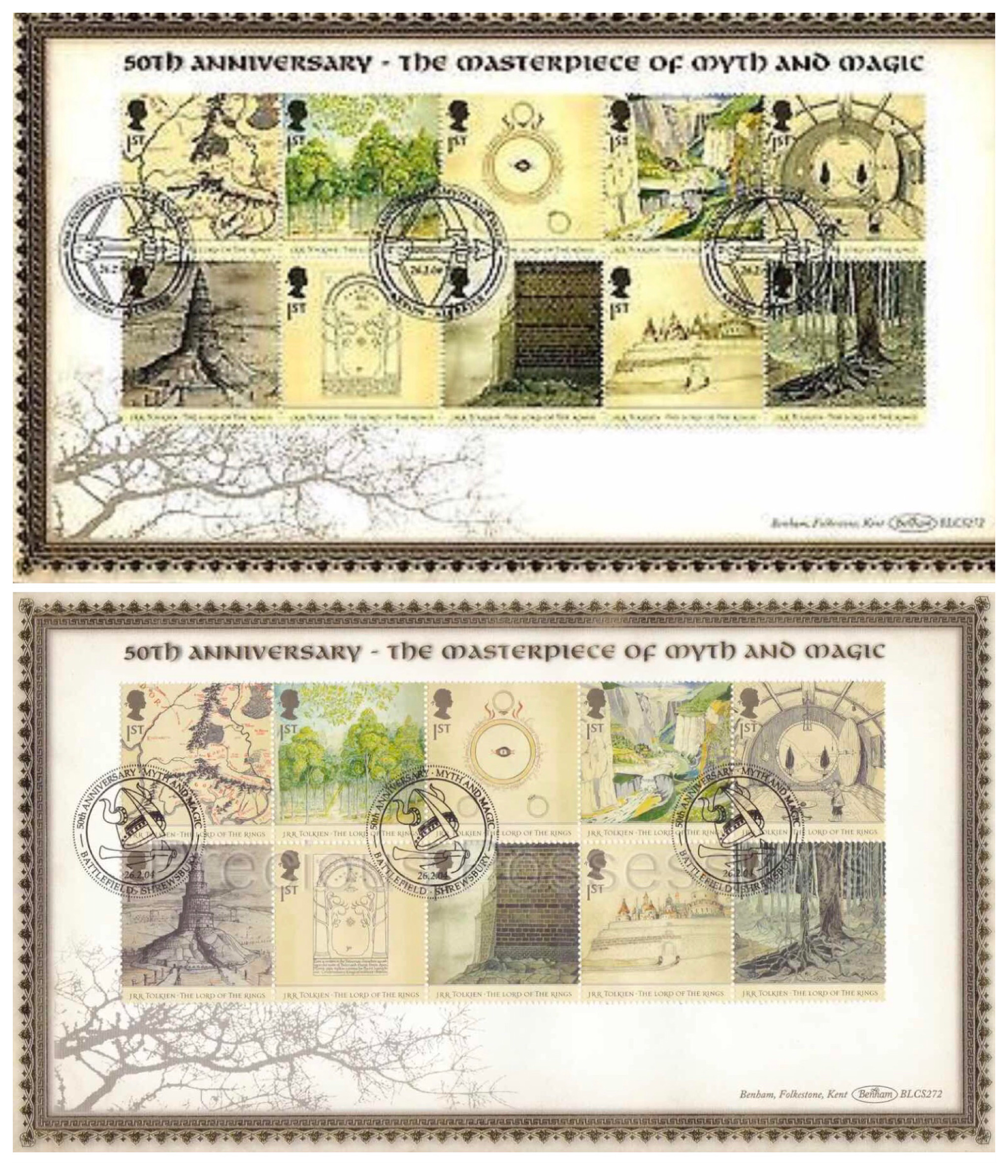 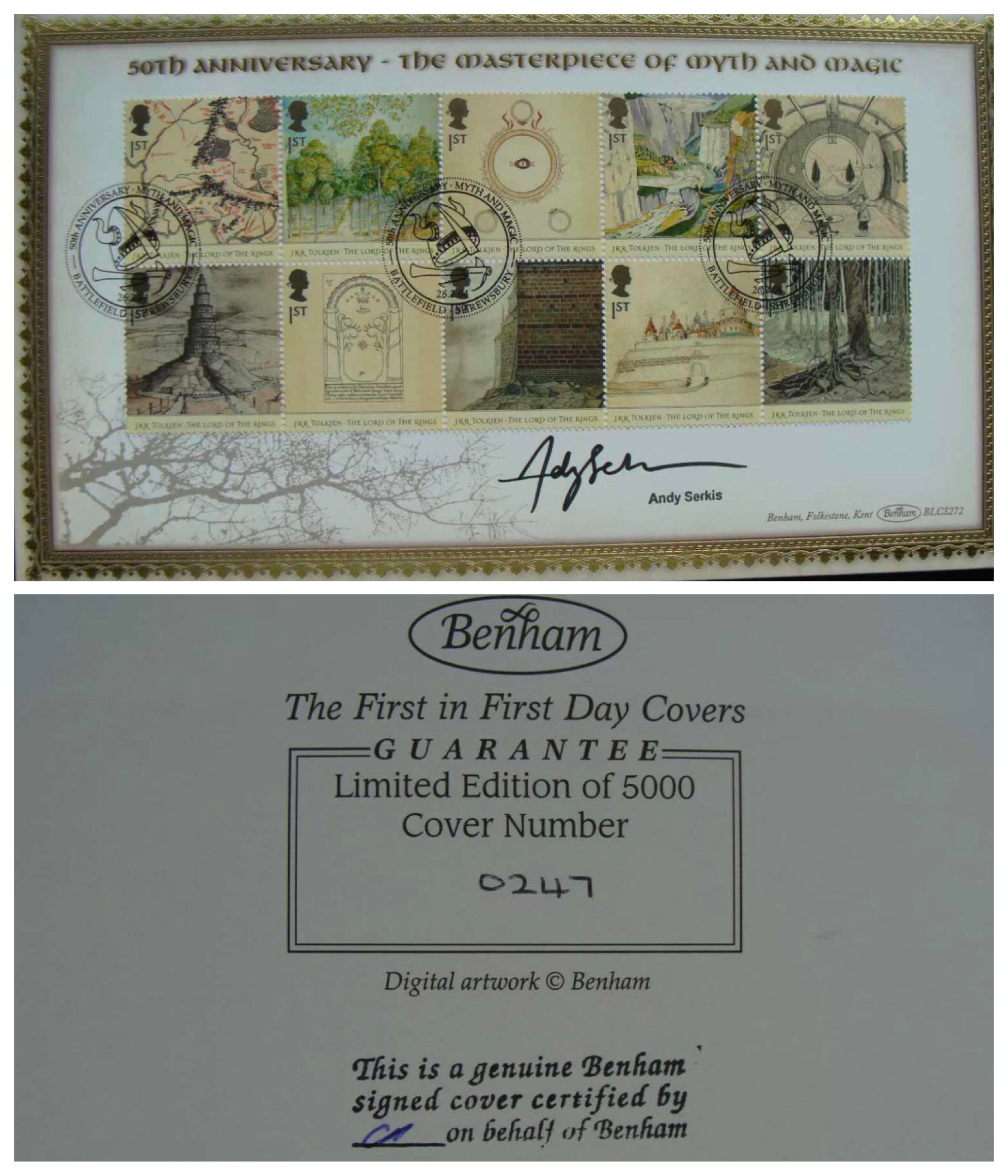 The next Benham cover is a Myth & Magic Epic Tales cover with the whole set of stamps, featuring Treebeard image and a Hobbit Hole image. It also has an attached Isle of Man crown coin. This cover has only been seen with a few Myth & Magic postmarks. 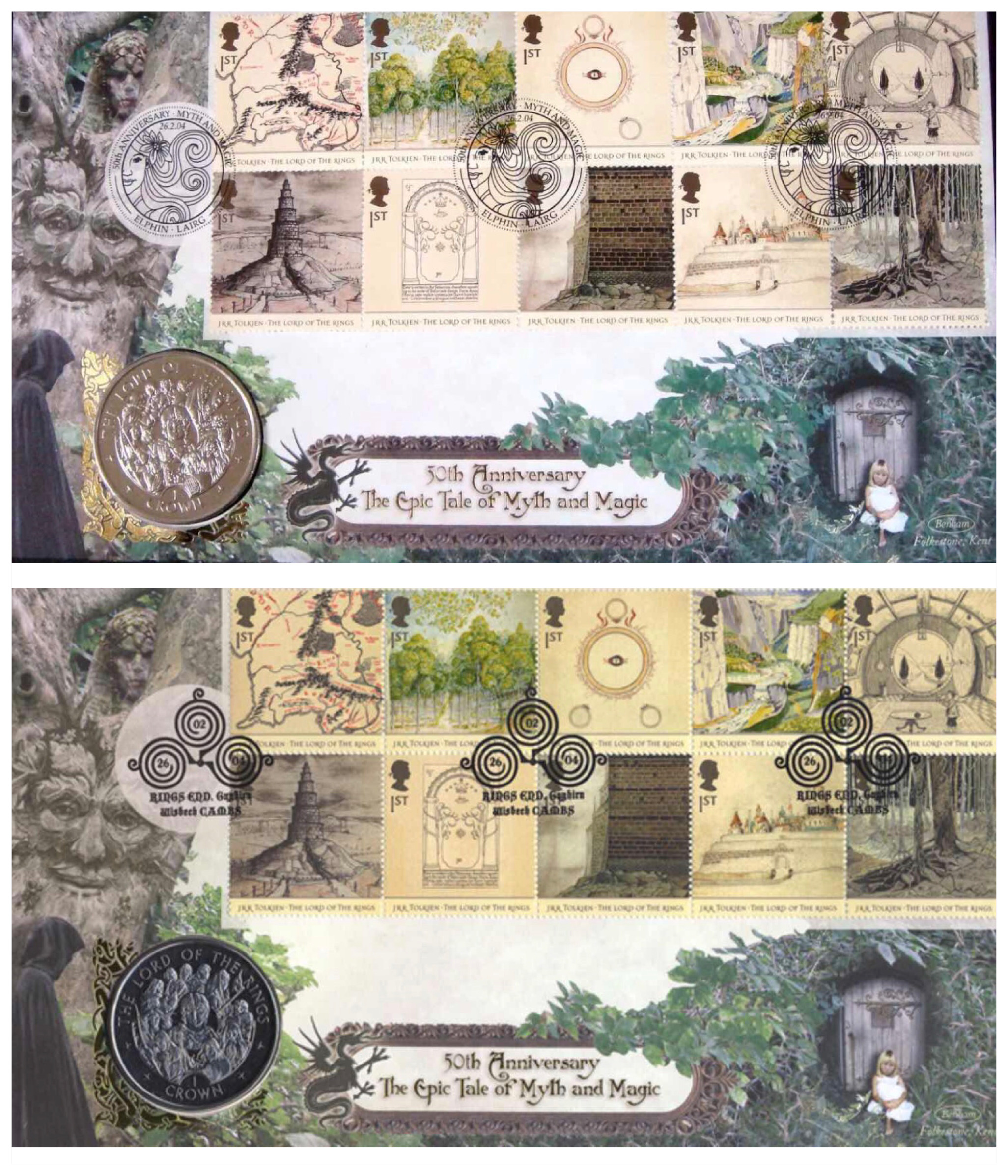 This cover was also produced signed. I have seen Christopher Lee and Tolkien scholar Brian Sibley. 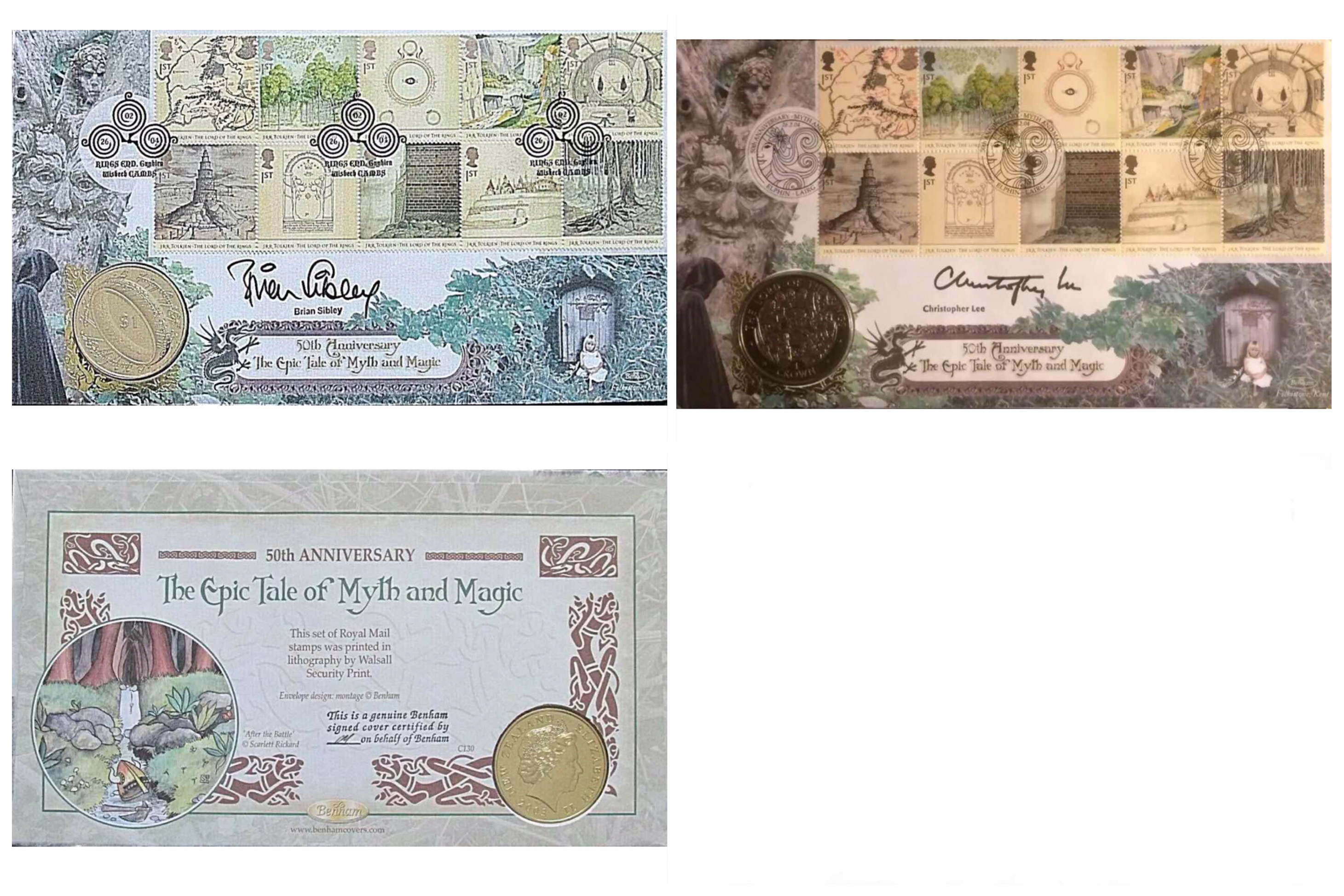 The final Benham cover is a Myth & Magic Epic Gold cover with the whole set of stamps, featuring a 22ct Gold image of a Minas Tirith and round sword emblem. It was limited to 500 copies. This cover has only been seen with a Mountain Holyhead Myth & Magic postmark. Copies were also produced as a duel first day cover with the Isle of Man Peter Jackson Return of the King Movie stamp release from 2003. 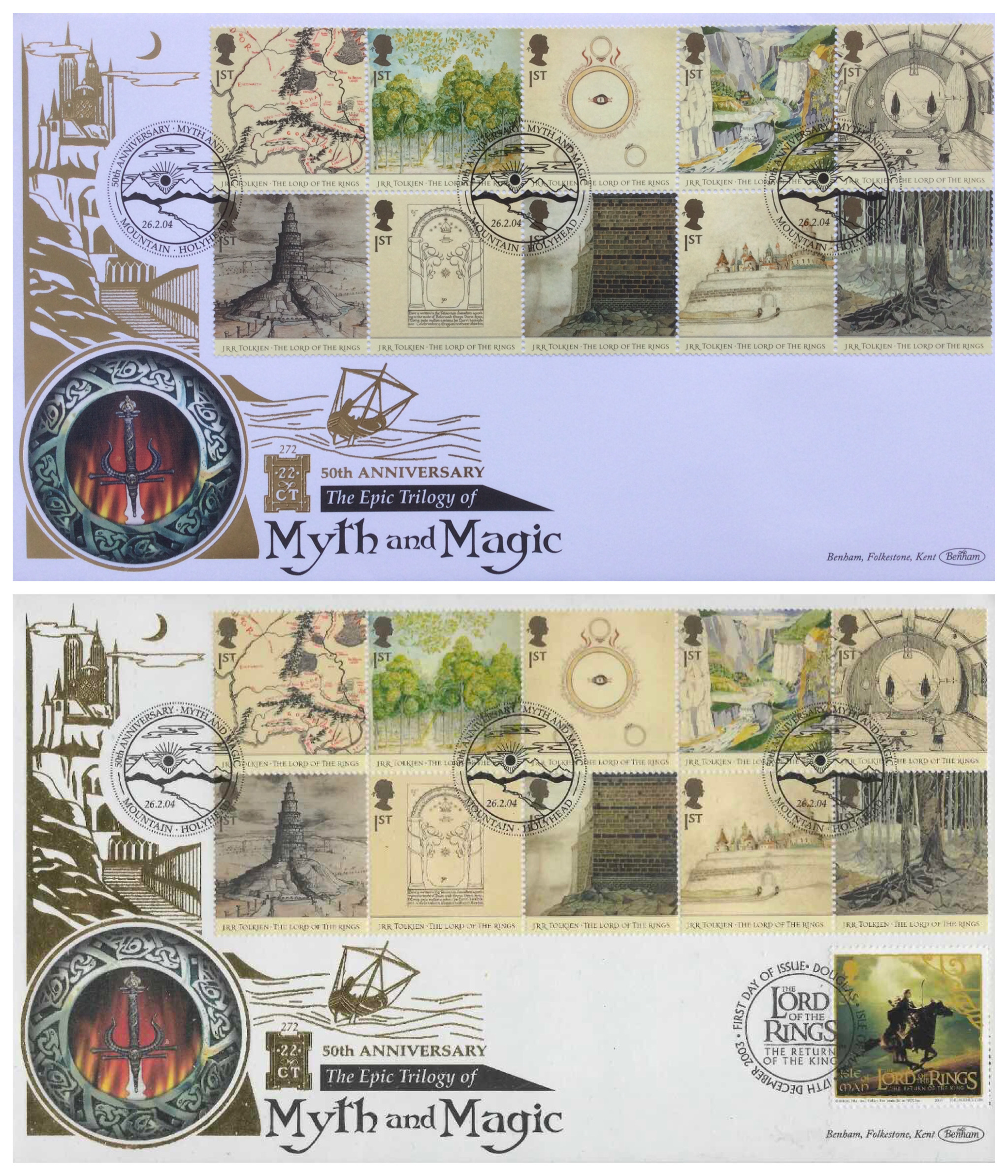 The next Benham covers are in their Pilgrim range and come in a pair of covers with a Pilgrim sword image and half a set of stamps on each cover. These covers have been seen with various Myth & Magic Postmarks. They were limited to 100 copies. 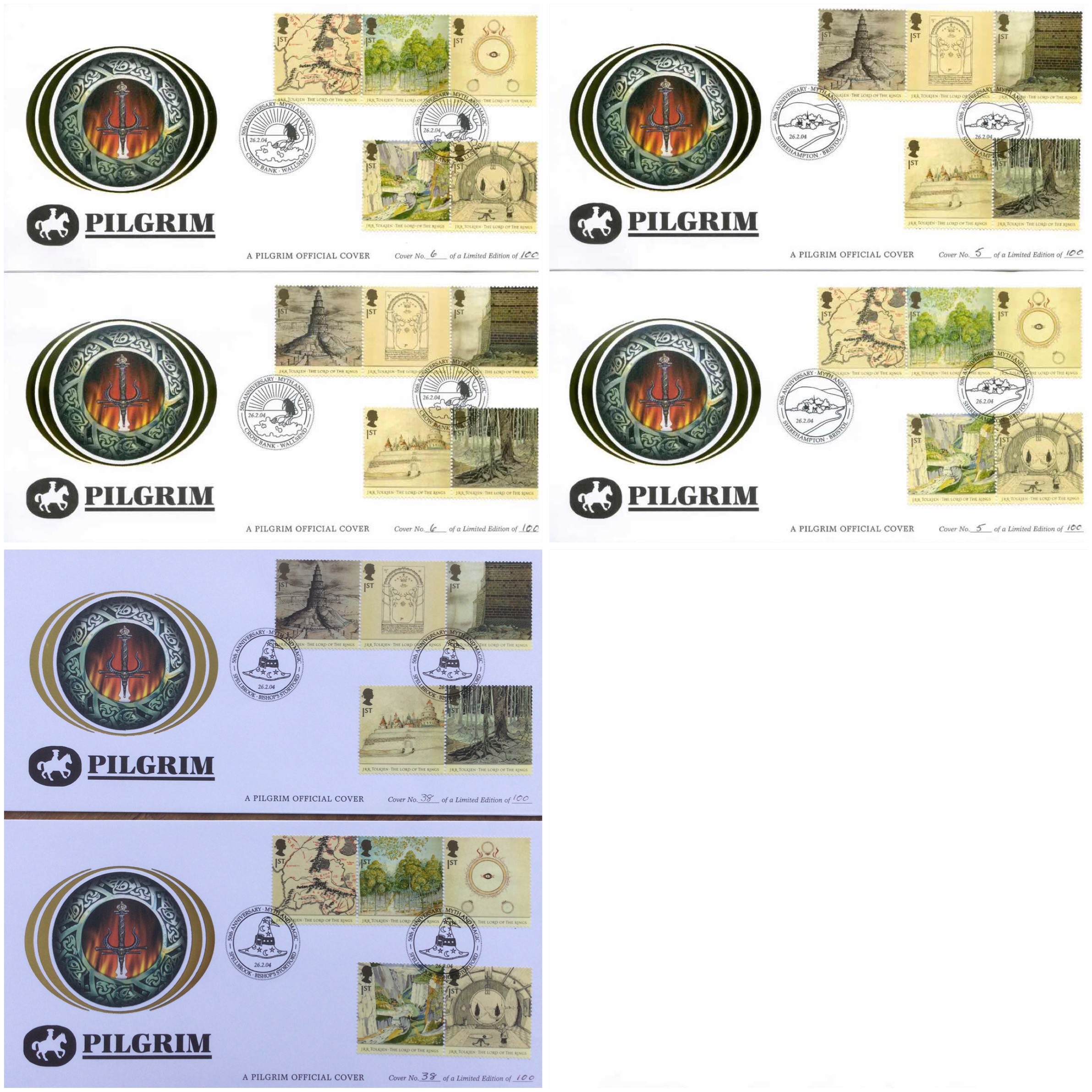 Those are the major stamp organisations who produced covers for the release. In the next article I will look at the covers produced by smaller organisations, including the Tolkien specific organisations.
Share

Dec 6, 2022
2022/12/6 11:09:09 (GMT) Greenwich Mean Time, London, Dublin, Lisbon, Casablanca, Monrovia
Really great Andy. I knew next to nothing about this and it's just a joy reading an article written by someone with in-depth knowledge. Truly Guide material!
Share

367
onthetrail replied
Yesterday
Typo in Ballantine Fellowship of the Ring