The Silmarillion
$23.27
TolkienGuide is a Blackwell's affiliate

648845
Trotter replied
Yesterday
The Wonders of...

1157571
Mr. Underhill replied
Yesterday
List of books published on or by artists inspired by Tolkien

Another signed item from the same seller - no doubt from same source
and guess what? Blue ink !
Again looks poor to me but posted here just so all aware 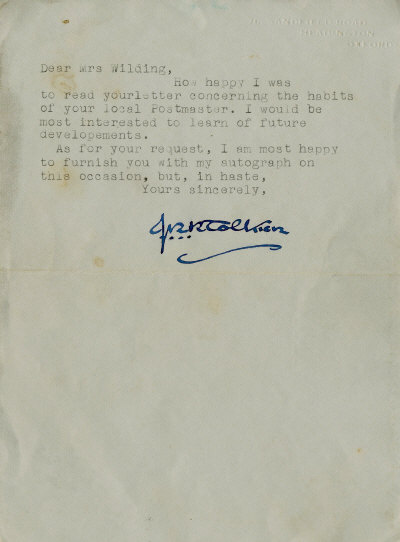 
Here is yet another signed items from the same ebay seller highlighted previously- yes in blue ink.

My good nature is still trying to keep an open mind on these letters. I now see the seller has very kindly taken a photo of the watermark - the previous letters did not have the watermark?
Is the date bit looking right?

Any thoughts from you experts, not that i am thinking of bidding- just curoius i guess but they do look ot be getting better!
Share

The letter supposedly to Mrs Gasch (Pauline Baynes) fits into the known chronology (possibly thanks to Scull and Hammond, not what we meant to enable), but one has to wonder why Tolkien would twice misspell his publisher's name, why Tolkien would be acting as secretary or agent for Allen & Unwin when A&U always wrote this kind of letter themselves, why this should be a typed letter when all of Tolkien's known letters to Pauline (we've handled them) are manuscript, not to mention the usual problems of atypical typewriting, layout, etc., and the curious use of 'finalise' which we expect Tolkien would have considered substandard English.

Once again, it's interesting to look at the seller's other items offered on eBay. These include a questionable T.S. Eliot autograph in the Practical Cats and a tambourine, of all things, supposedly from T.E. Lawrence's home Clouds Hill and autographed by both Lawrence and Winston Churchill. Lots of blue ink, naturally.

According to this article

on the Conqueror web site, up until 1970 the watermark had the tower and the words Conqueror and London. London was dropped in 1970, so this paper looks like it may have been made after 1970. The letter is dated 1962.
Share

Dec 11, 2009
2009/12/11 19:28:31 (GMT) Greenwich Mean Time, London, Dublin, Lisbon, Casablanca, Monrovia
One correction to our post this morning: after checking our Pauline Baynes correspondence files, we find that Tolkien sent her at least two typewritten letters. However, the typewriter font, manner of typing, etc. of those certainly genuine letters are distinctly different from the characteristics of the one offered on eBay.

Christina has spent part of the day looking closely at the chronology of the Tolkien-Baynes-Allen & Unwin exchange in 1962, about which we'll have more to say this evening.

1 August 1962: Tolkien writes to Pauline Baynes (Mrs Gasch) about changes he has made to the poems for the Adventures of Tom Bombadil book. On the same date, Allen & Unwin write to Pauline that they are delighted with her drawings done to date, and that Rayner Unwin will show them to Tolkien in Oxford the next day.

3 August: Tolkien writes to Pauline expressing his own pleasure at the drawings. Also on 3 August, Rayner writes to Tolkien with details about Pauline's schedule for completing the illustrations, and asks Tolkien to lunch with him and his father in London, suggesting that this be on either 22 August or 5 September.

7 August: Allen & Unwin write to Pauline about a mock-up for the book.

9 August: Tolkien writes to Rayner, agreeing on a visit to London on 22 August. He has written to Pauline, and today receives a reply from her that she is proceeding enthusiastically with her work.

29 August: Tolkien writes to Rayner, commenting on the illustrations.

22 November: The Bombadil book is published.

23 December: Tolkien writes to Pauline, commenting on the reception of the Bombadil book.

From this and other correspondence in our records, from the Tolkien, Baynes, and Allen & Unwin archives, it's clear that:

Allen & Unwin, not Tolkien, handled the business end of the Bombadil book. The publisher originated the commission, indicated which illustrations were needed, agreed on remuneration, and showed the finished art to the author. Rayner Unwin would not have engaged Tolkien to write to Pauline on Allen & Unwin's behalf.

There were no arrangements to be 'finalised' between artist, publisher, and author. Everything was working to schedule, and the illustrations were proving entirely satisfactory.

Since Rayner Unwin on 3 August suggested 22 August for meeting Tolkien in London, and the latter agreed to this on 9 August, Tolkien hardly would have tried on 5 August to arrange, on Rayner's behalf, a three-way meeting in Oxford on 25 August.

Apart from the purported letter on eBay, no other document refers to a suggested or scheduled meeting on 25 August.

Good for Trotter in pointing out the watermark problem. To this we would add that the embossed stamp on the eBay lot is entirely different in lettering and arrangement from one on an undoubtedly genuine Tolkien letter of 16 August 1962 -- unless one wishes to suggest that Tolkien had two separate Sandfield Road address stamps and that were in more or less simultaneous use.

It's amazing that these similar letters, among which the somewhat generic but equally questionable one to 'Mrs Wilding' must be counted, have been coming on the market now for more than a year. Beren once said in this forum that he was going to dig into the matter further: has he come up with anything?

Dec 12, 2009
2009/12/12 7:43:05 (GMT) Greenwich Mean Time, London, Dublin, Lisbon, Casablanca, Monrovia
Great timeline Christina and Wayne
As I suspected!
I 100% agree with Jlong. Even with the facts aside this seller has never offered a half decent explanation as to how they came in possession of so many letters/items addressed to so many people.

The real disappointing thing for me is that people keep paying huge amounts of money for something which is clearly forged and I would concur that these are being produced by one person who is trickling them onto the market. Its happened before with other art/etc and it wouldnt suprise me if this is a similar scam driven by the huge amounts of money involved.

Look forward to more exciting items from this seller!
Share