That's speculation, not what I wrote. I was engaging in discussion. They were the ones to speculate.
Share

That's speculation, not what I wrote. I was engaging in discussion. They were the ones to speculate.

insurrbution - Can you please just do as the mods ask. You have a habit of driving discussion into pure speculation and have been asked to try to resist this on several occasions because it just makes for very long threads with almost no useful content (or at least the useful content is hard to find). If you have actual facts or new information to add, post away, but pure guesswork is not welcome. No one cares about your guess any more than they care about mine. The odd speculative statement that happens here and there isn't an issue, it is the systematised speculation that you are partial to that has led to some concern being voiced by other members regarding the wheat/chaff ratio. This is a small community and you have to adhere by its cultural norms.
Share

Nov 20, 2020
2020/11/20 3:18:18 (GMT) Greenwich Mean Time, London, Dublin, Lisbon, Casablanca, Monrovia
I didn’t know the cover illustration is by Ted Nasmith until I did a google image search and discovered it is “The Light of Valinor on the Western Sea“ which was used in the 2004 Harper Collins illustrated edition of The Silmarillion.

2020/11/20 16:52:44 (GMT) Greenwich Mean Time, London, Dublin, Lisbon, Casablanca, Monrovia
Amazon UK now has a listing without a price. EDIT: Thanks to Trotter for highlighting that the UK price is £25. Geo restrictions stopped me from seeing it.

Amazon DE has listed the Kindle edition with a price. €32.64
Share

First ever publication of J.R.R. Tolkien’s final writings on Middle-earth, covering a wide range of subjects and perfect for those who have read and enjoyed The Silmarillion, The Lord of the Rings, Unfinished Tales, and The History of Middle-earth, and want to learn more about Tolkien’s magnificent world.

It is well known that J.R.R. Tolkien published The Hobbit in 1937 and The Lord of the Rings in 1954–5. What may be less known is that he continued to write about Middle-earth in the decades that followed, right up until the years before his death in 1973.

For him, Middle-earth was part of an entire world to be explored, and the writings in The Nature of Middle-earth reveal the journeys that he took as he sought to better understand his unique creation. From sweeping themes as profound as Elvish immortality and reincarnation, and the Powers of the Valar, to the more earth-bound subjects of the lands and beasts of Númenor, the geography of the Rivers and Beacon-hills of Gondor, and even who had beards!

This new collection, which has been edited by Carl F Hostetter, one of the world’s leading Tolkien experts, is a veritable treasure-trove offering readers a chance to peer over Professor Tolkien’s shoulder at the very moment of discovery: and on every page, Middle-earth is once again brought to extraordinary life.
Share 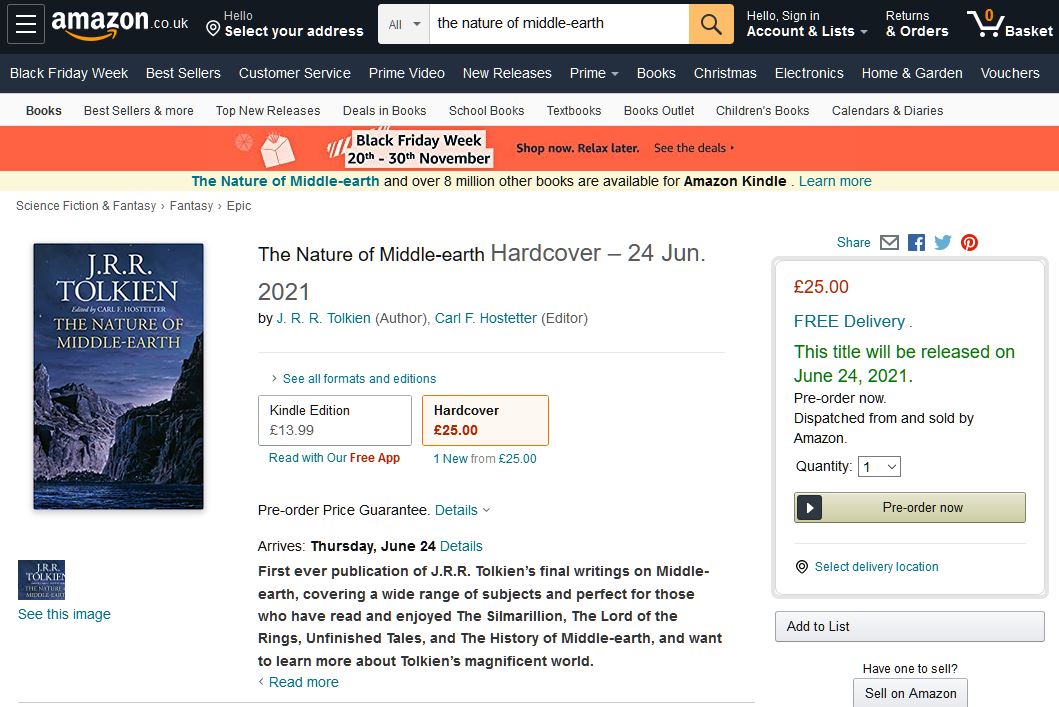 Strange. No price listed for me Trotter

Are you in the USA/Outside UK. Amazon have changed listings a bit in last while not showing prices when product is not available to ship to your location.

Shipping locations may be added/updated over time.

Conversely, The Houghton Mifflin Edition is not available to me for shipping from Amazon.com (I am in Ireland).

This may all change closer to release (or maybe not).
Share

68
Mr. Underhill replied
4 hours ago
The Lord of the Rings and The Hobbit creator JRR Tolkien