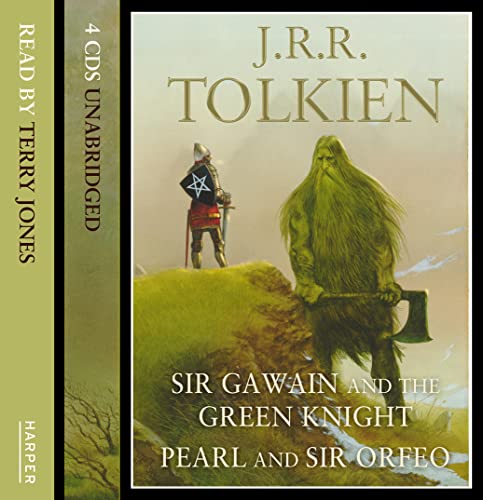 Sir Gawain and the Green Knight: with Pearl and Sir Orfeo
£17.06
TolkienGuide is an Amazon.co.uk affiliate

1968 to 1978 was the golden decade for Tolkien fans who love puzzles. International Polygonics was given permission to use the artwork of Pauline Baynes and J. R. R. Tolkien himself, amongst others, and produced immensely popular and collectible jigsaws. I had the opportunity to talk with the publisher Hugh Abramson about the history of International Polygonics and the Tolkien related puzzles they produced. I asked him how he started in becoming a puzzle publisher. "At the time the puzzles in the gift (as opposed to toy) industry were dominated by Springbok, a division of Hallmark, which only produced fine art puzzles. I thought that fine art belonged in museums and that illustration gave a more interesting, more playful look.... Hard as it is to believe today, when IPL first started producing Tolkien puzzles, Lord of the Rings was strictly counter-culture, known only to the baby-boomers and bookstores. So we sold to bookstores and began to do the American Bookseller show. Eventually our company started publishing books.... Bookselling in the 70's was a great deal different than it is today. Still one of the first to carry our line was a small local NYC chain called Barnes & Noble."

"I first read Lord of the Rings in the mid-60's like everybody else, and that was some years before I even thought of jigsaw puzzles." Hugh didn't start out looking to do a Lord of the Rings puzzle. He was visiting Betty Ballantine, "trying to get permission to use some entirely different material for a puzzle, and she suggested the Remmington painting. Once licensed, I then sold the puzzle (along with a Dore Don Quixote etching) to Book of the Month Club to use as a double book dividend. When the club sold through what was then an entire production run, I figured we were on to something." "The original Ballantine paperback editions of the trilogy when placed alongside each other formed a mural. Ballantine produced a poster for bookstores to promote the series, and after discovering that the stores were selling the poster, made them commercially available. Thus, bookstores began to carry posters as sidelines. After we started producing the puzzles, bookstores began selling puzzles as sidelines too." The "Middle-earth Mural" puzzle was a big hit, and was reprinted in a new box format in 1972. Barbara Remington had to paint the cover art for The Hobbit and The Lord of the Rings in a terrible rush, with no time to read the books. She based her artwork solely on the accounts of acquaintances she could track down who had read the books. In 1973, Ballantine changed the paperback book cover art to paintings done by J. R. R. Tolkien at the request of the Tolkien estate, who had never really liked Barbara's artwork (Barbara agrees, and talks about it in this interview). Around this time, Hugh says "the [Tolkien] family contacted me through Rayner Unwin, head of Allen & Unwin, Tolkien's original publisher, and wanted us to use Tolkien's and Pauline Baynes' art. Pauline was the leading British children's illustrator and the only artist Tolkien himself approved to do illustrate his work. She also did the original Narnia covers for Tolkien's colleague C.S. Lewis.... The Tolkien family didn't like the [Barbara Remington] painting and suggested I do illustrations either by J.R.R. or Pauline Baynes." In 1976 "The Hobbit" - a two sided jigsaw puzzle was released. On the front side of the puzzle was Tolkien's "Bilbo Comes to the Hut of the Raft Elves". On the back side was Pauline Bayne's "There and Back Again", a map of Bilbo's travels in The Hobbit. The box was meant to resemble the cover on the Ballantine paperback edition. This puzzle was a runaway hit. It is a lot of fun to put together, though the artwork on either side is different enough that there is really not much added challenge because it is two-sided. I have seen many copies of "The Hobbit" puzzle, and it seems like they are all cut differently! Hugh says, "The puzzles were die cut. When a die wore out, it was replaced, not necessarily with an exact duplicate." Because "The Hobbit" was so popular, it went through a large number of dies. This makes it hard to buy more than one incomplete puzzle to try and make a single workable puzzle. In addition to "The Hobbit", more puzzles with the artwork of JRRT and Pauline Baynes were quickly released. "We published them as we saw fit. The family seemed happy with us, and nobody was paying that much attention to the author until The Silmarillion came out," says Mr. Abramson. "The Map of Middle-earth" by Pauline Baynes shows not only the map, but has illustrations of the nine fellowship members, the Nazgûl and locales from The Lord of the Rings. This artwork was previously released in the UK as a poster, and used on the Ballantine trade paperback boxed set in the early 1970's. "Bilbo's Last Song" was also printed in 1977 with artwork from Pauline Baynes. "Bilbo's Last Song" the puzzle is sometimes claimed as the first American edition of the poem, but this is not true. It is the first time in America that the British edition (with the Pauline Baynes artwork) was printed, but Houghton Mifflin released the true first edition of the poem in April of 1974 as a poster, with a photograph by Robert Strindberg as background art. The box artwork correctly proclaims this to be "The first American publication of the British edition." Also in 1977, International Polygonics released another puzzle with artwork from J. R. R. Tolkien, titled "J. R. R. Tolkien's Father Christmas". As Mr. Abramson says, at the time "the only authorized non-book Tolkien products were Ballantine's calendar and our puzzles." This is the evidently the only authorized poster-sized edition of any of the Father Christmas artwork (though the same illustration was December in the "1979 J. R. R. Tolkien Calendar" published by George Allen & Unwin), and probably the most difficult puzzle to find with Tolkien's artwork. Very collectible! The last Tolkien puzzle released by International Polygonics in 1977 was "Portraits of J. R. R. Tolkien". It consists of three photographs of JRRT himself in various poses, taken by Billett Potter. These photos have been published in many other places, but are combined here to give a nice glimpse of Tolkien in his later years.

In November of 1978, Ralph Bakshi's The Lord of the Rings movie was released. There was a lot of anticipation built up for the movie, as the books had gained enormous popularity over the past two decades. International Polygonics worked very hard to get material from the film that they could reproduce as giant puzzles. Two puzzles, "Gandalf and Frodo" and "Gollum" were released in 1978, and the well recognized image of "Glamdring - The Sword of Gandalf" was released in early 1979. The movie ended up not doing well, causing a lull in Tolkien licensed materials and an end to the International Polygonics run of Tolkien related puzzles.

The button seen at the top of this article was a promotional giveaway starting in 1978. After pointed questioning, Hugh admitted responsibility for the terrible pun.