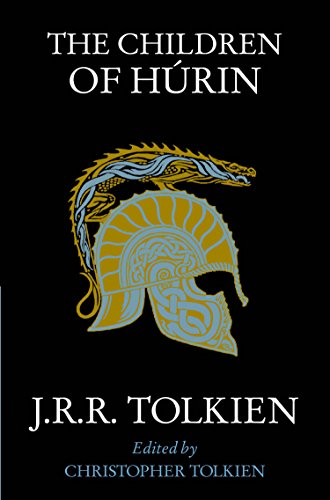 The Children of Húrin
£5.49
TolkienGuide is an Amazon.co.uk affiliate

766179
Trotter replied
Yesterday
In search of the world’s most valuable books, letters and laws

162
onthetrail replied
May 24
The Art of Jay Johnstone, Part One Condition:
The Legend of Sigurd and GudrunJRR TOLKIEN NUMBER 254 of 500 Limited Copies1st Edition 2009 Published by Harper CollinsHand Signed by Christopher TolkienMint Un-read ConditionThe only really minor negative of this book is, where the cover has been wide opened a stretched a bit of the manuscript page as can be seen in the photograph Deluxe edition limited to 500 copies worldwide, signed by Christopher Tolkien. Containing a facsimile page of original manuscript, it is hand-bound in goat-skin and features raised spine ribs; the pages are edged in gold. The book is in a matching leather tray case lined in real suede. In the Lay of the Völsungs is told the ancestry of the great hero Sigurd, the slayer of Fáfnir most celebrated of dragons, whose treasure he took for his own; of his awakening of the Valkyrie Brynhild who slept surrounded by a wall of fire, and of their betrothal; and of his coming to the court of the great princes who were named the Niflungs (or Nibelungs), with whom he entered into blood-brotherhood. In that court there sprang great love but also great hate, brought about by the power of the enchantress, mother of the Niflungs, skilled in the arts of magic, of shape-changing and potions of forgetfulness.In scenes of dramatic intensity, of confusion of identity, thwarted passion, jealousy and bitter strife, the tragedy of Sigurd and Brynhild, of Gunnar the Niflung and Gudrún his sister, mounts to its end in the murder of Sigurd at the hands of his blood-brothers, the suicide of Brynhild, and the despair of Gudrún. In the Lay of Gudrún her fate after the death of Sigurd is told, her marriage against her will to the mighty Atli, ruler of the Huns (the Attila of history), his murder of her brothers the Niflung lords, and her hideous revenge.I am offering international postage, as this is obviously an outstanding and valuable book, due to the increased insurance on the item the postage cost is very high as I wish to protect both buyer and seller.The amount quoted is if the book sold for £500, so please note worldwide postage could be more or less than that depending on the final price.
Submitted by: Huan68
Jump to Last