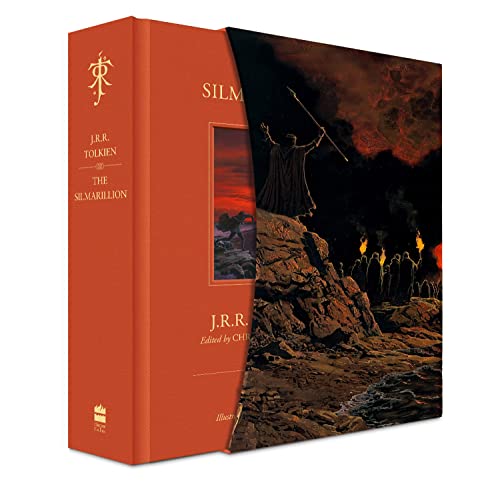 The Silmarillion
$103.34
TolkienGuide is an Amazon.com affiliate

541057
Mr. Underhill replied
1 hour ago
The Silmarillion Illustrated by Tolkien

Jan 28, 2010
2010/1/28 6:09:41 (GMT) Greenwich Mean Time, London, Dublin, Lisbon, Casablanca, Monrovia
Mark send along these new tidbits available from Mark Faith Books - contact him directly for more details if you are interested. Looks like some great artwork from Rodney Matthews, one of the best copies of Barbara Remington's "Middle-earth Mural" and a very early proof copy (third impression of the first edition) of The Fellowship of the Ring. Great stuff, Mark! Note that some of these are not listed yet on his website, so contact him directly for more information.

Jan 28, 2010
2010/1/28 22:19:26 (GMT) Greenwich Mean Time, London, Dublin, Lisbon, Casablanca, Monrovia
How can a proof copy be a third impression of the first edition? As far as I undertand the matter, proof copies are, by definition, pre-publication copies — that is, prior to even the *first* impression. The third impression would just have been a reprint of the first; I can't see there being any need for a proof copy of it. There *would* have been proofs, I imagine, of the second edition (1966), since the text was markedly changed. Can you clarify exactly what sort of copy this is? Thanks! :)
Share

It is unbound sheets with pencil corrections (from second to third impression), before it went to the printer. Hammond pp. 97-98 calls out that the typesetting from the second impression was undesirably destroyed before plates were made - "eleven corrections submitted for the third impression of FR (January 1955, not seen)". Could be an important copy! I have let Findegil know if he doesn't already. Plates were used from the fourth impression on according to Wayne.
Share

Feb 4, 2010
2010/2/4 3:09:52 (GMT) Greenwich Mean Time, London, Dublin, Lisbon, Casablanca, Monrovia
It was the typesetting for the *first* impression that was destroyed. The printer was supposed to leave this standing for a possible second impression, and after that to make moulds for plates which would be used for later impressions rather than the original type. When the printer got an order for a second impression, he reset the type without Tolkien's or Allen & Unwin's knowledge, introducing many errors while continuing others. Presumably a proof was taken of the third impression to verify that the eleven corrections submitted for it were made.
Share