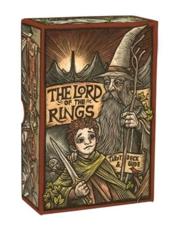 The Lord of the Rings Tarot Deck and Guide
$24.08
TolkienGuide is a Blackwell's affiliate

2019/2/17 0:00:16 (GMT) Greenwich Mean Time, London, Dublin, Lisbon, Casablanca, Monrovia
Amazon just started a teaser promotional push for the upcoming Prime Video series they are working on. See LOTR On Prime Facebook Page and LOTR on Prime Twitter Account. One of the first teasers that they gave was a map of Middle-earth, which has started a lot of discussion online. I want to focus this post on one small portion of that map: the compass rose: 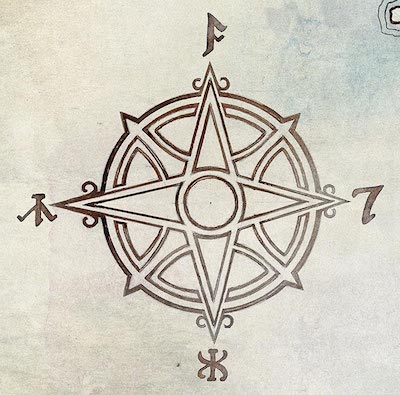 Just looking at that compass, it doesn't seem right. The Cirth runes they are using make no sense, unless we track them back to Karen Wynn Fonstad, author of The Atlas of Middle-earth. 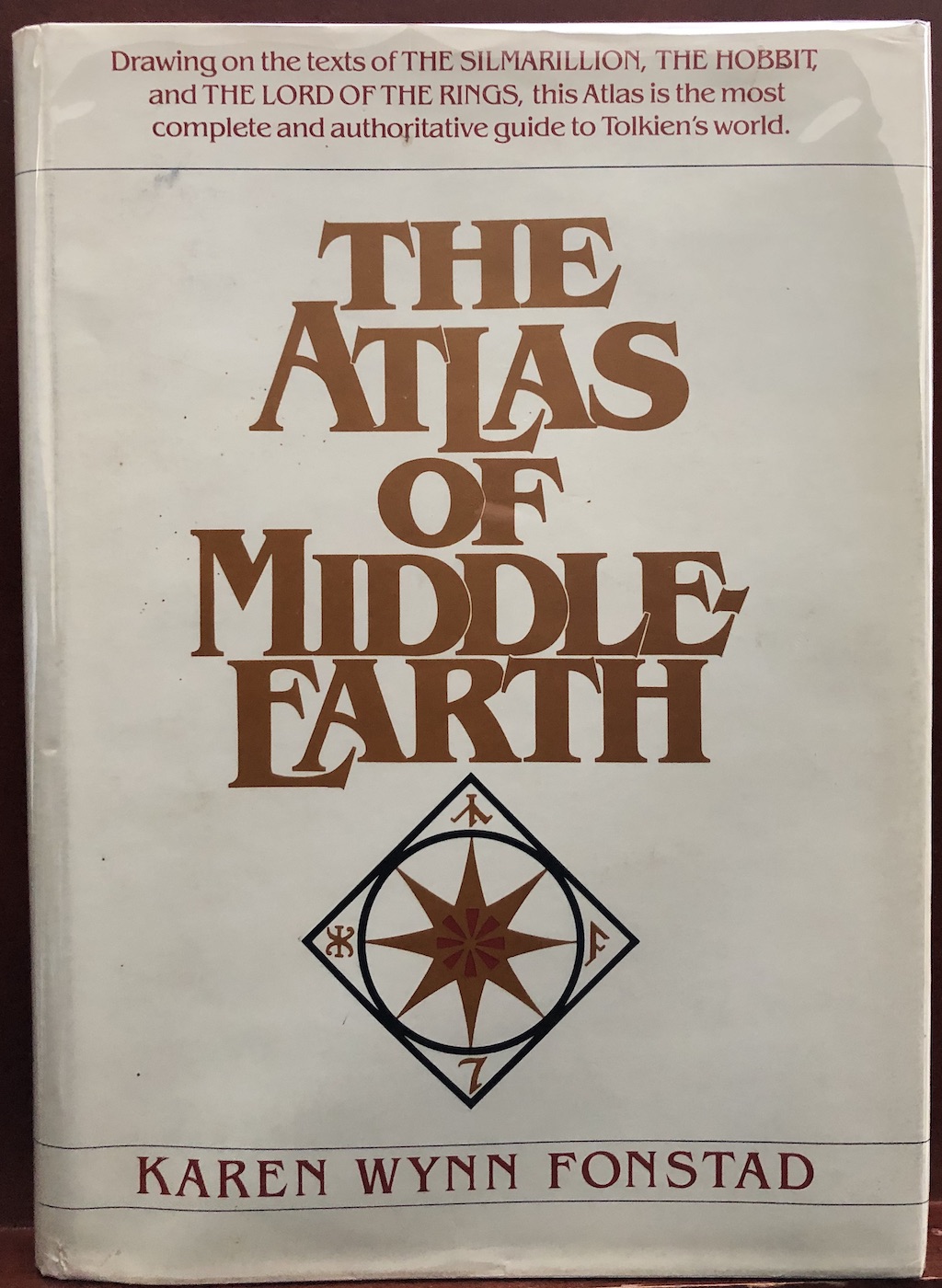 If you look at Fonstad's design for the first edition hardcover, you will see the same runes but in a different orientation. Fonstad was using Appendix E from The Lord of the Rings, which states the following (up until 2005)

The quote above is in the section discussing the tengwar writing system, where each character is given a numeric position in the chart. 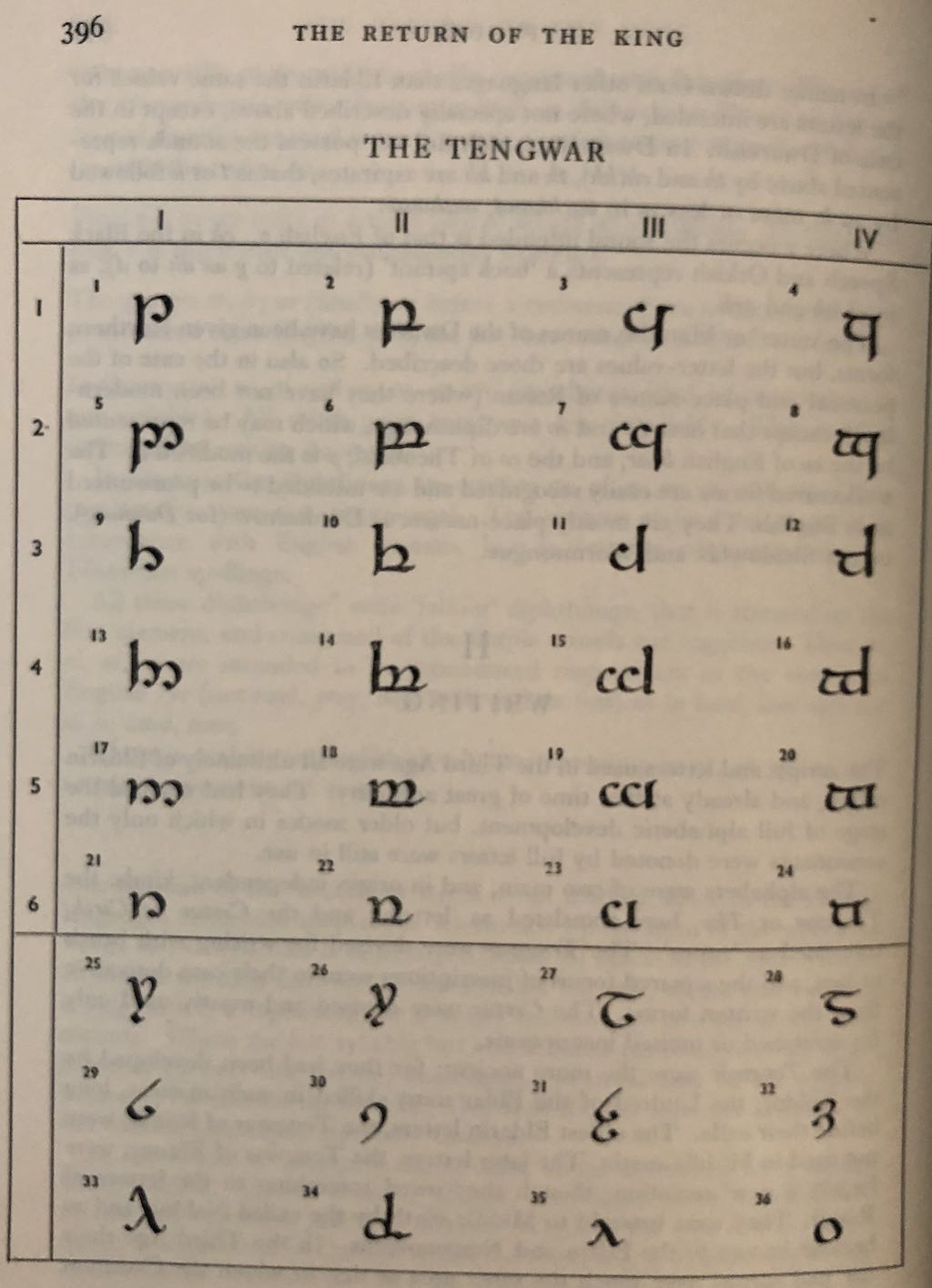 The next section of Appendix E then goes on to discuss the Cirth writing system with the runes also laid out in a table with numeric entries, and Fonstad mistakenly used Tolkien's numbers above to pick the runes for her compass. Also, Fonstad put "West" at the top of the compass on this first edition cover. 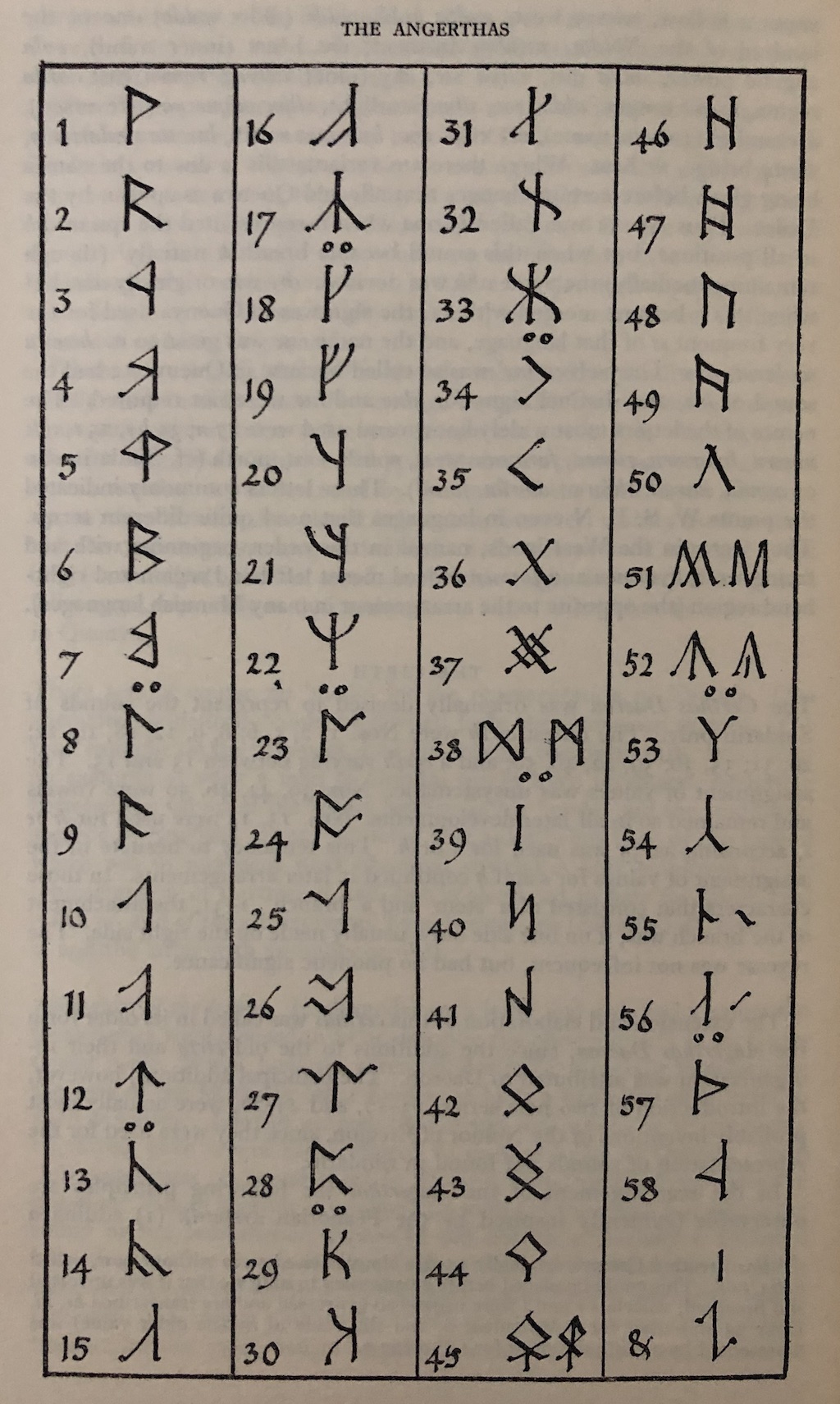 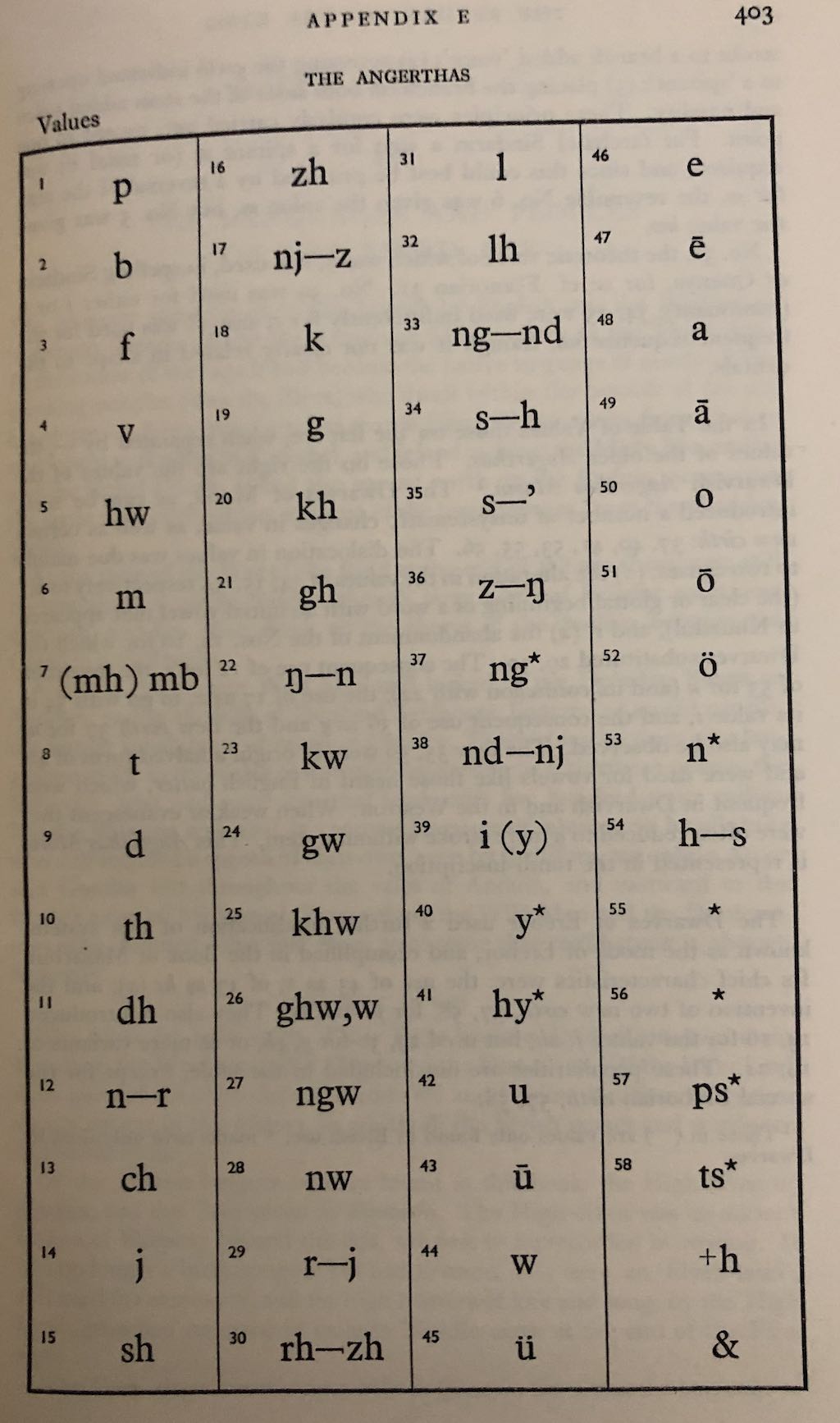 Since she had no idea of the mistake in that side note, Fonstad took the tengwar numbers given by Tolkien, and used those to put the runes on her book cover, with the following note on the copyright page. 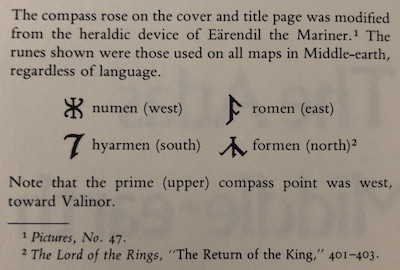 Thankfully (partially) the alignment of names and numbers was fixed in the revised edition of Fonstad's Atlas on the cover and copyright page (but not on the title page!) 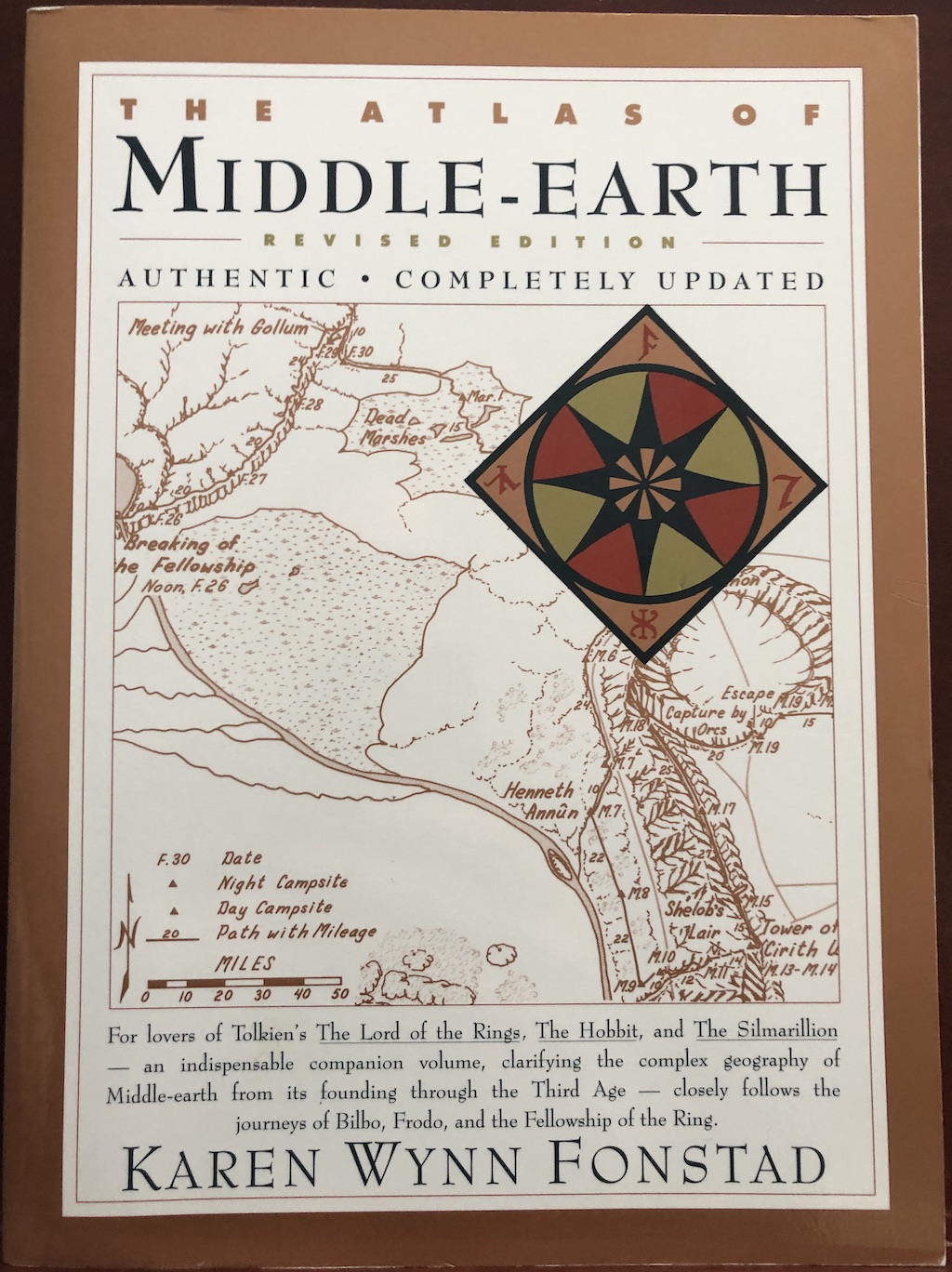 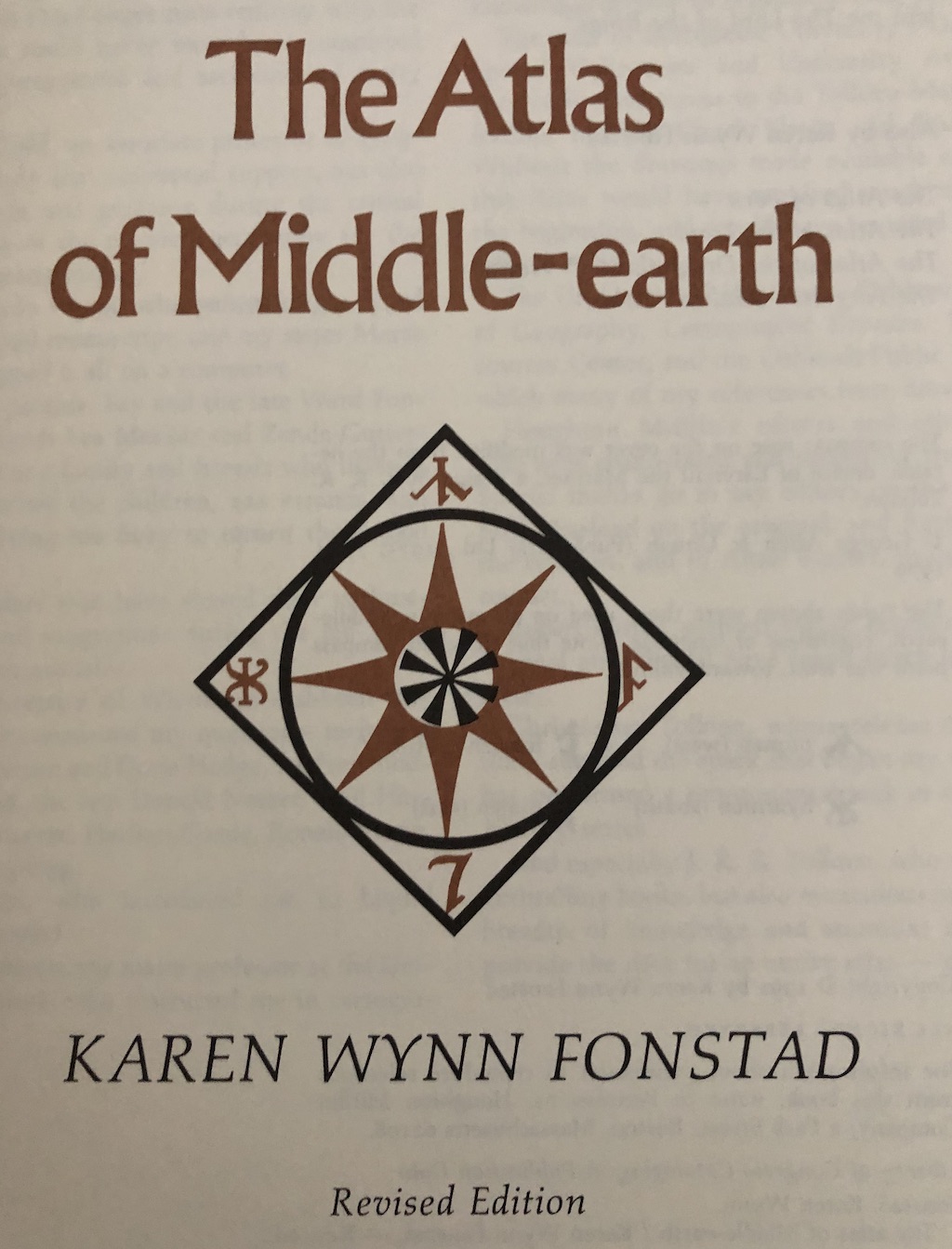 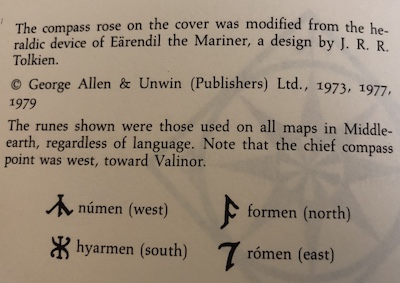 It seems that no-one noticed that she was using the tengwar indices to look up cirth runes, however.

The sounds for the cirth runes she has selected (based on these mistaken indices) equates to:


As you can see, nonsense.

These mistaken cirth runes persist into John Howe's map of Numenor if you look carefully at the four corners of the diamond (it is easier to see on his own website image, here). 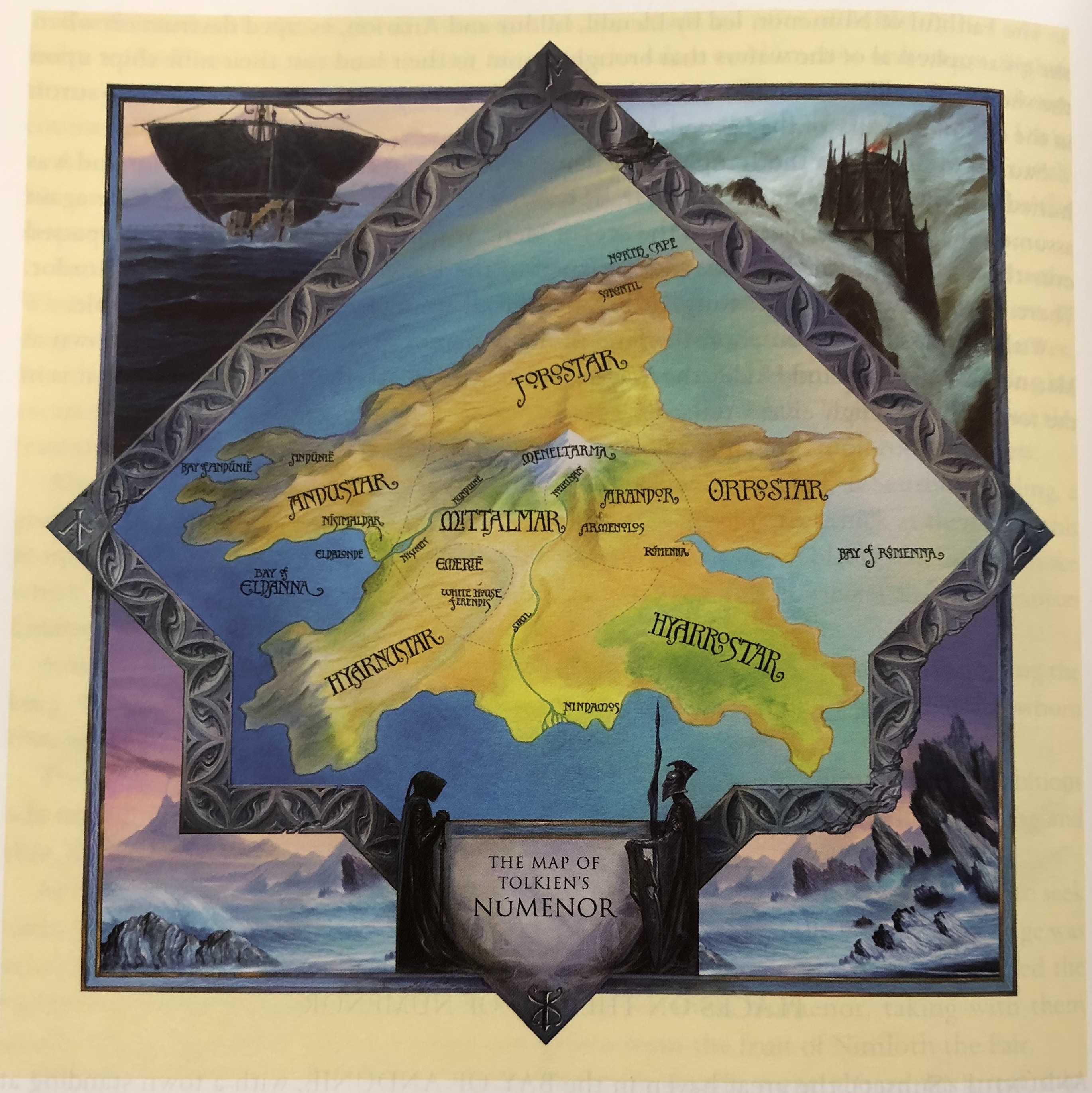 And then to the Amazon Prime map, shown here again:

Maybe after all these years, Fonstad's mistake can be corrected by someone at Amazon!

Did a very quick mockup of what the Compass Rose should be, let me know if it is not right. 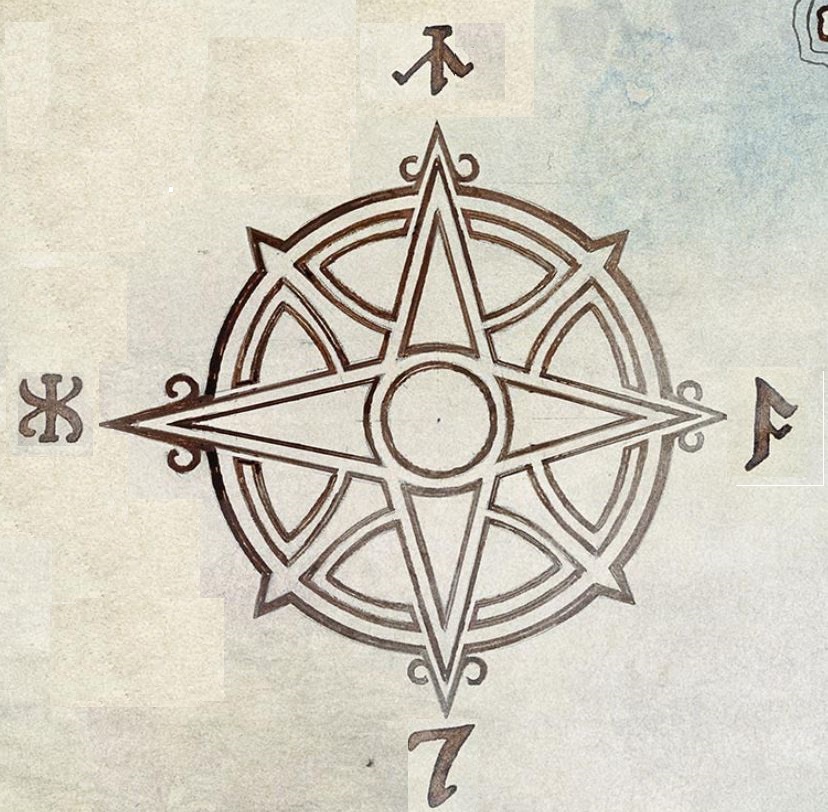 2019/2/18 18:19:55 (GMT) Greenwich Mean Time, London, Dublin, Lisbon, Casablanca, Monrovia
Here is what I feel would be correct based on Appendix E (mostly) and as much reading up as I could do this morning. Comments welcome.

Feb 18, 2019
2019/2/18 18:21:45 (GMT) Greenwich Mean Time, London, Dublin, Lisbon, Casablanca, Monrovia
Also of note - the Amazon map (and others) correctly have North to the top of the map, geographically speaking, but then have West as the primary compass point (slightly emphasized) as Tolkien wanted.
Share

Feb 18, 2019
2019/2/18 20:53:18 (GMT) Greenwich Mean Time, London, Dublin, Lisbon, Casablanca, Monrovia
After further thought, and running this past an expert or two, I am firmly of the opinion that Tolkien wanted the tengwar letters on the compass rose. He says in Appendix E in the section discussing tengwar:

From this it seems clear that usage among all races (dwarves, elves, human) was commonly using the tengwar letters.
Share 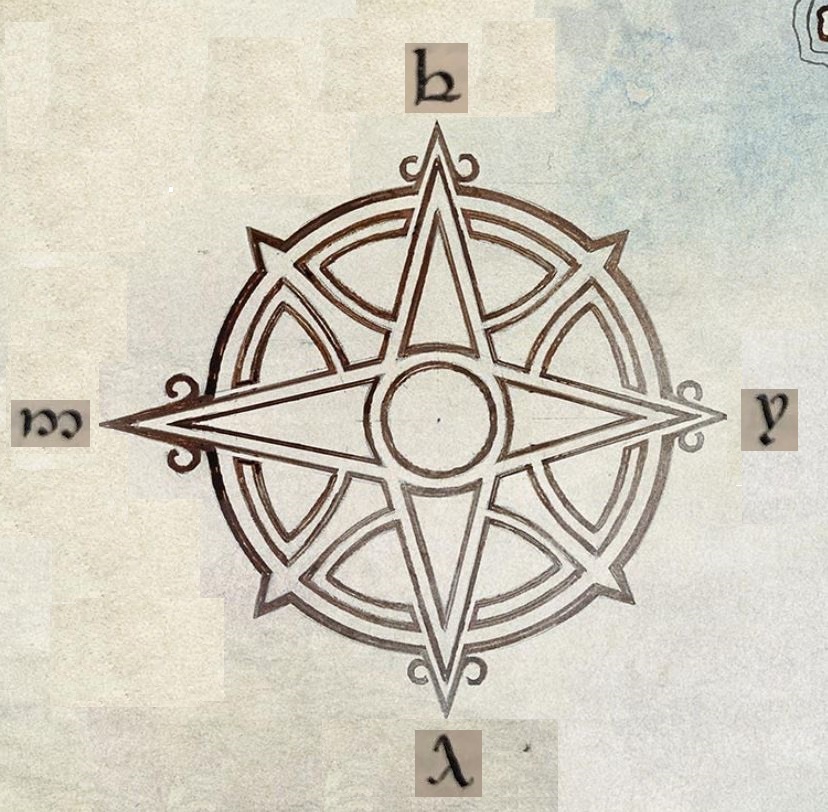 Feb 19, 2019
2019/2/19 16:39:36 (GMT) Greenwich Mean Time, London, Dublin, Lisbon, Casablanca, Monrovia
Further clarifications... at this point I think the above needs a complete rewrite to pull all the arguments and background together more coherently rather than stream-of-conciousness.

I think Tolkien meant to use tengwar given the following quote in appendix E (referring to tengwar letters):

I read that as saying even other races and languages used tengwar compass rose markings on their maps. But it does qualify that statement with "commonly," so this doesn’t have to be the only solution.

With the fluid nature of cirth rune sound values changing over the years (and what language the map maker spoke needing to be taken into account) it is quite the conundrum trying to choose the right runes. Choosing a particular set of runes not only indicates what time-frame the mapmaker lived in, it probably indicates what race they were as well. Also, there is no reason for the mapmaker to use the runes for Quenya sounds if they spoke the common tongue (for example), so finding the right cirth rune to equate to the Quenya word for the tengwar letter that Tolkien defined doesn't logically follow unless the mapmaker spoke and wrote in Quenya.

One could legitimately go with The Hobbit Anglo Saxon runes as well in Amazon’s case as the rest of the "Lord of the Rings on Prime" map has been translated into English, so using the AS runes (for the English N,E,W,S) would correctly follow another of Tolkien’s published systems if that was desired.

I thing tengwar preserves the feel and "otherworldly" nature of the marketing campaign best, but that’s just personal opinion. I think all of these solutions will involve opinion, as they all have pros and cons. All I know is that Fonstad’s creation was based on a simple and hard-to-spot transcription error, and does not convey anything meaningful once one understands the mistake. It was subtle, no-one that I am aware of spotted it for 38 years!
Share