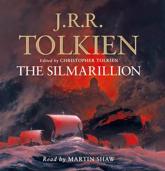 The Silmarillion Gift Set
$20.23
TolkienGuide is a Blackwell's affiliate

123
AndyBirdUK posted
Yesterday
The Lord of the Rings: The Rings of Power (Season One: Amazon Original Series Soundtrack)

Note for new collectors: The first 8 Volumes had large print runs and still sometimes found individually, it is the last three volumes 9,10,11,12 from Harper Collins which are the most rare because of small initial print runs and generally can only be found in a set like this.

What?! This is exactly the opposite of reality. People selling sets/runs often don't have the last volumes. They are available individually frequently. And prices have been falling, as has been widely discussed here.

If any run of books is ever not going to be worth what you paid to assemble it - it's a HoME set!
Share

The problem here is this incredibly short-term view of acquisition. What is the problem waiting for a better/cheaper copy to surface at a later date? I just take no pleasure at all in overspending on books; the fun is in the chase for most copies, other than the truley scarce/rare. Of course, there is always the fear that if you don't buy now it'll be even more expensive at some future point; but that is unlikely to ever be true for run of the mill HC junk. These books are kicking around in the (often tens of) thousands. Why would they just disappear?

A perfect (old) example is The Silmarillion. Yes, there are more desirable variants & there is also condition to consider. But 1977 copies are ten-a-penny. There are literally dozens of 1977 copies coming to the market every day. There were hundreds of thousands of these printed. So why on earth are people bidding against each other on 7-day auctions with bidding in the £50+ range? This is like going to the garage and buying petrol at 5-10 times the normal price, just because. That's totally dumb. And lazy.

Unlike Stu, I actually do have the confidence that I could shift most of my collectable copies for the price I paid. With inflation, is that a loss? Probably, but they're not worthless. And, of course, they mean more to me than any monetary value; since I derive great pleaasure in spending my spare time studying & understanding printing, publishing, bookbinding, etc. In this respect, it's like any other hobby. It costs money, but what hobby doesn't?

However, spending £100 a pop for this & that 1990's HC Hb etc. Naw, that's not value for money for me. Neither as a hobby or as book collecting. I honestly think that's quite careless. But if you have that kind of money to throw around, batter on...

I should clarify that when I say "Personally I always assume anything I add to my collection will have no future value", I really mean that I don't factor the books into the value of my assets because they could be worth something or nothing at some future point, and I'm not likely/intending to sell them anyway. Unless there is a future plan to sell, they aren't worth anything (in my lifetime) other than the pleasure they provide. There are a handful of exclusions to this, like duplicate CoHs where I only bought them for future speculation, but they are the tiny minority.
Share

If any run of books is ever not going to be worth what you paid to assemble it - it's a HoME set!

You aren't wrong. The idea of a set of HoME being worth £6995 is absurd and I have no problem calling that listing predatory (as well as factually incorrect). There is simply no way you can get above £1000 individually even if you *really* were trying, given other than the last two you aren't going to be paying more than £50 a pop for fine copies.

If there was a single seller responsible for the bulk of self-serving misinformation, I'd consider it to be that one.
Share

At least they're clear in the item description as to what they are selling. That's something, I guess...

Yeah, I saw that picture in my ebay browsing today and happily clicked through to see more. Putting 1950s facsimile dustjackets on books from circa 2000 just strikes me as plain silly (the copyright pages mention the renewed copyright in 1993 and then these are higher than 60th printings...). Just buy facsimile jackets direct and save a lot of money.
Share