2023/1/7 18:47:58 (GMT) Greenwich Mean Time, London, Dublin, Lisbon, Casablanca, Monrovia
“I did not mean the suggested revision to be printed off; but it seems to have come out pretty well in the wash.” JRR Tolkien 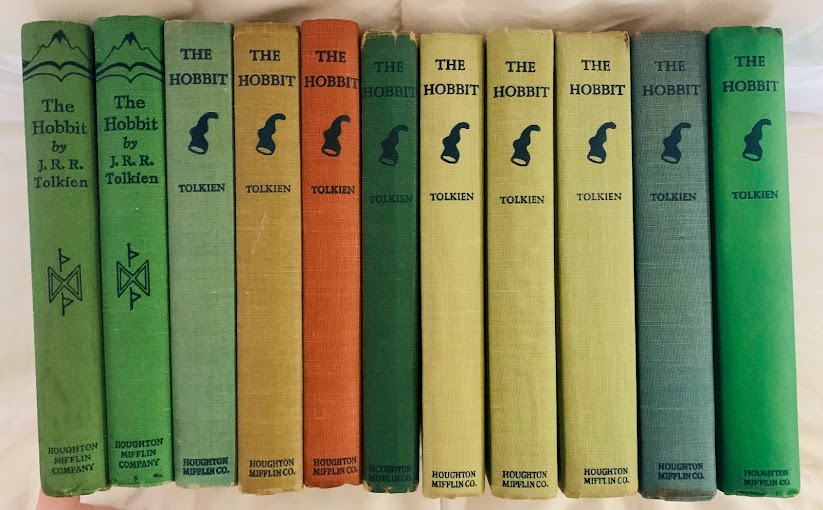 As we all know, Tolkien began work on The Lord of the Rings in the years after The Hobbit's publication. As the story evolved, Tolkien realized he needed to change how Bilbo and Gollum interacted in The Hobbit’s 1st Edition to suit the plot of The Lord of the Rings. He also wrote a new version of the introductory note to explain an apparent discrepancy between the map saying that Thrain had been king under the mountain despite Thorin's father Thrain never having held that title. This was explained as the map referring to a distant ancestor, Thrain I. However, this introduced contradictions with the text, such as statements that Erebor had been founded in the time of Thorin's grandfather, thus precluding an ancient Thrain I having ruled there, which were eventually addressed with changes for the third edition.

“The Hobbit: I return the proofs herewith. They did not require much correction, but did need some consideration. The thing took me much by surprise. It is now a long while since I sent in the proposed alteration of Chapter V, and tentatively suggested the slight remodeling of the original Hobbit. I was then still engaged in trying to fit on the sequel, which would have been a simpler task with the alteration, besides saving most of a chapter in that over-long work. However, I never heard any more about it at all; and I assumed that alteration of the original book was ruled out. The sequel now depends on the earlier version; and if the revision is really published, there must follow some considerable rewriting of the sequel.” (Letter #128)

Allen & Unwin prepared a new edition of The Hobbit for release in 1951, and Houghton Mifflin followed suit. 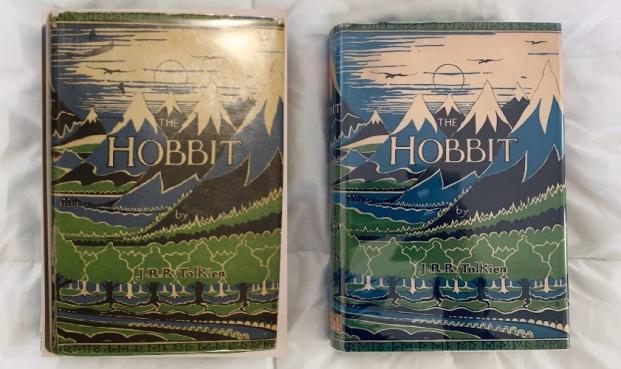 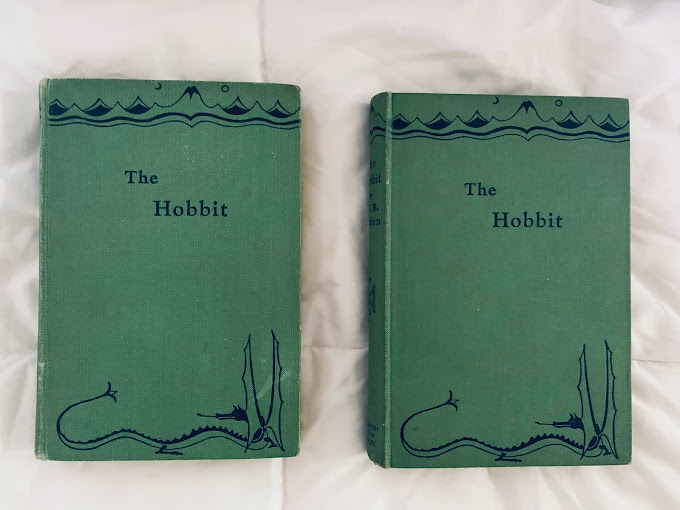 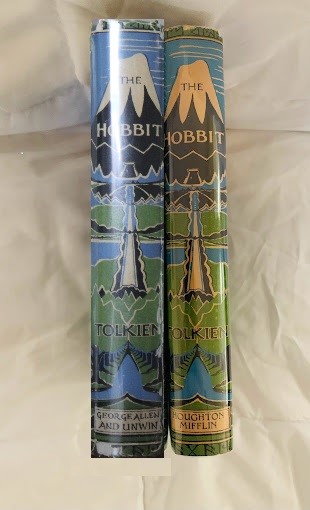 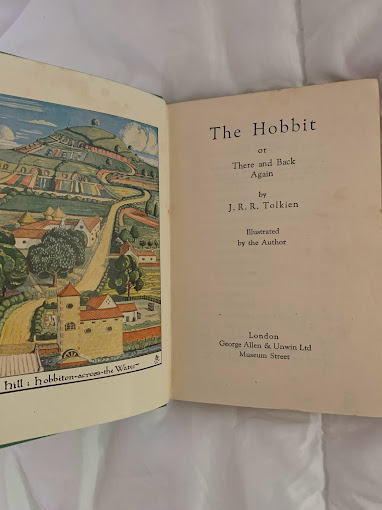 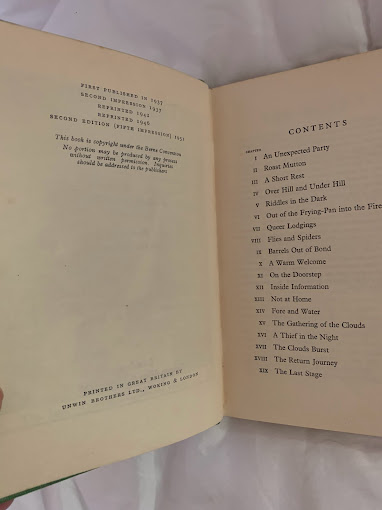 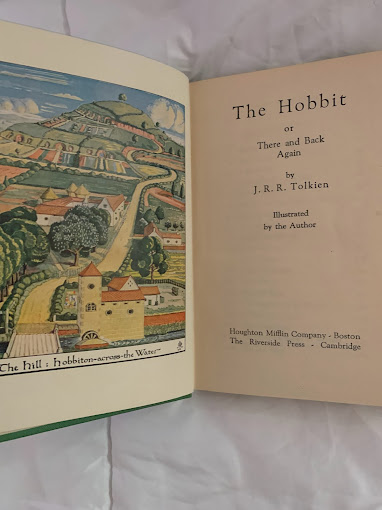 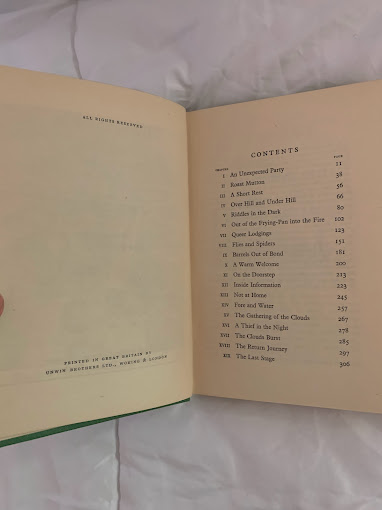 These American impressions from the 5th through the 14th were bound from sheets printed in Great Britain, corresponding to the same George Allen & Unwin printings of the second edition. Unlike the A&U printings, the American copies of the second edition have a variety of different copyright pages, making them very difficult to identify in isolation. Some state the full printing history, while some only say printed in Great Britain. There is a long list of "points" that have been developed by comparing unknown American printings to known British printings. Steve Frisby, for example, untangled the 9th printing, which differs from its Allen & Unwin counterpart on page 315. Any additional points on volumes feel free to ask here, in response to the article. 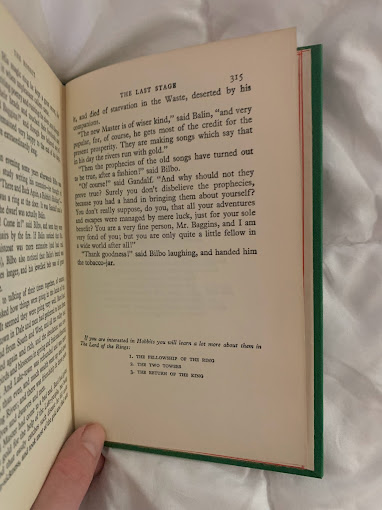 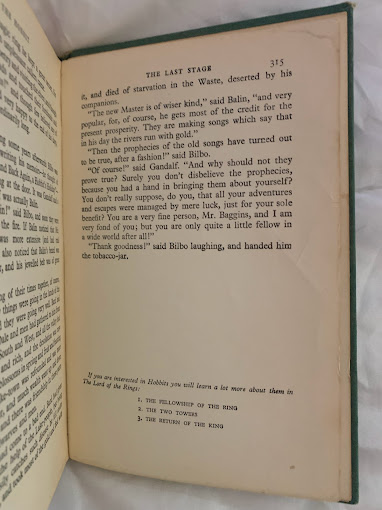 (This divergence likely resulted from the cancel title pages A&U was obliged to supply when they converted 9th printing sheets intended for British domestic use into Houghton Mifflin sets.) Information regarding the print run sizes of the Second American Edition of the Hobbit is held by the University of Reading Special Collections Service.

The American second editions from the 5th through 14th printings measure 12.7 x 19.0 cm, contain 315 numbered pages, and have end-paper maps printed in black, white, and red. The frontispiece is printed in color, but the remaining color plates of the first edition were eliminated. With the exception of the 5th printing, the cover design is similar to the American first edition, only smaller, differently colored, and lacking the bowing hobbit emblem on the front board. 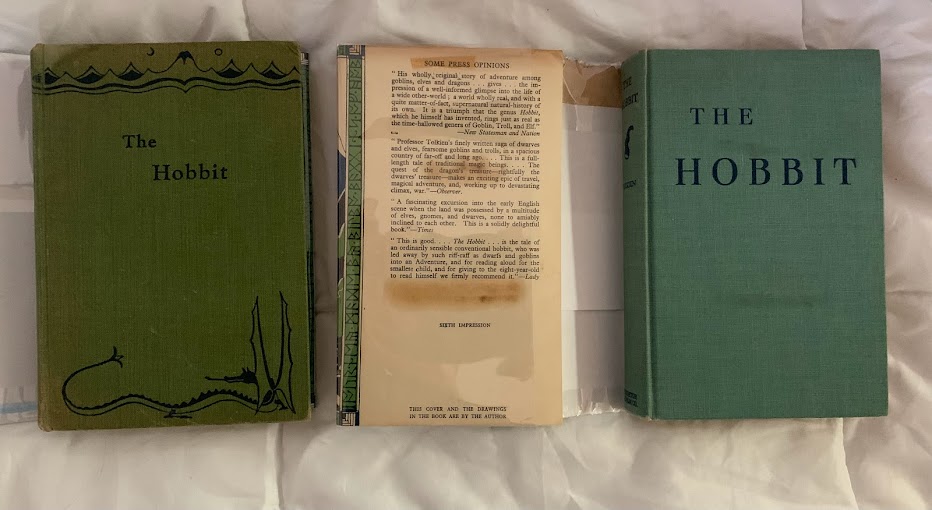 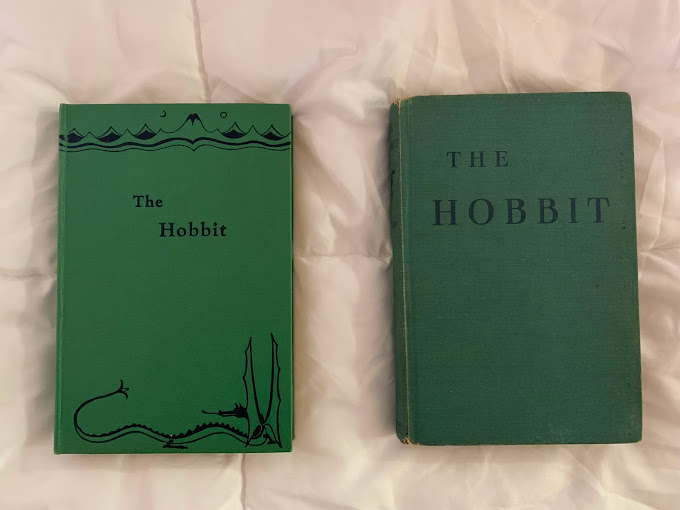 Houghton Mifflin issued two distinct variants corresponding to the British 5th printing.
The earlier variant (5a) issued in 1951, is constructed in a similar style to the subsequent American printings of the second edition. That is, the title page states "Houghton Mifflin Company - Boston, The Riverside Press - Cambridge", and the book lacks the printing history and colophon entirely. Even so, the sheets for the text body came from A&U and thus are identical to the British 5th printing.
The later variant (5b) issued in 1953, is identical to the British 5th printing in every regard except for the "Houghton Mifflin" notation at the base of the spine. In particular, the title page states "London, George Allen & Unwin Ltd, Museum Street"; the colophon shows the A&U St. George and the Dragon insignia and the addresses of the publishers offices worldwide; and the title page verso shows the full printing history. 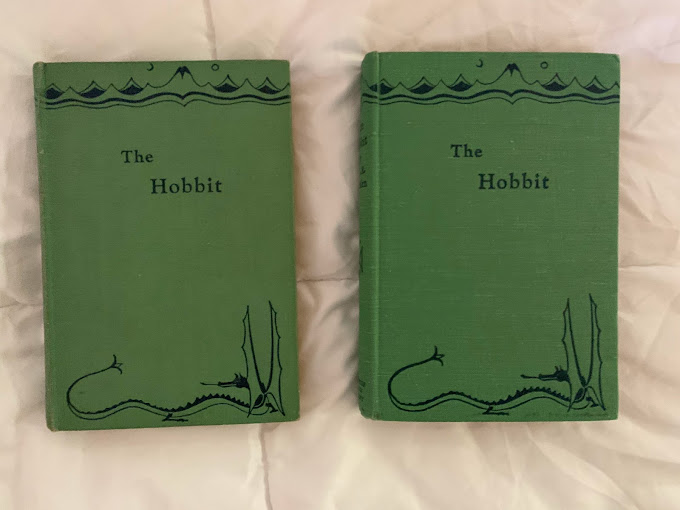 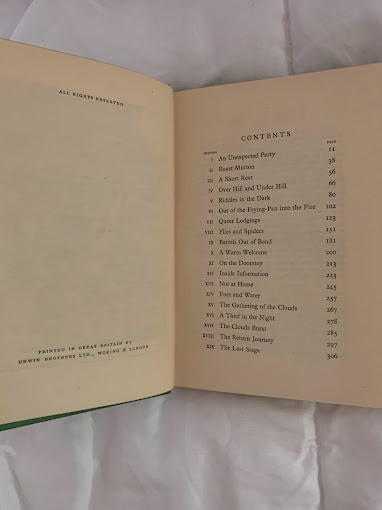 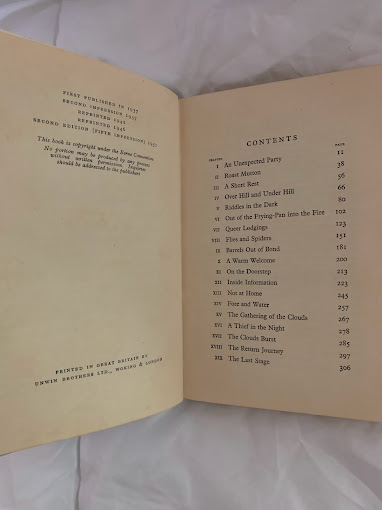 American second edition dust-jackets are nearly identical to British, except that Houghton Mifflin is printed at the bottom of the spine instead of George Allen Unwin. The design is basically unchanged from the original 1937 edition of The Hobbit. Dust-jackets declare the impression and often may be used to ascertain at least the approximate printing of the book. Sometimes, however, the publisher put dust-jackets from one printing onto books of a neighboring printing. Also lost, damaged or discarded dust-jackets are sometimes replaced with ones acquired elsewhere. Hence the jacket cannot be considered definitive.
The runes bordering the dust-jacket read: ‘THE HOBBIT OR THERE AND BACK AGAIN BEING THE RECORD OF A YEARS JOURNEY MADE BY BILBO BAGGINS OF HOBBITON COMPILED FROM HIS MEMOIRS BY J.R.R. TOLKIEN AND PUBLISHED BY GEORGE ALLEN AND UNWIN LTD’. The incorrect publisher’s name was corrected to ‘HOUGHTON MIFFLIN AND CO‘ for the 19th Printing. 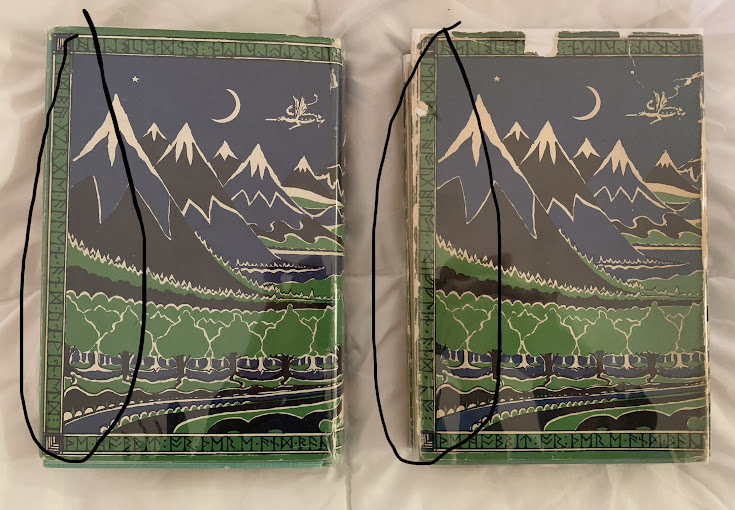 Houghton Mifflin enlarged the book to 14.0 x 21.0 cm commencing with the 17th printing (prints 15&16 don't exist), probably in 1964. At that point they abandoned importing sheets from George Allen and Unwin. Parallel to the single British 15th printing, Houghton Mifflin reprinted The Hobbit nine times from their own plates until the advent of the third edition. They dropped the red color from the maps and removed the color frontispiece so that no color remained in the book's interior. The 17th and remaining printings of the second edition are bound in light green with lettering in dark blue. Beginning with the 18th impression the volumes state the printing number on the reverse of the title page. The 23rd impression is the final impression of the second edition.
The 24th printing belongs to the third edition: it replaces the second edition's description of the revised edition with a description of runes; the type is completely reset; and the page count increases to 317.
While the Allen and Unwin sheets appear to have been printed from Linotype plates, clues suggest that Houghton Mifflin opted to filmset the later printings of the second edition. They did not phototypeset new plates; rather they seem to have photographed the 14th impression. While the sheets are larger, the type block itself is identical. 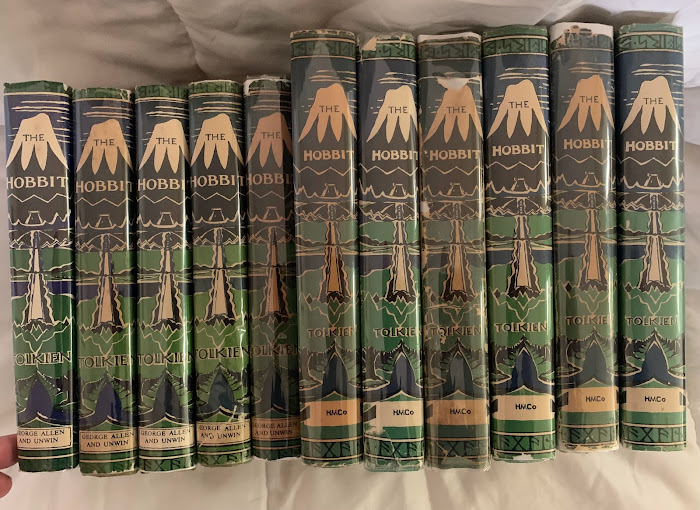 I used it just now to identify this as the 13th printing. Is this your personal collection? The dust jackets are absolutely beautiful. Thank you for sharing.
Share

Is this your personal collection? The dust jackets are absolutely beautiful. Thank you for sharing.

Yes, all books pictured are from my collection.
Share

Jan 9
2023/1/9 6:57:29 (GMT) Greenwich Mean Time, London, Dublin, Lisbon, Casablanca, Monrovia
Was asked a question on Twitter about the dwarf's cap illustration on the bindings of some of the US Hobbits.

They asked if it was by Tolkien, but as it appeared on the first printing, I think it must be by a HmCo illustrator.

The Hammond & Anderson Bibliography just states it is a dwarf's cap.
Share

Was asked a question on Twitter about the dwarf's cap illustration on the bindings of some of the US Hobbits.

They asked if it was by Tolkien, but as it appeared on the first printing, I think it must be by a HmCo illustrator.

The Hammond & Anderson Bibliography just states it is a dwarf's cap.

It's not by Tolkien, all indications are that it was a staff artist at HMCO, whose name has been lost.
Share

367
onthetrail replied
Yesterday
Typo in Ballantine Fellowship of the Ring