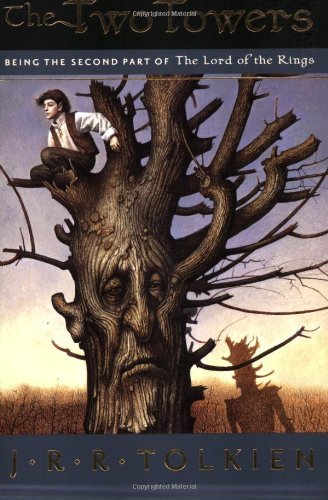 The Two Towers: The Lord of the Rings--Part Two
£21.03
TolkienGuide is an Amazon.co.uk affiliate

Help with the Name of an Alan Lee work

12
Taivo posted
15 minutes ago
Post pictures of your Collection

915
Urulókë replied
16 hours ago
The most brilliant bookshops in the world: our readers’ picks

2010/1/9 19:33:17 (GMT) Greenwich Mean Time, London, Dublin, Lisbon, Casablanca, Monrovia
I am a great fan of Podcasts and thought it would be useful to list the main Tolkien Podcasts that are currently available. I am not including Lord of the Rings Online Podcasts.

I think most people on this site will know what a podcast is, but just in case it is an audio or video file that you can download to your computer or portable device and listen to. Most podcasts can be subscribed to using an application like iTunes and new episodes are automatically downloaded when they are published.

This Podcast has some interesting interviews mainly about the films but I have problems with the audio quality and have recently stopped listening. I am sure that the audio issues will be resolved and then I'll listen again.

Middle-earth Minutes is up to episode 7 and I was not a huge fan when it first started, as the presenter (Michael Kaiser) just read out news stories. That all changed in the last couple of episodes as Beren is now a regular guest on the show. This forum got a mention on the last episode as well.

I can only find this through iTunes in the iTunes University (do a search for Tolkien at Oxford in iTunes).

Two episodes so far on Tolkien and Languages and Tolkien and the Oxford English Dictionary.

Michael Martinez and Hawke discuss news stories on this podcast. The episodes are often recorded a long time before they are released so a lot of the news events are often in the past. They also have not yet done a RSS feed for the episodes so you cannot subscribe using iTunes or a similar podcatcher and automatically get new episodes.

I have left the best Tolkien podcast to last. It has been quite quiet recently as Cory Olsen has not had time to devote to the extensive research which goes into each of his podcasts. The audio quality is also excellent on this podcast and at the moment if you were to listen to just one Tolkien podcast then I recommend this one.

Finally, I just thought that I would also mention my favourite podcast which is not Tolkien related.

I am also very interested in history and a superb podcast has been produced by Mike Duncan called The History of Rome. The amount of research put in to each episode is staggering and he has produced 78 episodes so far.

Have I missed any other Tolkien podcasts of note? or can anyone else recommend any other really good podcasts.
Share

Jan 11, 2010
2010/1/11 11:31:26 (GMT) Greenwich Mean Time, London, Dublin, Lisbon, Casablanca, Monrovia
I think most people on this site will know what a podcast is, but just in case it is an audio or video file that you can download to your computer or portable device and listen to -Trotter

Portable device? Not sure I have one of these...

Thanks for information Trotter. Had been meaning to invest some time listening to some of the stuff out there for a while now. Think I'll start with The History of Rome though...

Feb 4, 2010
2010/2/4 18:48:35 (GMT) Greenwich Mean Time, London, Dublin, Lisbon, Casablanca, Monrovia
Also thanks from me for posting this list! I have been following the Tolkien Professor one (who by the way is now one of the staff at the Festival in the Shire Journal,) but was not aware of all of the others.
Share

Feb 4, 2010
2010/2/4 18:56:37 (GMT) Greenwich Mean Time, London, Dublin, Lisbon, Casablanca, Monrovia
In case people don't know this, Cory Olsen (The Tolkien Professor) is making available all his lectures to students as a podcast. It's nice that this is possible today and I recommend listening.
Share

Talking Tolkien: The influences of Medieval Literature on the Fiction of J. R. R. Tolkien

Stuart Lee and Elizabeth Solopova discuss the influences of medieval literature on the fiction of J. R. R. Tolkien.

The Hobbit at the Bodleian: World Book Day

Judith Priestman, curator of the Bodleian library, discusses the World Book Day 2010 exhibition, where a selection of J.R.R. Tolkien's original artwork which was used to illustrate The Hobbit, was on display to the public.

This one is with Professor Iain Stevenson on the history of 20th Century British Publishing Houses and has some interesting comments on George Allen, G&AU and Sir Stanley Unwin.

Iain Stevenson has worked with Longman, Macmillan, Pinter, Leicester University Press, Wiley, and The Stationery Office. In 1986 he founded the environmental publisher Belhaven Press. He created the award winning MA in Publishing Studies at City University London and was a Professor in the Department of Journalism and Publishing there between 1999 and 2006. He is active on the governing and advisory board of the Publishers Association. Current research is centred upon the history of British publishing and the applications of new technology in publishing, especially e-books and alternatives to the printed monograph in academic and scholarly communication. We met recently to talk about his excellent new book, Book Makers: British Publishing in the Twentieth Century, published by British Library.

Caleb Woodbridge interviews Dr Carl Phelpstead, author of 'Tolkien and Wales: Language, Literature and Identity', recently published by the University of Wales Press. Tolkien once wrote: 'I love Wales - and especially the Welsh language'. In this episode, we discuss with Dr Phelpstead how Welsh influenced Tolkien's ideas about language and his fiction, especially The Hobbit and The Lord of the Rings. We also discuss Tolkien's place in the university today, and what the future might hold for the academic study of Tolkien. Dr Phelpstead is a Reader in English Literature at Cardiff University. His areas of research include Old Norse and Medieval English literature. Dr Phelpstead has published widely on Norse sagas and other medieval literature and has contributed to The J.R.R. Tolkien Encyclopaedia and Tolkien Studies. Length: 20 minutes