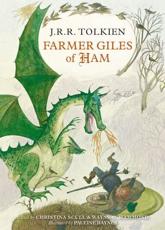 Farmer Giles of Ham, or, in the Vulgar Tongue, The Rise and Wonderful Adventures of Farmer Giles, Lord of Tame, Count of Worminghall and King of the Little Kingdom
$11.56
TolkienGuide is a Blackwell's affiliate 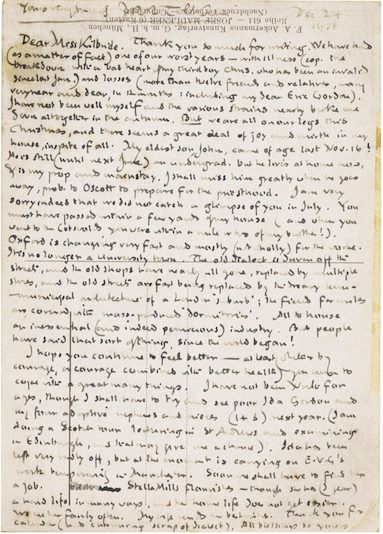 Thanks to Morgan for pointing this one out - Bonhams has a handwritten, signed postcard from 1938 (the auction entry originally said 1926 but has been corrected) up for auction. It is quite densely written and is a nice sampling of his handwriting. Lot 150

Autograph postcard signed ("JRR Tolkien"), to Miss [Katherine or Kitty] Kilbride, giving news of the travails suffered that year and of his family, and complaining abut the state of Oxford in the age of Morris Motors; the card reproducing in colours Josef Madlener's Heilige Familie (published in series of six by F.A. Ackermann), one page, closely written in a minute hand, minor creasing to corners and discoloration but overall in fine and attractive condition, 8vo, [Oxford] "Oxford is changing very fast and mostly (not wholly) for the worse. It is no longer a University town. The old dialect is driven off the streets, and the old shops are fast being replaced by the dreary semi-municipal architecture of a London suburb; the field for miles are covered with mass produced 'dormitories'. All to house an inessential (and indeed pernicious) industry [Morris Motors]. But people have done that sort of thing since the world began!" The recipient is K.M. (Katherine or Kitty) Kilbride, who had met Tolkien when studying in Oxford, it is believed at a summer school, and is thought to have been teacher living at Bradford. Her copy of the The Hobbit was sold at Sotheby's New York, 13 December 2002, lot 152, for $75,000.