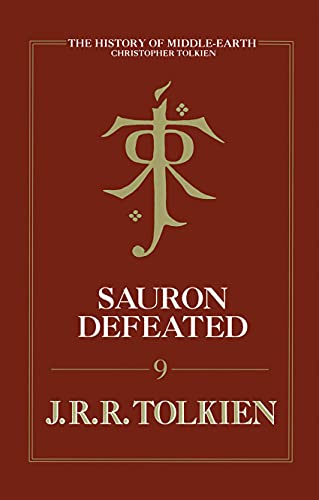 Sauron Defeated: The End of the Third Age: The History of the Lord of the Rings, part four (History of Middle-earth Book 9)
$9.99
TolkienGuide is an Amazon.com affiliate

Hi. Seems I can help clear up a lot of the mystery surrounding these posters.

And at the same time correct some inaccuracies in the descriptions on the Posters60.com website of the three posters of Gandalf, Gollum and Bilbo, which they describe as all being by Count Dominic Charles Peter Bon de Sousa Pernes. Of the series only Gandalf (and probably Shadowfax) are by de Sousa Pernes, I believe.

Four of the posters were published in Newcastle upon Tyne, England, by Jack Drury, a local entrepreneur and Tolkien enthusiast who was managing director of the Louise James model agency in the Cloth Market, a street just off the Bigg Market.

The first poster, Gollum, was imported from the US and had been designed some years earlier by, I presume, an American artist. It had been widely available for some time by mail order through adverts in magazines such as Sunday colour supplements, Private Eye etc. So the original design concept for the series was his (or indeed hers. Who knows?)… but not, as the Posters60s website states, de Sousa Pernes. (I have written to them to correct their mistakes.)

I think that Jack Drury distributed posters as one of his many business interests. I vaguely remember that he may have had connections with a music shop in the Handyside Arcade in Newcastle (but I could be completely wrong about that). He saw that there was a growing interest in Tolkien’s work, although it was still very niche at that time (late 60s/early 70s) in the UK. He decided to commission some more posters in a similar style, with matching borders, to make a set.

I can’t remember for certain whether he commissioned Gandalf or Bilbo first. They were the 2nd and 3rd in the series but which came first I don’t know… I have a feeling that it was Bilbo.

In 1969, I think it was, Jack decided to commission a local professional commercial artist (whose name I never knew) to produce the artwork. The drawbacks of using a professional who hadn’t read the stories emerged when the first version of the artwork came back showing Bilbo wearing the ring of invisibility!!! It had to be redone to show him carrying the ring instead. But with his flowing locks and psychedelic robes he was still not very hobbit-like.

The poster of Gandalf was commissioned by Jack Drury from de Pernes, who was a Tolkien fan, but Jack was disappointed by the standard of the drawing, particularly the very short, dwarf-like legs.

Then he decided to commission a poster of Shadowfax – the most famous horse from the saga – to appeal to the young female audience. I think this one was also commissioned from de Pernes. But rather than illustrate any scene from the stories he chose to show the horse cavorting in the waves on a storm-wracked beach with a strange hybrid chimera, half-horse, half-fish.

I knew Jack because I was working at an advertising agency that often employed models from his agency. We had talked about his posters and he knew that I was interested in becoming an illustrator. One of his favourite characters from the stories, although a rather minor one, was Treebeard, so in 1970 we made him the subject of the next poster. In retrospect I think I got rather too preoccupied with the ink & gesso technique that I used to create the texture of the bark etc. and made his face look rather too benign, not scary enough, and the setting too warm and sunny.

In the end I think the Drury posters were a commercial failure. I left Newcastle a couple of years later and lost touch with Jack and Louise. I don’t know for sure what happened but Allen & Unwin started to produce Lord of the Rings posters of their own (Pauline Baynes’ maps of Middle Earth etc) and it is possible that they may have stopped him from reprinting, distributing or producing any more.
Share

Dec 9, 2018
2018/12/9 17:28:02 (GMT) Greenwich Mean Time, London, Dublin, Lisbon, Casablanca, Monrovia
wow, thanks very much for that, Simon. As you may have gathered from the page linked to in your post, I have a full set of these posters including your Treebeard. It's very good to 'meet' you, and to hear your story.

Dec 10, 2018
2018/12/10 13:08:05 (GMT) Greenwich Mean Time, London, Dublin, Lisbon, Casablanca, Monrovia
Why aye, Stu, the Bigg Market! The tales we could swap aboot the Bigg Market on a Sarrada neet? Gerrin' paralytic on black'n'tans or a jorney-inta-space or three in the Half Moon or Balmbras then a vindaloo at the Koh-in-oor tharra'd paralyse yer teeast buds at 40 peeaces...

sigarb wrote:
Why aye, Stu, the Bigg Market! The tales we could swap aboot the Bigg Market on a Sarrada neet? Gerrin' paralytic on black'n'tans or a jorney-inta-space or three in the Half Moon or Balmbras then a vindaloo at the Koh-in-oor tharra'd paralyse yer teeast buds at 40 peeaces...

A vindaloo and a bottle of dog (although preferred Double Maxim from Sunderland, tbh) > Tolkien books :)
Share