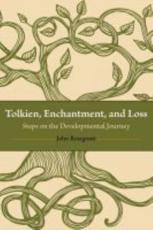 Tolkien, Enchantment, and Loss
$72.23
TolkienGuide is a Blackwell's affiliate

797449
Mr. Underhill replied
Yesterday
Philippa Boyens on The War of the Rohirrim

112438
Trotter replied
Yesterday
The Rings of Power Exclusive: Everything You Need to Know About Celebrimbor

In "The Oxford English School" Tolkien proposed improvements to the "lit" vs. "lang" divide in the Oxford syllabus. According to Scull & Hammond's Reader's Guide (p. 953 of the 2017 edition), Tolkien proposed to call the language/philology scheme (his own specialty) "A", and the literature scheme "B".

But everywhere else the A/B curriculum split is mentioned, the letters are the other way around. This is more significant than it may seem, because the A/B divide was the basis for a personal symbolism Tolkien held for many years equating "lit" or A with the oak tree (from OE ác) and his own "lang" or B with the birch (from OE beorc). Christopher Tolkien's notes on the subject in The Return of the Shadow have the letters this way around, as does commentary by Tom Shippey in The Road to Middle-earth, and poems from Songs for the Philologists playing on the oak/birch symbolism which Shippey reproduces in his appendix. Shippey, in fact, has based his entire allegorical reading of Smith of Wootton Major on the idea that A was literature and B was Tolkien's preferred language track.

Does anyone have the original essay, and can confirm which was which in 1930 when he wrote it? Thanks!
Share

2022/5/15 17:47:20 (GMT) Greenwich Mean Time, London, Dublin, Lisbon, Casablanca, Monrovia
If no one has a copy then you may want to email Catherine Mcilwaine at the Bodleian, as hopefully they have a copy.

If only you had been nearby recently, you could have popped in and asked her

Our quotation in the Companion and Guide is correct: Tolkien referred to 'language' as A, and to 'literature' as B. Could there be some confusion elsewhere because the schemes at Leeds in Tolkien's day were designated the other way around, i.e. A=literature, B=language? See Reader's Guide, pp. 666-7.

I suppose it must be because the poems from Songs for the Philologists were written while Tolkien was at Leeds, the A/B=oak/birch symbolism worked at the time. Tolkien must have chosen to swap them later on, for reasons that are lost (maybe something specific to Oxford?).
Share

As always, please visit our friends at Tolkien Collector’s Guide for information about rare or hard-to-find Tolkien materials like The Oxford English School.