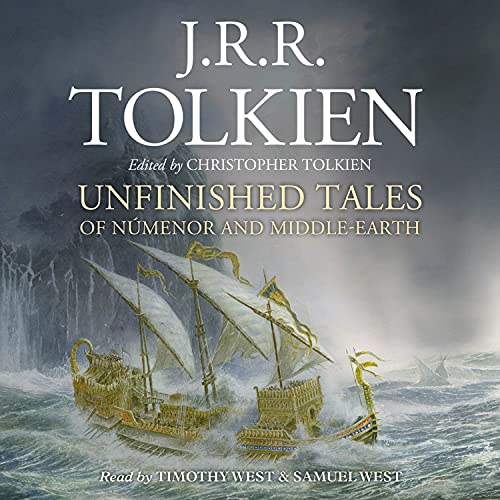 271438
Urulókë replied
Yesterday
Nielsen Streaming Top 10: ‘House of the Dragon’ and ‘The Rings of Power’ Face Off for the First Time

2022/9/10 6:12:11 (GMT) Greenwich Mean Time, London, Dublin, Lisbon, Casablanca, Monrovia
This thread contains spoilers for the Amazon TV Series The Rings of Power, it is advised that you watch the episode first before reading this thread.

Additionally please follow the rules of the site when posting in this thread. Any comments not following the site rules will be deleted and your account may be suspended by the moderators.

Sep 16
2022/9/16 18:18:58 (GMT) Greenwich Mean Time, London, Dublin, Lisbon, Casablanca, Monrovia
This episode felt better written and paced to me than prior ones. My favorite so far, as it finally has finished (I hope!) laying groundwork and introducing all of the characters we've seen from various promo posters etc. There was some good action (and some goofy video-game like stealthy sneaking from Theo), and some great chemistry between various characters - much less felt forced or clunky for me, this time. Elrond missing his father and talking with Durin was my favorite scene this episode, with the dream vision of the Great Wave some of the best special effects.

We are far away from Tolkien's writings on the Second Age, but for the most part the internal consistency of the TV show is holding together. They are still playing way too loose with geography and time passing for my taste, though. Have days passed since episode 3? Months? How is Celebrimbor's tower half built already? Does it really only take a few weeks (or "until Spring") to build such a massive project?

As a generic fantasy TV series, this is doing a good job holding my interest. My enjoyment rating is slowly creeping up, maybe a 9/10 for this episode. I'm not finding the time to pull apart each episode as comparing to Tolkien at this time, but others are doing a fantastic job of that (Tolkien Professor, Rings of Power Wrapup, Varking and team over on Reddit, some folks over at The One Ring dot net) so I will try to catch up someday.

In the meantime, enjoy some concept art from episode four!

Sep 16
2022/9/16 19:15:24 (GMT) Greenwich Mean Time, London, Dublin, Lisbon, Casablanca, Monrovia
I was a bit surprised that they show The Great Wave in this episode, as I expect a lot of viewers have no idea what happens to Númenor, as well as the Númenoreans.

I think this is probably the best episode so far, but that was really because it had no Hobbits in it.
Share

Sep 16
2022/9/16 19:52:09 (GMT) Greenwich Mean Time, London, Dublin, Lisbon, Casablanca, Monrovia
I agree with you both thy this is the best episode so far, though like Uruloke I have some misgivings with the time taht is passing. The structure, as noted, is going up awfully fast. The Egyptians were the great builders of the ancient world and it took more than 20 years to build the great pyramid with 100,000 men. Orthanc was built within a period of the SA between 3320 and 3430. But it was not built over a few months for sure (exact date range unknown). It just appears that the writers are putting an awful lot in a little time.

But, we know this is pretty far from Tolkien so I guess it's a case of letting stuff like that go, but the inner nerd struggles on stuff like that.
Share

Sep 16
2022/9/16 22:15:31 (GMT) Greenwich Mean Time, London, Dublin, Lisbon, Casablanca, Monrovia
I was hopeful that there would be "Rings of Power" internal consistency at least - meaning, that the production would pull various events in the Second Age closer together so that multiple "known" characters were alive at the same time. From a storytelling perspective in TV format, that makes sense to me.

However, the time/space compression going on in this season appears to also be for convenience - Durin III asking his son to "go to Lindon tomorrow" with Elrond... sure, maybe he just means "depart tomorrow", but still - that's six hundred miles through wilderness (thankfully they put roads on the Prime map, but still). That's a three month journey there (and again back). As it is not yet spring, that's a journey through winter, too!

It's the same with Celebrimbor and Elrond walking from Ost-in-Edhil to Khazad-dûm to say hi to Durin IV - that's 75 leagues or about 225 miles on the Prime map.

It is possible that "time passes" could cover a lot of this... except for Celebrimbor wanting his tower built "by spring" meaning everything in the first season is taking place in a nine month window.

I remember having this exact same issue when watching Jurassic Park (the first movie). The T-Rex breaking through the fence to attack the broken-down jeeps - the ground level between the Jeeps and the T-Rex pen went up and down for convenience so that the T-Rex could step across, but then the Jeep falls down a steep cliff into a tree-top when pushed through the same gap...? Makes for fun shenanigans but really pulls me out of the experience, personally.
Share

Sep 16
2022/9/16 23:07:32 (GMT) Greenwich Mean Time, London, Dublin, Lisbon, Casablanca, Monrovia
Personally speaking the Tolkien'ness of it all means little to me, but time compression that I quickly calculate really screws with me, even if I sometimes have not figured out what is off, my alarm bells are ringing that something is. This show, as you rightly point out above, has that going on in spades. Quite sloppy writing.

But, all that aside, I finally felt that the show had a clear grasp of where it is heading, but even that presents a worry to me. I suspect the Tower will be inundated with orcs soon and Númenor will show up just in time, throwing out Helm's Deep vibes.
Share

We are far away from Tolkien's writings on the Second Age, but for the most part the internal consistency of the TV show is holding together. They are still playing way too loose with geography and time passing for my taste, though. Have days passed since episode 3? Months? How is Celebrimbor's tower half built already? Does it really only take a few weeks (or "until Spring") to build such a massive project?

The scene with the palantir was one of the farther scenes from Tolkien's writings that was a little too much for me. Conveying to the audience that they are not all accounted for, and when Galadriel used it, it functioned much like a certain mirror from LOTR. Felt like a straight lift from the Jackson films.

On the plus side Arondir might be my favorite of the all the non cannon characters. Ismael Cordova's screen presence is captivating.
Share

He has brought just enough sensitivity while being strong still. I was most excited to see what he did with his character after the trailer and that has remained through the 4 episodes. When he is on screen I am most engaged.
Share