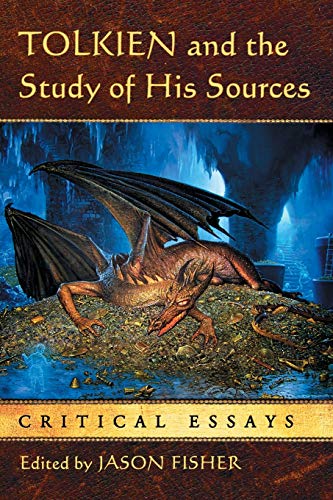 Tolkien and the Study of His Sources: Critical Essays
$19.99
TolkienGuide is an Amazon.com affiliate

587
Urulókë replied
6 hours ago
J.R.R. Tolkien's The Fall of Númenor

Dec 11, 2006
2006/12/11 19:52:39 (GMT) Greenwich Mean Time, London, Dublin, Lisbon, Casablanca, Monrovia
hi all
does anybody have any more info regarding the possible Signed Super Deluxe Children of Hurin ?
do these editions come up for sale on Amazon? and if not where and how would one purchase one?
thanks
Share

I can of course speculate. It will for sure be signed by Alan Lee and it could be signed by Christopher Tolkien also. Why I think so? Well, I was receiving info from inside Harper Collins about this edition and then suddenly I was asked to write back begin January, since they started talking with the Tolkien Estate to finalize the preparation of this signed deluxe edition. The reason for talks probably is the how and when the signing by CT will take place...
Share

Jan 11, 2007
2007/1/11 22:28:08 (GMT) Greenwich Mean Time, London, Dublin, Lisbon, Casablanca, Monrovia
According to Beren's interview with David Brawn of HarperCollins there are no immediate plans for a super deluxe edition, but something might appear in time for Christmas...
Share

Feb 6, 2007
2007/2/6 8:36:25 (GMT) Greenwich Mean Time, London, Dublin, Lisbon, Casablanca, Monrovia
It is for sure they were planning a super deluxe edition. First I did receive info on this and even received info on ISBN and how it will look like. Then suddenly the project was been rediscussed and put on hold. Reason was new discussion with the Tolkien Estate. Of course this made me think they would proceed from a signed edition by Alan Lee, towards a signed edition with both Alan Lee and Christopher Tolkien.

If they have the project ready and start discussing with the family I thought it would be about time and place to get the signatures of CT. Then one month later they told me to contact them again in January 2007, and said things had changed and that it was unsure there would come a signed edition in April 2007. So there for I contacted David Brawn in January and you saw about 60% of my answers and questions.

Something went wrong, or pre-orders of the normal deluxe edition are not as high as they expect, or something completely different.... I can contact David Brawn again for more answers if you wish. But if i do so i will need a full list of new questions. So people, if you need to ask anything to the Tolkien publishers just say what you need to know!
Share

Will Christopher Tolkien be attending any events throughout the year??
Your article mentions that he is unable to attend the UK, but will he appear in person elsewhere or via the media?

Will there be any previously unpublished material in the new editions?

One rumour that has been floating around for a long time is follow volumes of Letters by Tolkien and another Artist & Illustrator with new illustrations and letters. Are these being considered?

I'm not sure if these are the sort of questions you would like to pass on, but I'd be interested in the answers.

Feb 6, 2007
2007/2/6 10:19:01 (GMT) Greenwich Mean Time, London, Dublin, Lisbon, Casablanca, Monrovia
thats a pity about no illustrated version of Unfinished Tales mentioned in the David Brawn interview.,
maybe you could suggest to him an un-illustrated Deluxe version of Unfinished Tales, similar to the black Deluxe Silmarillion, HoME and LotR series.
also it would be interesting to know if they will ever publish Tolkien's translation of Beowulf.
and can we expect any other previously unpublished Tolkien works in the near future?
Share

Feb 6, 2007
2007/2/6 12:49:09 (GMT) Greenwich Mean Time, London, Dublin, Lisbon, Casablanca, Monrovia
I saw the new paintings from Ted Nasmith and loved them... all new ones were from UT and so I thought he was preparing an illustrated edition. It seems Brawn did not plan such an edition. Very sad, because I know Ted would love to see such edition realized.
Share

Are there any plans for a collection of Ted Nasmith art, similar to those of John Howe and Alan Lee?

I noticed a large type edition of The Children of Hurin on Amazon. Will this be in the same style as The Hobbit and The Lord of the Rings from 2002-2003? Any chance of a large type Silmarillion?

This is an old chestnut, and might be from before David Brawn's time at HarperCollins, but were any copies of the hardback edition of The Peoples of Middle-earth pulped?

Over the years there have been various reports about Christopher working on a collection of the Professor's poetry. Does David know any more?
Share

I'll repeat vidugavi's question as an important one (if and when a signed edition ever comes out): "where and how would one purchase one?"

Any news on a movie for COH? (HarperCollins is probably not part of those negotiations if they are even taking place, but might as well ask.

Feb 6, 2007
2007/2/6 23:01:27 (GMT) Greenwich Mean Time, London, Dublin, Lisbon, Casablanca, Monrovia
With regards to where the Signed Edition will be available for purchase: Here is a reply I received a couple of weeks ago from someone in Harpercollins.

"This £250 limited edition, if it happens, will be available exclusively via HarperCollins.co.uk and not available anywhere else. It's still speculative, so does not have a pub date assigned to it yet. It will probably come in the autumn, certainly not in April 2007."

Interestingly, the reply stated (though I did not ask) that it would be priced at £250. Though I imagine that the price could change (if indeed this edition ever makes it to print), but it looks that they are aiming to price it at £250.
Share