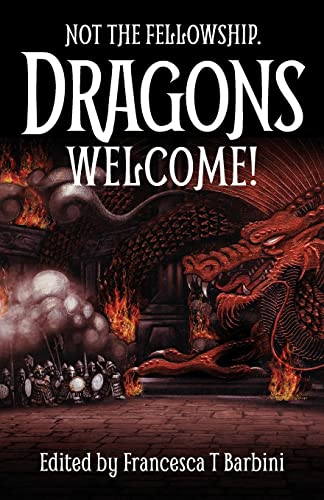 Not The Fellowship. Dragons Welcome!
$22.99
TolkienGuide is an Amazon.com affiliate

46
northman replied
39 minutes ago
The Art of Jay Johnstone, Part One

Activities: In January Unquendor member Leen Zuydgeest held an exhibition of his paintings and drawings, many of which are Tolkien inspired, in the Municipal Archive of Vlaardingen, Holland. A two-page description of the exhibits was produced. On the first of May the committee of Unquendor and guests celebrated the 100th committee meeting in a fine restaurant in Delft, Holand. Under discussion was the Unquendor. A Slotfeest was sponsored during 29-30 May in a castle in the centre of the Netherlands (and was opened by two Black Riders on horseback). On 19 June a paper was given on radio adaptations of Tolkien's work at the Dutch national convention of radioplay fans in Amsterdam, Holland. A Tolkien paper was given at the science fiction convention Con-Yak, held in Amsterdam, Holland, on 26-28 November. The Annual General Meeting was held on 11 September in Utrecht, Holland. There was a small exhibition of Tolkien work by the artist/photographer Margot Holthinrichs. On 19 September Unquendor was present with an information stand at the English Style Bazaar, organised by the Anglican church at Middachten Castle in Rheden, Holland. The yearly Joelfeest was held in Deventer, Holland, on 11 December.

Other Information: On occasion the Unquendor Pin of Merit is awarded.

Activities: It is the opinion of the innkeepers that this is the oldest Unquendor inn. It has held over 80 meetings which are held irregularly at the above address. On 20 August the smial held their Summermoot. During 1993 the group published "The Set of Five Cards" and "The Hobbittons" tape cassette featuring Tolkien's poetry set to music. The group's leader is famous for his pictures in the Beyond Bree calendars and Lembas. One of the reasons that Ar Caras is so very popular is because it developed during the years from a literary gathering into a 'hobbitic refuge', not hosting just Hobbits, but also Elves, Dwarves the occasional Ent, even Orcs and Nazgûl(!). And they all sing along with the Hobbitons, drink 'the best beer of the South Farthing', and enjoy the abundance of Hobbittic dainties and tidbits. In August, the group celebrated its own centenary, Ar Caras 100, held in the picturesque gardens of an old monastery, deep into the night singing at the bonfire. In 1995, the inn is planning a celebration of '10 years of Ar Caras'. 'Ar Caras' by the way means 'City of the King', so chosen because Nijmegen used to be the place where Charlemagne resided. Because Ar Caras is supposed to be one of the regional inns (as all inns are), the inn had a bit of a problem when people started coming from all over, so the group started the tradition of a Summermoot, held in a place where at least 25 people who want to visit Ar Caras are able. At every meeting, one of the frequent guests provides an 'introduction', a talk on a self-chosen Tolkien-related subject. Ar Caras hosts scholars and PhD's, top-managers and unemployed, 17 and 60 year olds: the discussions are getting better all of the time. Meetings are monthly.

Activities: Meetings are held once every two months.

Activities: Monthly meetings are held every two-thirds of a month at the above address and are a pleasure to attend. The inn's name may have changed to Cottage of Lost Play in 1994.

Activities: Not very active at the moment but there is hope for more activity in the future.

Activities: Meetings are held irregularity at the above address.

Activities: Meetings are held irregularly at the above address. The leader keeps the inn going even though it does not have many members (visitors) in the area, however it is a fine place to be in.

Activities: Bimonthly meetings are held at the above address. During the evening meetings, the group discusses all kinds of topics concerning Professor Tolkien and his works. They play games, listen to hobbit music and of course drink and eat and laugh a lot. The inn is working on a Middle-earth version of "Trivial Pursuit."

Activities: Four years ago the often too great number of visitors to the smial 'Ar Caras' provoked three people to establish a smial of their own to divert some of the overflow; and so Rivendell was born, the first homely home if you come over the border from Germany. It has never achieved its primary goal, but instead has found its own distinct audience and atmosphere. From the beginning Rivendell has been a meeting-place for roleplayers. Though we have had many a discussion about Tolkien, the topic has even more often to do with roleplaying. Today two of the three founders still organize the smial evenings. Every last Friday of the month the smial is open. On the even month a subject is chosen by one of the founders or guests. This subject has something to do with roleplaying and, more often than not, Tolkien. Subjects vary from 'Do you like roleplaying for the same reasons as you like Middle-earth?' or 'Is MERP suited to Middle- earth?' or 'How would you play an elf from Mirkwood?' On the odd months we try to deal with the subject of the month before in a roleplaying game. Rivendell is still very much alive after four years, more than forty smial evenings and more than sixty different visitors!

Activities: The leader, a chef, reopened the eating and drinking inn. It is the only place in Europe where you can get a real Middle-earth Hobbit meal. It is extremely popular and there is always a waiting list for it. Well, you can imagine why: a real Hobbit-mushroom pie, or Elven-cakes, or Gondor-stew. Never more than six guests, and there is a good reason for it: the (huge) table will be laden (and there is only one chef).

Activities: Meetings are held two to three times a year at the above address. On 4 September the smial sponsored Unquendor's first barbecue which, because of rain, was turned into an in-door barbecue.

This content was originally written by Hildifons Took (Sumner Hunnewell) more than a decade ago, and is reprinted here with permission. Please see Tolkien Fannish and Scholarly Activities and Publications for 1993 for the main article page.