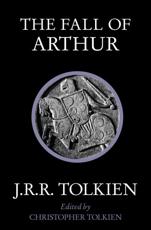 The Fall of Arthur
$9.74
TolkienGuide is a Blackwell's affiliate

"The main reason we decided to publish an English version of our journal is the fiftieth anniversary of the complete publication of The Lord of the Rings by J.R.R. Tolkien, and Tolkien 2005, the conference and convention held at Aston University in Birmingham. Members of our editorial staff are going to participate in the event not only by preparing papers and lectures and presenting the works of Polish Tolkien artists. " (quoted from the Aiglos website)