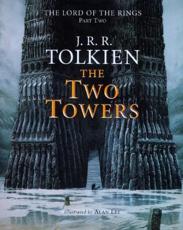 The Two Towers
$49.79
TolkienGuide is a Blackwell's affiliate

A (Very) Brief Early History of Fanzine Publications. Not yet complete (is that possible?) Please contribute, comment or contact me if you have material to add to this section. Various Tolkien articles have appeared in fan publications since the 1960s, such as Glamdring, Rhodomagnetic Digest, and Niekas. The first organized group of fans interested in Tolkien's works was called The Fellowship of the Ring, which was officially organized in a meeting of members at Pittcon (Worldcon 1960). Ted Johnstone and Bruce Pelz edited I Palantir, which quickly ran out of steam, only producing four issues over a six year period, though their British correspondent Ken Cheslin also managed to produce Nazgul's Bane for four issues in this time period. In 1962, Paul Zimmer produced a single issue fanzine called Anduril, but evidently gave up the idea when rumor said Professor Tolkien was quite displeased with the first issue. Greg Shaw began publishing Entmoot in 1965 to fill in the gap left by I Palantir, but Entmoot shifted from serious Tolkien linguistic discussion to psychidelic content and vanished after four issues as well. Hoom was created by Bee Bowman and Frank Denton in 1968 explicitly to try and provide a fanzine forum for Tolkien fans after the loss of I Palantir and Entmoot. It was after the publication of the Ace and Ballantine paperbacks in the USA in 1965 that Tolkien fandom really took off. Tolkien Society of America was formed in 1965 by Richard Plotz, publishing The Tolkien Journal and Green Dragon until 1972. In 1967 Minas Tirith Evening Star began publishing as an independent newsletter, but eventually became the official Journal of the American Tolkien Society in 1975. Also in 1967 The Mythopoeic Society was created by Glen GoodKnight, with the first issue of Mythlore being published in 1969, along with numerous other publications. They have organized an annual meeting called MythCon, with the first one in 1970 and still going.