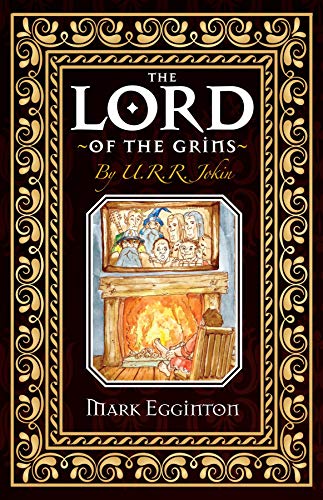 The Lord Of The Grins
£4.99
TolkienGuide is an Amazon.co.uk affiliate

708
Stu replied
Yesterday
Is The Lord of the Rings now a never-ending franchise like Marvel and Star Wars?

1031
Stu replied
Yesterday
I want to read them all.

The Middle-earth Fellowship (MEF) consists of the merger of two major groups (and some minor ones) from the 1970’s and 1980’s. The older of the groups started in 1978 in central California. They had a very heavy contingent of performers from the Barleycorn dance group popular within the Renaissance Faire community. The other group from southern California started in 1981 with high school friends that wanted to continue celebrating the works of Tolkien after the end of a local festival called The Hobbiton Bucklebury Fair. The two groups joined in 1994 after a bit of cross group mingling at joint festivals and parties (it is amazing the friends you will meet when wearing a Tom Bombadil t-shirt). The major events of the Middle-earth Fellowship are celebrations of Bilbo's birthday in the late summer or early fall, a Yule party in winter, and a big festival camping party during late spring or early summer. All events are fully costumed affairs - the campouts feature what sometimes turns out to be elaborately decorated encampments (one festival featured a two storied tower over 20 feet high with a fully functioning pub for the adults on the ground floor!). One event had a delightful performance of “Frodo of the Nine Fingers” from the Rankin Bass cartoon that had been fully re-written and fleshed out for acoustic instruments and hilarious dance moves. The 28th Festival featured a performance from Frodo, Sam, Merry, and Pippin from “Fellowship! The Musical!” of “Home’s Never Too Far Away.” Other activities of the group are a hearty publication schedule featuring not only MEF calendars but also short story booklets, a Middle-earth Passport, humorous Middle-earth travel brochures, and a 1984 short subject film of Elwing coming to Middle-earth to help a struggling Ranger of the North. The group newsletters are often illustrated with wonderful original art. Festival t-shirts have been produced showcasing the delightful designs of our artists. The highest membership numbers were during the period of the 24th to the 25th year with approximately 150 participants. The group celebrated its 30th anniversary in 2008. Middle-earth Fellowship Shirt Designs
Last modified: 03/27/09 by Urulókë
Jump to Last