The Annotated Hobbit: The Hobbit, Or, There and Back Again
£23.88
TolkienGuide is an Amazon.co.uk affiliate

395
Trotter replied
9 hours ago
Post pictures of your Collection 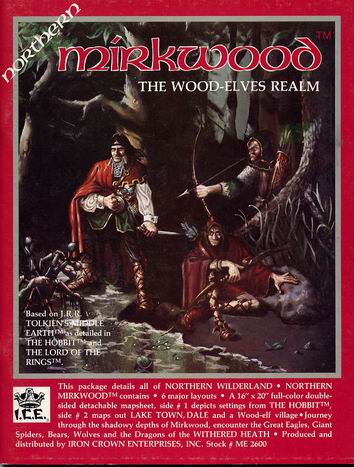 This package details all of the NORTHERN WILDERLAND and includes INTRODUCTION TO NORTHERN MIRKWOOD (T.A. 1640) Follow the Old Forest Road through the heart of Mirkwood - take the path of Oromë and the Fives of the First Age - and you'll find yourself in deep, dark woods once full of game and fish and berries. How strangely quiet the woods are now, how dreary and threatening since the Shadow of Mordor cast its pall across the land six hundred years ago. Only the Giant Spiders of the forest seem content as they lie in their shadowy lairs, alert for the slightest stir in their sticky, steely webs. Home to Thranduil's Wood-Fives, the Dwarves of the Iron Hills, and various Northmen groups of the mountains, (not to mention the Giants and Dragons of the Grey Mountains), Northern Mirkwood is a wide-open wilderland as yet untamed by any dominant civilization. Bordered by the mighty Anduin River to the west and the Grey Mountains to the north, the Northern Mirkwood region includes within its borders the ancient Mountains of Mirkwood and to the east, River Running, the Celduin. The Rhovanion plains, which reach east of the forest, provide the best grazing and farm land in the region and stand as yet unpolluted by Sauron's withering grasp. Never a center of government or a cultural magnet, Mirkwood in T.A. 1640 is recovering from the recent Dark Plague, a pestilence which struck down half of the men and beasts of the area and led to famine and great suffering in the winter that followed. To add to the region's ills, Smaug the Destroyer and his winged cousins have for centuries made their homes in the frozen wastes north of the Grey Mountains and bred in the Withered Heath of Desolation, a forsaken zone that testifies to the Dragon's powers of ruination. Far to the south, below Rhosgobel and the Narrows of the Forest juts Dol Guldur. For the past six centuries, this gloomy, mist enshrouded fortress has stood as Sauron's outpost in Mirkwood, his stepping-stone between Mordor and Angmar, and has cast its sickening and strangling shadow across the game and the greenery of what was once Greenwood the Great, Middle-earth's mightiest western forest. At the eastern edge of the forest in the eaves of Mirkwood live the Wood-Elves - immortal minstrels, multi-linguists, lovers of the good life - who have cast their spells unperturbed for centuries, quite indifferent to the Men, Dwarves and lesser beings around them. To the east a small group of Dwarves mines the Iron Hills, most of Durin's Folk having settled at Moria (Khazad-dûm) in previous centuries to dig up the vast wealth there. And what of the Northmen - what are they like? Take your pick. Wild men live here - not many, but a few genuine wild men of the woods, men of little learning and culture who live closer to beasts than to other men. (Some seem more bearlike than human.) Other bands of more-sociable Northmen have settled in larger numbers along the vales of the Anduin and on the wide plains of Rhovanion to the east of the forest, to farm and hunt and to a small extent, trade. These men maintain bonds, however loosely, with their kinsmen in Gondor. In the foothills of the Iron Hills and the Grey Mountains live mountain men - fierce Northmen wrapped in skins and furs, hunters and trappers who live most of their lives in the wild lands north of the Forest River, within earshot of the Dragon's roar. Bound to the soil and woods of the region, these proud and independent descendants of the Edain lead a clannish existence, answering to no one but themselves. All of these bold inhabitants warily await your arrival, so welcome to Northern Mirkwood, Adventurer! May your sword be quick and your senses keen! 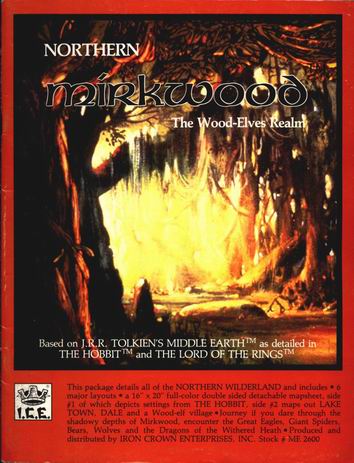