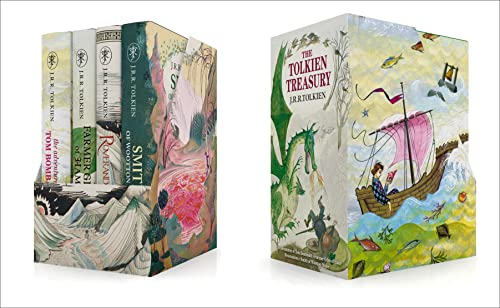 The Tolkien Treasury: Roverandom, Farmer Giles of Ham, The Adventures of Tom Bombadil, Smith of Wootton Major
£30.99
TolkienGuide is an Amazon.co.uk affiliate

766386
Trotter replied
Yesterday
In search of the world’s most valuable books, letters and laws

Early ALS, one page both sides, 4.5 x 7, blind-stamped personal letterhead, June 12, 1925. Tolkien, at the end of his five-year stint at Leeds University, and weeks before his appointment as a professor of Anglo-Saxon at Oxford, writes in his distinctive calligraphic hand to Mr. Ashton. In part: “The Vice-Chancellor had not told me—but Prof. Gough, who has an equal share of interest in your son like me, did so at once, & we discussed what we could do about it. You may be sure that we shall both do our best—I think we both have an equally high opinion of your son, in every way, & appreciate both your sacrifice and the good use he has made of it. But you must not be too downcast. If even at the worst there remains nothing for it but for your son to take an “aegrotat” degree [an honors degree conferred upon a student who, unable to take exams because of illness, would have by every expectation passed] without class, his work will not be wasted on him, he himself will have profited by it; and as for advantages in getting a job, the recommendation of Prof. Gough & myself will be worth using as much to him conceivably as a first class without such strong recommendations. I hope personally very much that somehow it may be possible for your son to come up for examination again next year. If this happens, I will do my best to help him along next session…. If only he could have realized what mild & gentle folk we ferocious examiners actually are, & how well disposed to him perhaps he would not have worried so much. But he is unusually distinguished among students in working too hard!…” Mild soiling and wrinkling, otherwise fine condition. Pre-certified John Reznikoff/PSA/DNA and RRAuction COA.