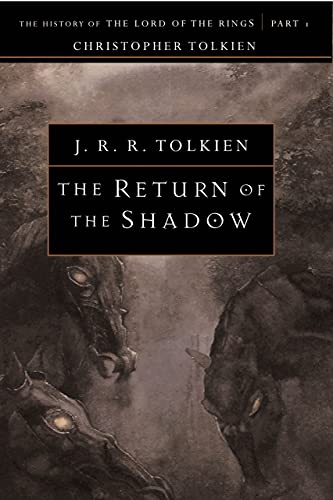 The Return Of The Shadow: The History of the Lord of the Rings, Part One (History of Middle-earth Book 6)
$11.99
TolkienGuide is an Amazon.com affiliate

British author and scholar (1892–1973) whose Lord of the Rings trilogy became one of the towering classics of fantasy literature and inspired a series of wildly popular films. ALS signed “Ronald Tolkien,” one page, 4.5 x 7, March 11, 1947. Letter to Professor P. Mroczkowski at Oxford. In full: “With all good wishes. I am glad indeed that you allow me to share a little of the proceeds of the Lord of the Rings. Especially since I guess it to be an answer to prayer; for on the way from Church on Sunday I had a sudden clear intimation that you were worried, and in difficulties, and that I should do something. Bless you both.” In fine condition, with central horizontal and vertical fold, slightly affecting first letter of signature. Accompanied by the original mailing envelope, addressed in Tolkien’s hand, its stamp having been clipped and removed. This correspondence bears a great reference to the author’s iconic Middle-Earth creation. The Lord of the Rings trilogy was published under a profit sharing arrangement in which Tolkien received an advance or royalties until the books had broken even, at which point he was entitled to a large share of the profits. The epic was still being created by Tolkien when the author pledged to “share a little of the proceeds of the Lord of the Rings” with his Oxford colleague. Upon its publication in 1954 and 1955, The Lord of the Rings proved to be a critical and financial success. In fact, the trilogy was so successful that the hardcover edition of the book broke even almost immediately and caused Tolkien to regret that he had not taken the option of early retirement. It was, undoubtedly, due to this astounding success that Tolkien was able to bestow a gift of charity upon the recipient of this letter. A precious letter referencing Tolkien’s grand trilogy. Pre-certified John Reznikoff/PSA/DNA and RRAuction COA.