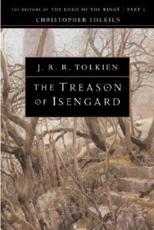 The Treason of Isengard
$40.79
TolkienGuide is a Blackwell's affiliate

766398
Trotter replied
Yesterday
In search of the world’s most valuable books, letters and laws

ALS, one page both sides, 5.25 x 6.75, July 28, 1955. Letter written shortly before the printing of The Return of the King, referencing his best-selling classic. In part: “Part of the delay is due to the labours of passing Vol. III for press amidst very many other duties. I hope you will enjoy Wol. III as much as the others—there is at any rate a lot (about 100 pages) of ‘information’ in it. I do not suppose I shall write any more about hobbits; but the success of ‘The Lord of the Rings’ has been quite surprising to the publishers as to me (possibly more so), so that it seems likely also that they will wish to publish the Legends of the First and Second Ages (written first, but refused)…even in 'The Shire' they had heard some tales of the far South.” In fine condition. Accompanied by the original mailing envelope addressed in Tolkien’s hand. After Tolkien’s first novel, The Hobbit, was met with unexpected success upon its release in 1937, his publisher George Allen & Unwin requested a second book. The drafts of the first stories he submitted, which he mentions here as “the Legends of the First and Second Ages,” were rejected and his publisher asked for a sequel because public demand was for ‘more about hobbits.’ It was this sequel that developed into The Lord of the Rings, which was then released in three volumes between July 1954 and October 1955. The delays he mentions were due in part to the intensive processes of producing appendices, maps, and indices to include in each of the volumes; the subject of this letter, the third volume entitled The Return of the King, was especially delayed. Although Tolkien returned to his earlier rejected drafts, he continued to intermittently revise them for the rest of his life without ever coming to completion. Contrary to his optimism for imminent publication in this letter, these legends went unpublished until they were posthumously compiled and edited by his son and released in 1977 as The Silmarillion. An excellent letter offering a firsthand publication history of one of the most influential literary works of the 20th century.