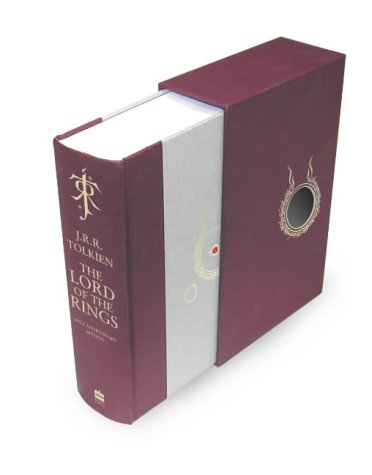 The Lord of the Rings: 50th Anniversary Deluxe Edition: The Classic Bestselling Fantasy Novel
£70.52
TolkienGuide is an Amazon.co.uk affiliate

The Fellowship of The Ring Commemorative Plate 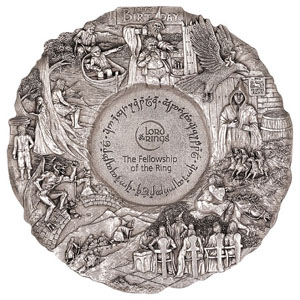 "A) It begins with Bilbo Baggins and Gandalf at Bilbo's 111st birthday celebrations, at the end of which Bilbo makes a sudden and shocking disappearance. After the party, Frodo, Bilbo's nephew, finds that he has inherited Bag End and most of Bilbo's possessions. More importantly, Bilbo has left the One Ring in Frodo's care. B) In a bid to find out more, Gandalf returns to Isengard to consult with Saruman the White, the head of the White Council. The Grey wizard is betrayed and imprisoned high upon the pinnacle of Orthanc by the traitorous Saruman. Rescue comes in the shape of Gwaihir, the Windlord, who swiftly bears Gandalf away to Edoras. C) Meanwhile in the Prancing Pony, an inn in the little town of Bree, Frodo meets Strider the Ranger for the first time. Strider rescues Frodo and his hobbit companions from an attack by the Ringwraiths but not before Frodo is injured by a cursed knife. D) Later on met by the elf-lord Glorfindel, the small company are chased by nine Black Riders. Frodo is borne away by the elven steed Asfaloth across the Ford of Bruinen. Attempting to follow, the Black Riders are swept away by a magical flood. E) At Rivendell during the Council of Elrond, representatives of the free peoples of Middle-earth decide the fate of the One Ring. After much debate, Frodo volunteers to destroy the One Ring in Mordor and eight others join him in this quest. Thus the Fellowship of the Ring is formed. F) The Fellowship of the Ring set out on their difficult journey and attempt to cross Caradhras, a large snow-capped mountain. The malice of Caradhras is felt when a large storm hits the Nine Walkers and impedes their journey. G) The Fellowship choose an alternative route, deep down through Moria. There, they meet the terrible demon Balrog. Gandalf faces this menace alone on the Bridge of Khazad-dum and falls under the Balrog's terrible might. H) The rest of the Fellowship flee to Lothlorien where the Elf Queen Galadriel grants them shelter. There, Frodo gazes into the mirror of Galadriel and sees possible futures, some of which, terrifying. I) Equipped with fresh supplies, the Fellowship continue their journey. Boromir succumbs to the lure of the One Ring and tries to take it from Frodo. He fails and, coming to his senses, repents his actions greatly. Suddenly, the company are set upon by a band of orcs and Boromir is viciously cut down while defending Merry and Pippin. J) After escaping from Boromir, Frodo attempts to continue his quest joined by Sam. They escape upon their elven boat and head to Mordor, together. The bold runes inscribed in the middle of the plate reads "One Ring to bring them all and in the darkness bind them", the very same inscription upon and within the One Ring."
Last modified: 03/11/20 by Urulókë
Royal Selangor Collectible Plates