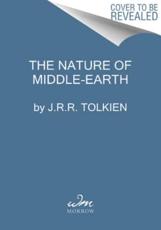 The Nature of Middle-Earth
$26.47
TolkienGuide is a Blackwell's affiliate

The Return of The King Commemorative Plate 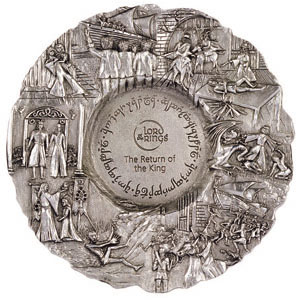 "A) It begins darkly, with the terrible Witch King at the Gates of Minas Tirith. A great, menacing shadow upon a huge steed, the envoy of Mordor exudes such evil that the defenders of the city and the orcs alike cower in fear. As in Moria, Gandalf alone faces the enemy. B) Within Gondor, Denethor is drawn to madness by the power of Sauron through a palantir and attempts to burn himself and a wounded Faramir upon a funeral pyre. C) On the Pelennor Fields, the battle rages on and King Theoden is crushed beneath his steed Snowmane, brought down by a poisoned dart. Towering above the fallen king is the Witch King upon its winged mount, a huge featherless evil creature. Only King Theoden's niece Eowyn, with Merry at her side, stands against the Nazgul. Despatching its winged mount easily, Eowyn battles and overcomes the Nazgul Lord with Merry's help. D) When all seems lost and the forces of Rohan and Gondor are almost overcome by the enemy, Aragorn appears upon a mighty fleet of ships with reinforcements and turns the tide. E) Mustering a great force, they advance upon the Black Gate of Mordor only to be caught in a trap sprung by Sauron and his messenger, the Lieutenant of the Tower of Barad-dur. A terrible battle ensues, with the forces of the free peoples of Middle-earth surrounded by hoards of orcs, trolls and evil creatures from Mordor. F) After a long struggle through an arduous journey, Frodo teeters at the edge of the Crack of Doom, struggling weakly against his desire to keep the Ruling Ring for himself. As he claims the Ring as his own, Gollum jumps out and bites Frodo's Ring finger off, finally regaining his Precious. During his mad dance of joy, Gollum accidentally trips over the edge and drops down into the bowels of the mountain. G) With the destruction of the One Ring, Sauron is finally defeated and the Fellowship, except for fallen Boromir, gather at Gondor for the coronation of King Elessar. The ancient White Crown is borne to Aragorn by the Ringbearer Frodo and set upon his head by Gandalf the White. H) On Midsummer's eve Elrond, Galadriel and Celeborn arrive in Gondor, Elrond bringing with him the Sceptre of Annuminas and Arwen Undomiel, destined to be Queen by King Elessar's side. I) Returning to the Shire, the hobbits find that Saruman has placed the peaceful haven under a yoke of tyranny. When the four hobbits waylay an escaping Saruman and Wormtongue, Frodo releases Saruman but the former wizard's taunting words stir anger in Wormtongue who lunges forward and fatally stabs his master. Wormtongue himself is brought down by three hobbit arrows. J) When all is finally restored to order, Frodo leaves to meet Bilbo, Gandalf, Elrond and Galadriel for their final journey to the Undying Lands."
Last modified: 03/11/20 by Urulókë
Royal Selangor Collectible Plates