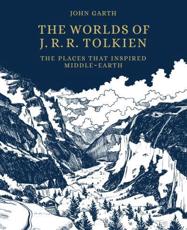 The Worlds of J.R.R. Tolkien
$18.38
TolkienGuide is a Blackwell's affiliate 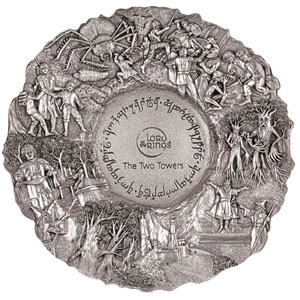 "A) While tracking the kidnapped Merry and Pippin through Rohan, Aragorn, Legolas and Gimli chance across Eomer, nephew to King Theoden of the Mark, and his eored. Eomer tells them of a fierce but victorious battle against a band of orcs, the same orcs who had kidnapped the hobbits. B) Frodo and Sam continue their journey to Mordor, while being followed by Gollum who lusts after the One Ring. Sam wrestles with Gollum and is saved from Gollum's stranglehold by Frodo and his elven sword Sting. Caught by the two hobbits, Gollum agrees to lead them to Mordor, and is recruited to the quest. C) Escaping the orc slaughter by the Riders of Rohan, Pippin and Merry find themselves in Fangorn Forest. There, they meet and enlist the aid of Treebeard, the chief of the Ents. Treebeard calls for an Entmoot, a gathering of Ents, to decide the best course of action. D) Aragorn, Legolas and Gimli track the hobbits into Fangorn Forest and are reunited with Gandalf. They proceed to Edoras and find Theoden, King of the Mark of Rohan under the spell of Grima Wormtongue and Saruman. With a flash of magical light, Gandalf breaks their control over King Theoden, driving Wormtongue back to Isengard. E) At the Battle at Helm's Deep, things go badly for the defenders when the orcs discover a culvert and sneak into the stronghold. High above stands the Hornburg, a lofty tower said to be built by the sea-kings. F) Decided at the Entmoot, the wrathful Ents and their Huorns march against Isengard, advancing upon Orthanc, Saruman's citadel. The Ents flood Isengard by breaking the walls of a dam, purging it of all evil except for Saruman and Wormtongue, held captive up in the citadel. G) At Orthanc's base, Saruman casts Gandalf's offers of peace and freedom back at him. Left with no choice, Gandalf utters words of power which shatter Saruman's magic staff and banishes the former Istari from the wizards order. H) In anger, Wormtongue throws at Gandalf the one thing Saruman would keep from his enemies, his palantir. Drawn by its mystery, Pippin steals the globe from Gandalf in the night and gazes into its depths. What he sees shocks Pippin into a faint. I) Frodo and Sam are captured by Faramir, Captain of Gondor and brother of Boromir. Faramir questions Frodo on his quest, especially on Boromir and Frodo's relationship with Boromir. It is then that Boromir's death is revealed to Frodo and Sam. J) After leaving the men of Gondor, Frodo and Sam are led by Gollum into Torech Ungol, Shelob's lair. The terrible spider guardian of the Cirith Ungol mountain pass stings Frodo and in a fit of anger Sam attacks, wounding her with his sword. The battle with the arachnid is won but Frodo's senseless body is borne away by orcs, with Sam trailing behind. "
Last modified: 03/11/20 by Urulókë
Royal Selangor Collectible Plates