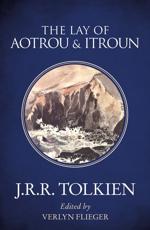 The Lay of Aotrou and Itroun Together With the Corrigan Poems
$9.79
TolkienGuide is a Blackwell's affiliate

RÓMENNA MEETING REPORT
October 22, 1983
We began our discussion of the final chapter of Quenta Silmarillion, "Of the Voyage of Eärendil and the War of Wrath," with the comment that although it is a short chapter, it is rich in imagery. Eileen said, however, that as far as she was concerned the battle scenes could have been shorter. The attack on the settlement at the mouths of Sirion by the remaining sons of Fëanor (after their usual "Please give us the Silmaril or else" message had been refused) was characterized as "psychopathic." It was pointed out that Maedhros and Maglor didn't feel that they had any choice in the matter, being driven once more by their Oath. Amrod and Amras, who have never done anything notable till now (it was suggested that their sole purpose in existing was to help prove Feanor's fecundity), finally get bumped off during this battle. Elwing escapes with the Silmaril; meanwhile her sons, Elros and Elrond, are captured and eventually are taken under Maglor's wing. His great affection for them was explained both as a reaction against the evil deeds he had been driven to do by the Oath, and by the fact that he never seems to have had any children of his own. (None of the sons of Fëanor save Curufin seem to have had any, in fact.) Finally, it was pointed out that the Three Great Wrongs achieved by the Oath (the Kinslaying at Alqualondë, the attack on Doriath, and the attack on Sirion) are a perfect Celtic-style Triad. Meanwhile, Elwing is given the shape of a sea-bird by Ulmo and goes seeking for Eärendil. Alexei characterized this and other instances of shapechanging earlier in the book as a shamanistic element. The relationship between Eärendil and Elwing was seen as the antithesis of that between Aldarion and Erendis later on: Elwing wants to accompany her husband on his voyages and share his fate. It was suggested that Eärendil and Elwing were Tolkien's ideal of marriage, and Aldarion and Erendis is his picture of what the reality is more often like. Eärendil's tale, it might be noted, was one of the earliest Tolkien wrote; "Aldarion and Erendis" presumably came after he had been married for awhile. Eärendil's arrival in Valinor was described as literally dreamlike; everyone could recall dreams of coming to some place and finding it deserted, as Eärendil finds Tirion. In fact there is a logical explanation (it is festival time and all of the inhabitants are off celebrating), but the effect is no less eerie. Eärendil wanders forlornly through the shining, empty city, and is almost ready to give up when out of nowhere he is hailed by Eönwë. At this point the discussion digressed slightly as we considered the feasibility of translating Eönwë's hail into Quenya. Eärendil is brought before the Valar and makes his plea for aid for both Elves and Men. Oddly, when his own fate is debated by the Valar and his descent from Tuor and Idril brought up, their fate is never mentioned, though they had earlier set sail for Valinor themselves, and according to some traditions had arrived there. Not in this version, evidently! At last both Eärendil and Elwing are given a choice as to which kindred they will belong to. Eärendil leaves it up to Elwing, and she, having been in the meantime befriended (somebody said "brainwashed") by the Teleri, chooses Elvenkind. Vingilot becomes a UFO and Eärendil the first "astronaut." The appearance of his new star in the West is greeted with wonder, as a sign of hope to Elves and Men. The War of Wrath follows, also called the Great Battle, which is so great that it completely rearranges the geography. There was speculation about the number of lives that must have been lost when Beleriand was "broken" and sank into the sea, but it's possible that the areas had been previously evacuated. Margaret commented that she'd always loved the image of Eärendil swooping down in his flying ship to attack Ancalagon the winged dragon. Somebody else made an unkind remark about Marvel Comics. Morgoth shows his true colors by running and hiding, but is finally dragged out and defeated by the Valar. The Silmarils are taken from him and put into the care of Eönwë. This naturally creates a problem for Maedhros and Maglor, the last remaining sons of Fëanor. Their request that the jewels be returned to them having been refused, the only possible course of action seems to be to take them by stealth or force. An agonized debate ensues as Maglor protests this action, but Maedhros finally persuades him that again they have no choice. When they are at last in possession of the jewels, however, the Silmarils burn them. It is clear that they have been made evil by their actions and have forfeited any right to their father's works. Maglor is able to cast away his jewel and sublimate his pain through song, but Maedhros, who quite possibly lacks this outlet (he is one-handed, symbolically if not actually unable to create), can't live with himself any more, succumbs to despair, and throws himself into a chasm of fire, Silmaril and all. As the Quenta Silmarillion draws to a close, most of the Elves return home to Valinor, and Morgoth is thrust out of Arda into the Void; but his works live on, to become the subject of future stories.
Previous: September 10, 1983 - Next: November 20, 1983
All contents copyright © 2007 Margaret Dean, all rights reserved
Last modified: 09/18/07 by Urulókë
Jump to Last