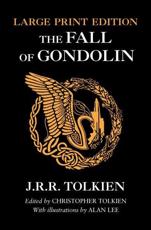 The Fall of Gondolin
$19.94
TolkienGuide is a Blackwell's affiliate

760110
Mr. Underhill replied
May 17
Welcome to the Rings of Power discussion forum!

RÓMENNA MEETING REPORT
August 6, 1983
We started off our largest meeting to date with discussion of "Of the Ruin of Doriath." A survey of the travels of Húrin after his release from captivity revealed that he is the only one who ever listened to Melian's advice. He was able to see his mistake and put away his bitterness toward the rulers of Doriath. There was some concern, again, over whether Húrin was damned by his suicide (there had been similar concerns voiced at earlier meetings about Túrin and Nienor). It was suggested that Húrin's saying of Morwen "She was not conquered" indicated that she, at least, escaped damnation. After Húrin's departure, Thingol begins to meditate on the Silmaril, and to be possessed with the same greedy love of it that Fëanor had, but with less reason, it was pointed out, since Feanor had fashioned the jewels and Thingol had not. He has the Dwarves set the jewel in the Nauglamír of Finrod Felagund, which Húrin had brought from the ruins of Nargothrond. The Dwarves, not surprisingly, decide they'd rather keep the Silmaril for themselves, and slay Thingol, thus leading to a war between them and the Elves of Doriath. A tragic irony was noted as the Nauglamír, created as a symbol of friendship between Elves and Dwarves, becomes a bone of contention between the two races. Here there was a digression on race relations (wherein it was noted that Elves and Maiar get along better than Elves and Men, or Elves and Dwarves), on geography (how does the Silmarillion map relate to the Third Age map), and the immortality or otherwise of elf-human crosses (which was seen as an example of Lamarckian genetics) . Getting ourselves back to the topic, we noted that after defeating the Dwarf-host with the help of the Green-elves and the Ents (here appearing for the first time), Beren has the good sense to dump the treasure in the river. If there was ever any doubt about Beren's "sainthood," this action should lay it to rest. He does, however, recover the Silmaril. His and Lúthien's son Dior assumes the kingship of Doriath, and when the Silmaril is sent to him, he knows that Beren and Lúthien have at last died. At this point the sons of Fëanor get into the act once more, sending messages to Dior saying, more or less, "Please give the Silmaril back or else." Dior refuses, and the sons of Fëanor attack and lay waste to Doriath. Dior is slain, and his young sons Elured and Elurín are abandoned in the forest by Celegorm's people (it was noted that Maedhros characteristically repents of this action and tries to find the children, but with no success, after which he probably gave Celegorm's people a royal chewing-out). The Silmaril, however, is saved by Dior's daughter Elwing, who flees to the coastal lands of Nan-Tathren with a remnant of the people of Doriath. But Doriath as a kingdom is at an end. We now turned to the next chapter, "Of Tuor and the Fall of Gondolin." It was noted that Gondolin pursues the classic policy of isolationism, shutting itself off from the outside world and its problems, to concern itself with its own affairs. This policy works no better for Gondolin, in the end, than it has for countries in the Primary World who have used it. When Tuor comes to Gondolin with Ulmo's warning, Turgon will not listen to him, having fallen prey to the feelings Ulmo warned against: "Love not too much the work of thy hands or the devices of thy heart." Here again is the fault of Fëanor in a new form. This possessive love is also felt by Maeglin for Idril, and it is his desire for her and for power that eventually leads him to betray Gondolin when he is captured by Morgoth. Morgoth thus finds out the location of Gondolin, and proceeds to employ a tactic that has since been used in our own day: attacking on a holiday (cf. the Tet Offensive and the Yom Kippur War, not to mention Washington crossing the Delaware and wiping out a bunch of Hessians who had been making merry on Christmas). Fortunately, Idril has had an escape route constructed, making sure that Maeglin didn't hear about it. She, Tuor, their son Eärendil, and a small group of followers are able to flee the ruin of Gondolin. It was noted that Idril employs the same ruse that was to serve Fredo and Sam ages later: tricking evil by going toward it (the escape route was constructed to the north, in the direction of Thangorodrim). Eventually the refugees come to the coasts of Beleriand where they will eventually join up with the refugees from Doriath (and Eärendil meets Elwing). The voyage of Earendil is foreshadowed by Ulmo's embassage to the Valar on behalf of the embattled Children of Ilúvatar. His plea is refused, and it is stated that only a representative of both Elves and Men will be able to succeed in persuading the Valar to intervene. It was about at this point that Alexei arrived (having missed the bus), to point out that Ulmo corresponds in symbols to the Gabriel of cabalistic literature, having the attributes "water-messenger-horn." He also commented that the death of Turgon (falling from his own tower) resembles the Tower of the Tarot, whose meaning might be very well expressed as "Love not too much the work of thy hands. . . ." In the tradition of the Beren and Lúthien ballet and the Túrin operatic cycle, it was suggested that the Fall of Gondolin would make a terrific disaster movie. And with this the discussion came to a close. --reported by Margaret Purdy
Previous: July 9, 1983 - Next: September 10, 1983
All contents copyright © 2007 Margaret Dean, all rights reserved
Last modified: 09/18/07 by Urulókë
Jump to Last