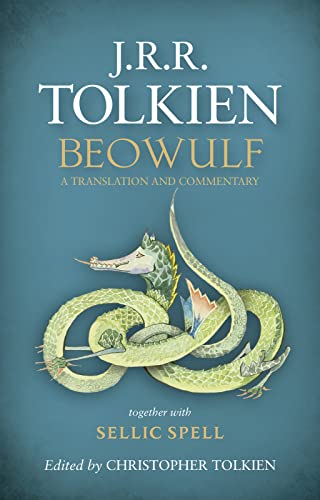 Beowulf: A Translation and Commentary
£18.17
TolkienGuide is an Amazon.co.uk affiliate

The discussion began with a reading by Margaret Purdy of an article from Amon Hen #57 by Denis Bridoux, called "The Fëanor Complex," which speculates on the effect on Fëanor's character of growing up without a mother. This naturally led into a discussion of Fëanor, after Alexei noted in passing the idea of the floating island (Eressëa, on which the Elves were ferried across to Valinor), which is an unusual concept in English myth, though it crops up in Russian and South Pacific mythology.

Alexei commented that the "Fëanor Complex" might apply to Tolkien himself, who also lost his mother at an early age. Perhaps Fëanor is Tolkien's dark side? There were protests that Tolkien's mother didn't die until he was twelve or so. Fred noted that Fëanor was not all bad. Alexei agreed; yes, that's what makes him interesting. Fred compared him to Melkor; he is not a villain on that scale, but they have characteristics in common. Alexei and Margaret both pointed out Fëanor's great love for his father, which was even greater than his love for the Silmarils.

Eileen said that she had been surprised by the Elves in The Silmarillion; she expected them to be angelic. The Elves in LoTR foster this expectation; however, it was pointed out that by the Third Age the Elves are considerably older and presumably wiser. A discussion of Fëanor's children led to another comment from Eileen that Tolkien doesn't really mention children. A discussion of the Elves of Valinor in general ensued. Alexei said that their culture was not medieval. Their weapons were imitated from those the Valar used in their wars with Melkor. Elves had no wars until the massacre of the Teleri at Alqualondë. Margaret noted that all of the Elves' weapons were made in secret; no doubt each weaponsmith thought that it was his own idea.

The kings of the Elves in Valinor were discussed. Randolph mentioned that scholar kings are rare, at least among humans. Alexei agreed, though he cited the examples of Frederick I and Frederick II, as well as Prince Rupert. Margaret pointed out that a king in the usual sense was hardly needed in Valinor. The kingship seems more symbolic than anything else; Tolkien's universe is inherently heirarchical.

The talk then turned to the real villains of the piece. Comment from Fred: "Bringing Melkor into Valinor was like bringing the legions into Rome." He then mentioned Tolkien's experience of being bitten by a tarantula in South Africa and suggested this as a source for Ungoliant, the spider-monster. Margaret cited one of Tolkien's letters in which he denied any conscious aversion to spiders ("I generally rescue those whom I find in the bath"). Randolph wanted to know what Ungoliant was, anyway. Alexei answered that she was probably an Ainu, then went on to speculate what would have happened if she had indeed tried to eat the Silmarils. Margaret: "Massive heartburn." The Silmarils were hallowed and would burn any evil being who touched them; e.g. Carcharoth 'the Wolf, who swallowed one and was driven mad by the pain. It was noted that Morgoth actually wore the Jewels in the Iron Crown, which must have been a constant torment to him.

The discussion then went back to Fëanor. Randolph said that he was power hungry. Alexei compared Fëanor to Science Fiction-and his wife Nerdanel to Fantasy (SF exhibiting the desire to manipulate, fantasy to experience things as they are [?] [I don't remember the argument too well]). Randolph compared him to the archetypal mad scientist. Margaret pointed out his undeniable gifts; he really was the first and best at many pursuits (e.g. the Silmarilli, the Fëanorian alphabet, etc., etc.).

Randolph called attention to the fact that weapons were suggested to the Elves by Melkor (p. 69), contradicting Alexei's earlier suggestion that the Elves had imitated weapons of the Valar. (Did the Valar need/use weapons?)

Fred commented on the family-mindedness of the Elves. Fëanor just stuck to his family, and vice versa; when Fëanor was exiled, his father Finwë went with him, giving up the kingship of the Noldor. Alexei thought that Finwë was an interesting character in his own right. Margaret noted that Finwë had lost a couple of people already that were close to him (Elwë, who stayed behind in Middle-earth to become King Thingol, and Míriel, his first wife who refused rebirth). Perhaps this was why he stuck so close to Fëanor. Randolph noted that the family had a temper. Fëanor was hotheaded and so were most of his sons (Maedhros and Maglor being exceptions).

Eileen pointed out that both Míriel and Finwë dropped responsibility at crucial moments; Míriel at the birth of Fëanor ("hold me blameless in this") and Finwë at Fëanor's exile ("I hold myself unkinged"). Randolph: What if they hadn't? Margaret: "You are never told what would have happened."

Probably in connection with Finwë's abdication, Margaret commented that in the normal course of things, there would be no succession to kingships, etc., because Elves do not die naturally. Alexei then brought up an interesting parallel: Georges du Maisel[?]'s triad of Fertility, Valor, and Spirit could be applied to Finarfin, Fingolfin, and Fëanor respectively, the three children of Finwë. Finarfin was the most beautiful of the three and Fertility is often symbolized by beauty (he also had five children, but then Fëanor had seven); Fingolfin was the bravest, and Fëanor was of course the creative one. (See p. 60.)

Comment from Eileen: "lt [The Silmarillion] should be so much longer."

Alexei cited parallels to Tolkien's use of the North and South Waste Lands in Valinor (Araman and Avathar). Like Charles Williams in Taliessin Through Logres and C. S. Lewis in The Pilgrim's Regress, Tolkien uses the South as a pole of dissipation. Randolph noted that the book never says precisely where Ungoliant comes from or what she is. Alexei maintained that Tolkien probably believed her to be an Ainu. It was most likely somewhere in here that Ungoliant was compared to a quantum black hole (in connection with her finally getting so hungry that she ate herself).

Randolph then read aloud the passage (pp. 78-9) in which Fëanor is asked by the Valar to give up the Silmarils in the hope that their light may restore the Trees. Alexei commented that Mandos has bad manners (breaks into the conversation). Margaret pointed out that Feanor's decision would not in fact have affected the Trees, since at that point Melkor had already stolen the Silmarils, but that his choice did affect his own later actions. Had he decided to give up the jewels, possibly such acts as the Kinslaying would have been avoided. Alexei noted that Fëanor repeats Melkor's mistake in forgetting (or choosing to forget) that the Silmarils' light was not his own creation; similarly, Melkor tended to think of Arda as his own private preserve. Melkor also desires the Silmarils, though they are of no use to him; it was suggested that they are reminders of the Flame Eternal, which Melkor sought before the Beginning of Days or the creation of Arda.

It was about here that the company decided to take a break and munch out on superior smoked ham and rye bread, and also a chocolate cake with "Happy Birthday Bilbo and Frodo" written on it in Tengwar, admire Eileen's extensive book collection, and listen to Fred read "Raiders of the Lost Orc" from a recent issue of The Westmarch Chronicle. Final point brought up in discussion: the three Elven Rings corresponded to Air, Fire and Water. What about the Ring of Earth? Answer: that was the One Ring, most likely. After all, Sauron was in origin a Maia of Aulë.