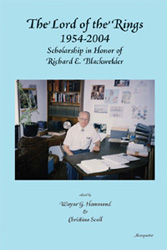 "New research by twenty scholars of J.R.R. Tolkien is now available from the Marquette University Press. The articles were originally presented at the October 2004 conference, "The Lord of the Rings, 1954-2004: Scholarship in Honor of Richard E. Blackwelder," organized by the Marquette Libraries' Department of Special Collections and University Archives. The international conference celebrated the fiftieth anniversary of the publication of Tolkien's masterpiece, as well as the opening of Marquette's new John P. Raynor, S.J., Library. Half of the conference participants focused their research on The Lord of the Rings and their papers are a significant addition to the scholarly literature on the novel. Other presenters investigated the larger body of Tolkien’s notable achievements--as a writer of fiction, a maker of language, and one of the leading philologists of his day." (from the publisher)