General Topics >> What were they thinking?!
By Urulókë

What were they thinking?!

Jun 13, 2007
2007/6/13 22:46:31 (GMT) Greenwich Mean Time, London, Dublin, Lisbon, Casablanca, Monrovia
So here's a question for Tolkien Enterprises (the owner of the movie and merchandising rights for The Hobbit and The Lord of the Rings, not to be confused with the Tolkien Estate, which owns the literary rights to those works, and all of the rights for all other works from J. R. R. Tolkien): Where is the line between sharing our love of Middle-earth through the process of sub-creation, marketing and capitalism, and trashing Middle-earth for a quick buck? Actually, I'm not quite being fair here, as the object of my rancor is being produced by Hawthorne Village, who sub-licensed from New Line Cinema, who sublicensed from Tolkien Enterprises, who bought the rights from J. R. R. Tolkien a long time ago. But someone in that chain should have realized that a line was being crossed. And I am not saying that the line hasn't been crossed before and won't be again. But this, this is worthy of inaugurating my new Collector's Guide category of "What Were They Thinking?" An electric train set, "emblazoned with heroic scenes and characters from the movie." To quote the press release from Hawthorne Village, "You'll feel as if you've been transported to Middle Earth[sic]." Here's an image for you: 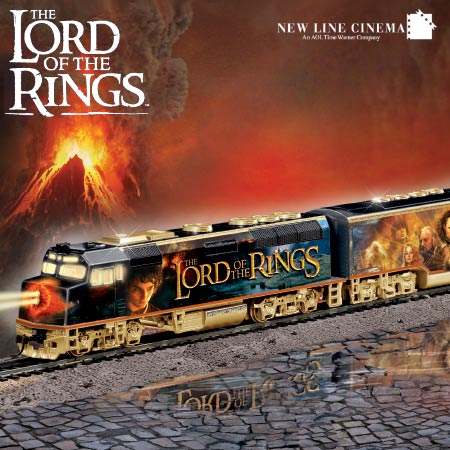 Here's the Collector's Guide page, if you are really interested. I enjoyed the movies, separate from the books. I enjoy collecting stuff, and certainly have found a focus around Tolkien's works. There has been a ton of quality merchandise produced under the New Line Cinema umbrella (regardless of whether you think the movies were quality) - the amount of sheer effort that went into the artwork, sculptures, jewelry and other derivative materials from the movie has produced some real gems. Even Tolkien had at least one character in The Lord of the Rings collect a souvenir, just for memorabilia. It's a natural part of the human condition, to accumulate memories, and to hold on to things that trigger good memories (or sometimes bad, but that's another post), or that symbolize something to us or others, or that we think may be useful sometime in the future to us or others, or that are just plain interesting, even if only to just us. I just find it hard to imagine that anyone would apply any of those cases to a train set with pictures from this particular movie on it. What were they thinking... (Many thanks to Wendell Wagner who brought this to my attention through the Mythopoeic Society mailing list.)
Share