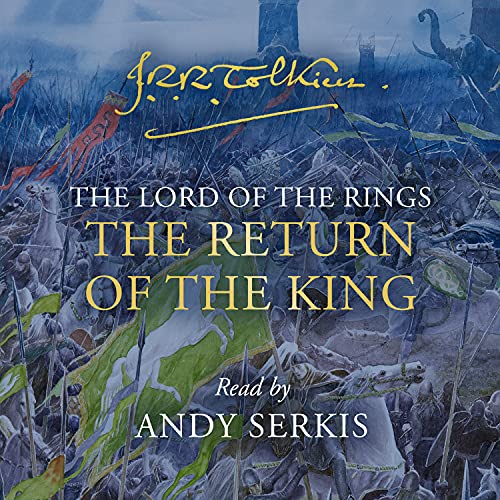 The Return of the King: Book 3 (The Lord of the Rings)
$43.54
TolkienGuide is an Amazon.com affiliate 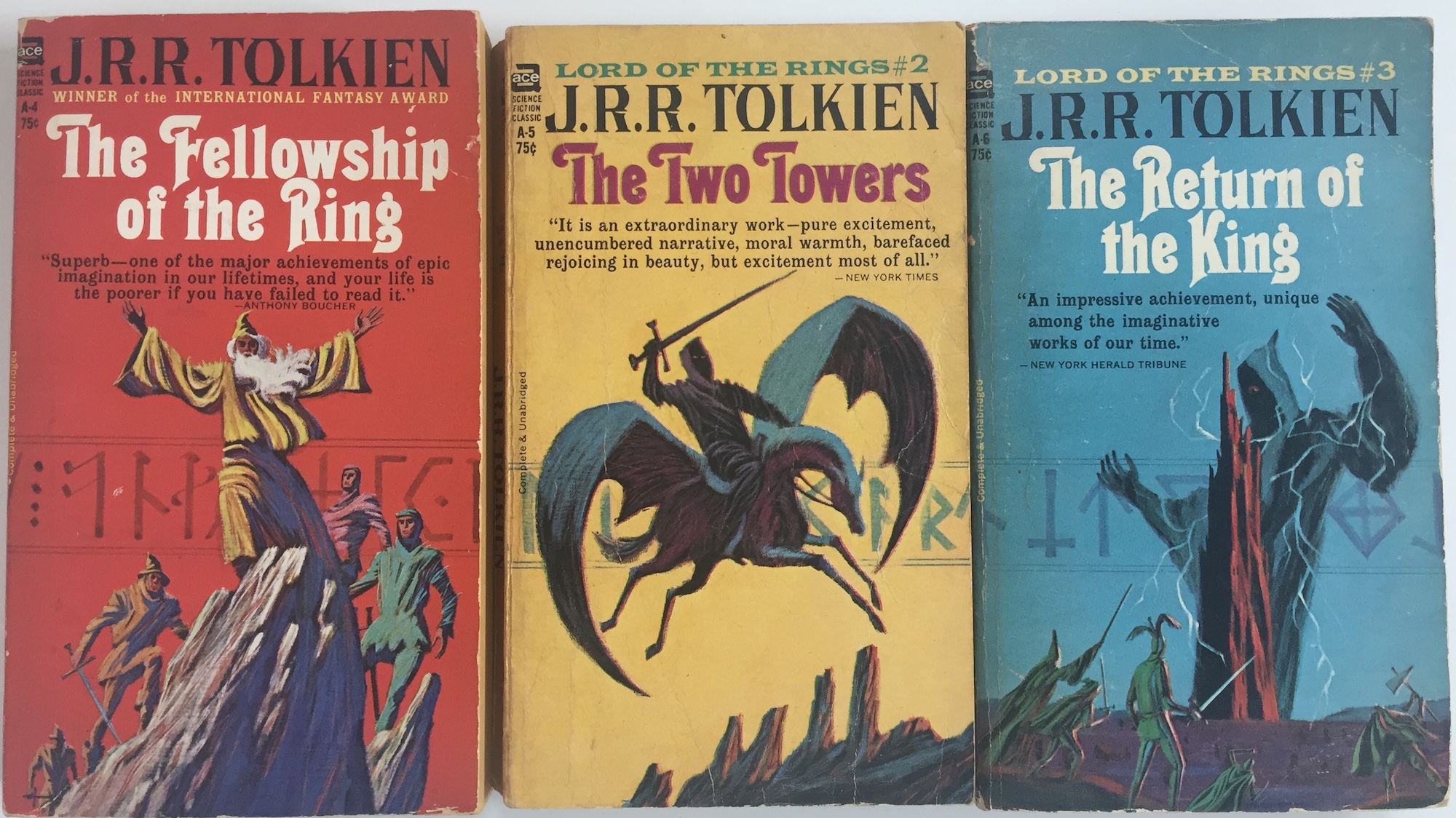 In May of 1965 Ace Books published what are now considered the "pirate edition" of The Lord of the Rings, in three paperback volumes priced at 75¢ each. For a full background and discussion of the Ace Books Controversy, see Scull and Hammond's The J.R.R. Tolkien Companion and Guide - Reader's Guide Part 1, pp. 1-8. My particular focus here is on the cover art that was used on the three volumes, as I recently ran across some fun information to share.

The three covers (and title page illustrations) were produced by Jack Gaughan (wikipedia article here) who frequently made cover art for Ace books from various authors. There is a brief mention of Gaughan in the Companion and Guide - Reader's Guide Part 1 on p. 563 in the Illustration section, where it only says "Gaughan's pictures are comparatively true to the story (or perhaps one should say, they deviate from it less)" when comparing them to Barbara Remington's art for the "authorized editions" from Ballantine that were released a few months after the Ace editions.

It has been well known that Barbara Remington was rushed to paint her covers without even having time to read the books (see her interview speaking of this here: Connecting with History - An Interview with Barbara Remington). What interested me (and prompted this quick post) was that Jack Gaughan was under similar pressure, and had a similar apology to fans for his cover art, but the tidbit I ran across yesterday differs from what is reported in Hammond's Bibliography.

...all have covers by Jack Gaughan. I was bothered by one for it showed the Nazgul riding bat-winged Pegeses while Tolkien himself described them as monsters left over from a previous age and having long snake-like necks. Most fan-artists have interpreted these as impossibly large Pterodactyls.

(It is also interesting to note that Ed mentions only having seen a proof copy of Return of the King at this point, so it is possible that The Two Towers was published before June 15th 1965).

Dear Ed,
So as to keep the record straight -- the error (flying horse instead of pterodactyl) on the Two Towers cover is mine alone. I had to read the last two books of the trilogy and lay out the covers under the pressure of a short deadline -- as a result I could not read them carefully (which I try to do, usually) -- by the time the error was discovered it was too late to change the thing. My apologies to Tolkien people!

Jack Gaughan is said to have painted all three covers for the Ace LR in a single weekend. He did not have time to read the book, but was 'talked through' his art by fantasy writer and critic Lin Carter. The runes in the background of his paintings for LR have no meaning.

Given Jack's letter in Niekas, it seems likely that he was not pressured for Fellowship, but then with the controversy and time pressure once the first book was published, both he (Jack) and Barbara Remington were significantly rushed to get their respective books out within a few short months and all of the artwork was rushed and not based on close reading of the text.

Jul 29, 2018
2018/7/29 16:09:27 (GMT) Greenwich Mean Time, London, Dublin, Lisbon, Casablanca, Monrovia
This is fantastic, Jeremy, thanks for posting! Love that detail of Ed seeing the RotK proof. It would be so great if the publication dates for these could be nailed down.
Share

Jul 30, 2018
2018/7/30 16:06:55 (GMT) Greenwich Mean Time, London, Dublin, Lisbon, Casablanca, Monrovia
Glad you liked it Berelach, I was also quite pleased to run across the mentionm of the RotK proof. Hoping someday one shows up! I am also thinking of going through my fanzines looking for mentions of when the Ace editions showed up in bookstores to see if there is more info to be gleaned.

By the way, in my research for this post I noticed that my copy of Niekas #12 has a faded (mis-printed?) line or two of text that are quite hard to read. If anyone else has a copy, can you PM me so I can confirm the wording I am missing?
Share

Jul 30, 2018
2018/7/30 21:31:08 (GMT) Greenwich Mean Time, London, Dublin, Lisbon, Casablanca, Monrovia
Is anyone interested in seeing some photos of the correspondence between J.R.R. Tolkien and Donald Wollheim (Ace Editor), along with some interesting newspaper clipping from that period? If so I will post a few, didn't want to clutter up the forum with photos if no one was interested.

2018/7/30 22:15:02 (GMT) Greenwich Mean Time, London, Dublin, Lisbon, Casablanca, Monrovia
Sure, I’d love to see some! There likely are copyright concerns around the letters, but the newspaper clippings can definitely be shared publicly.
Share 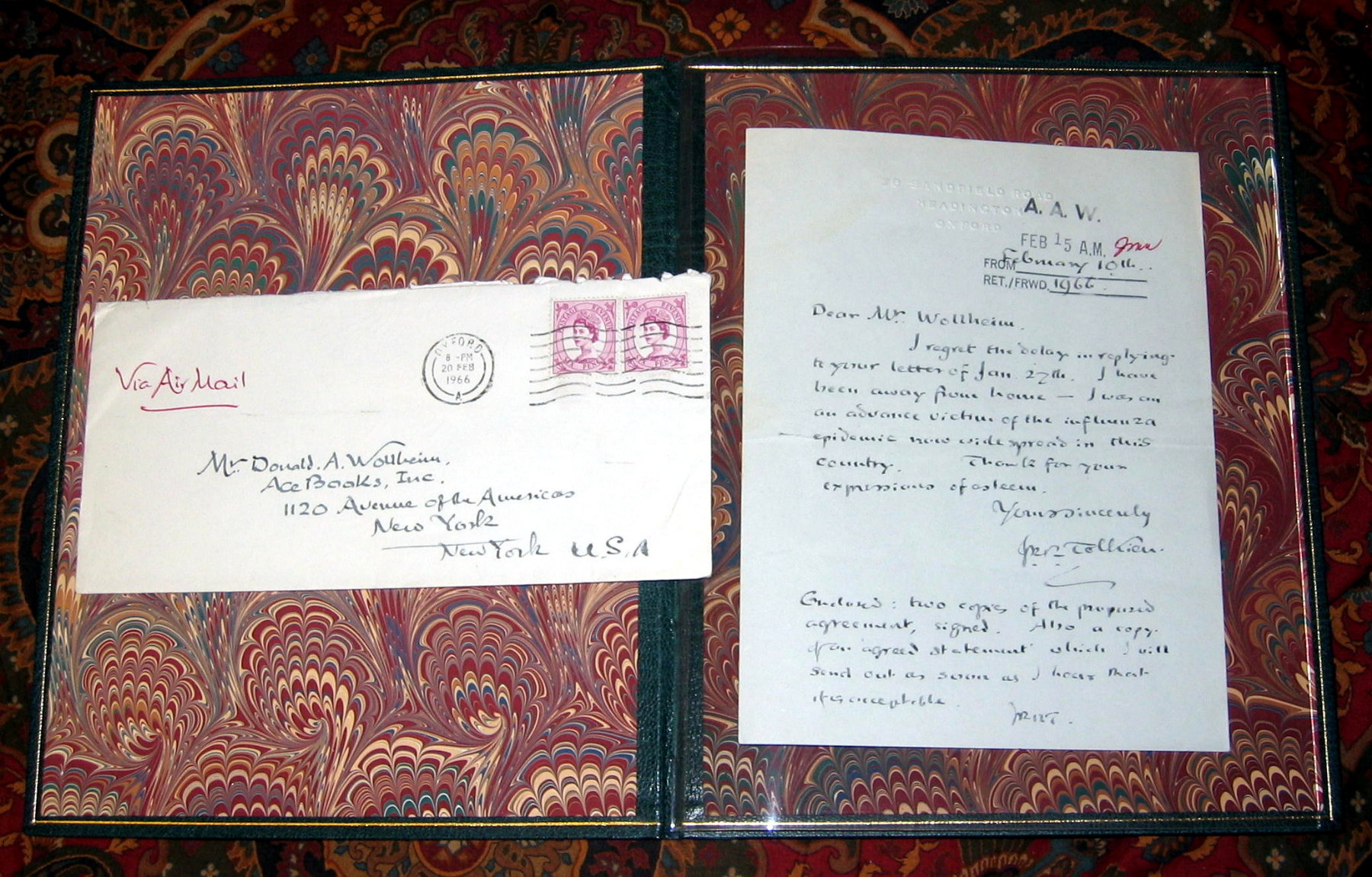 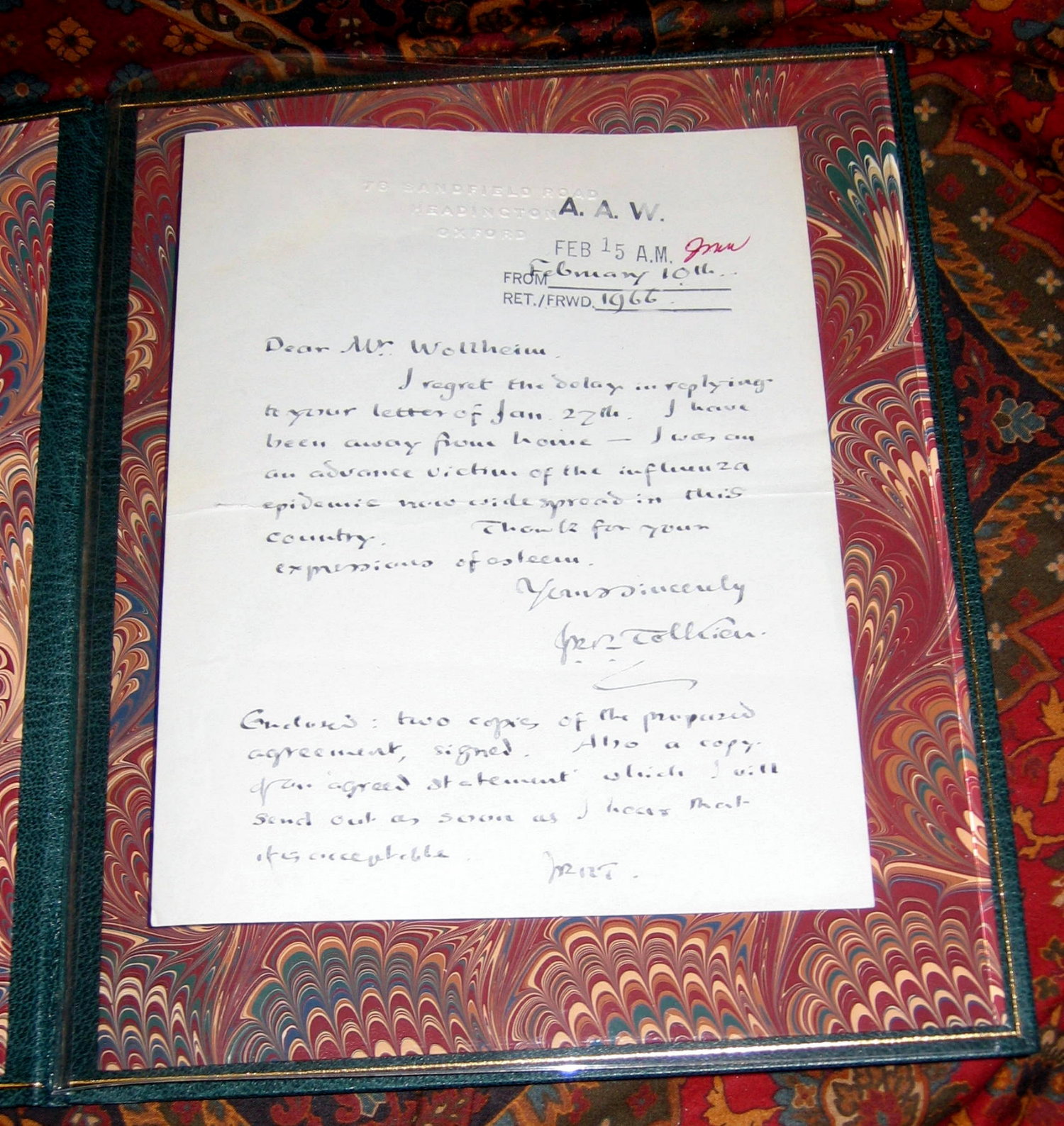 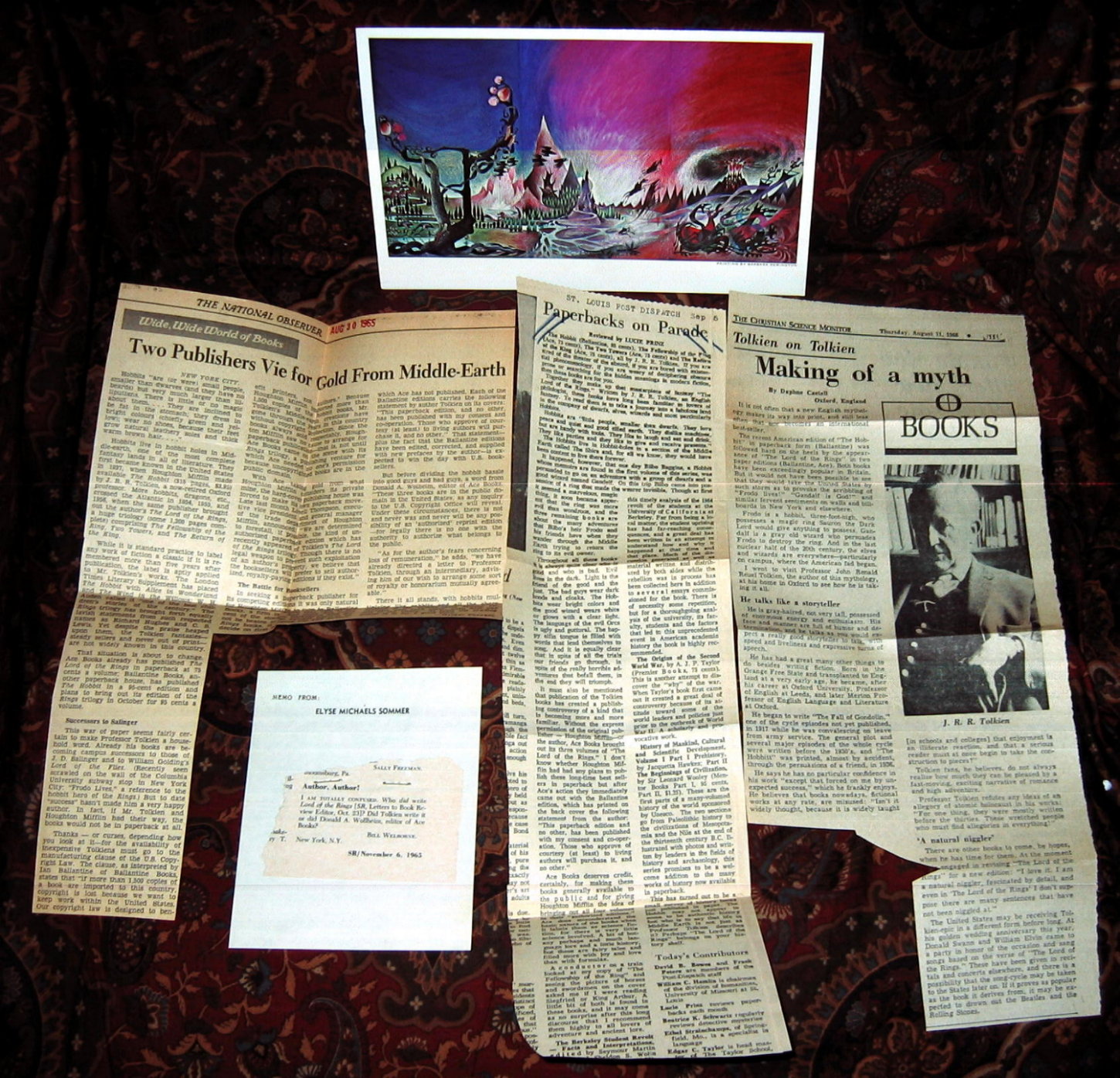 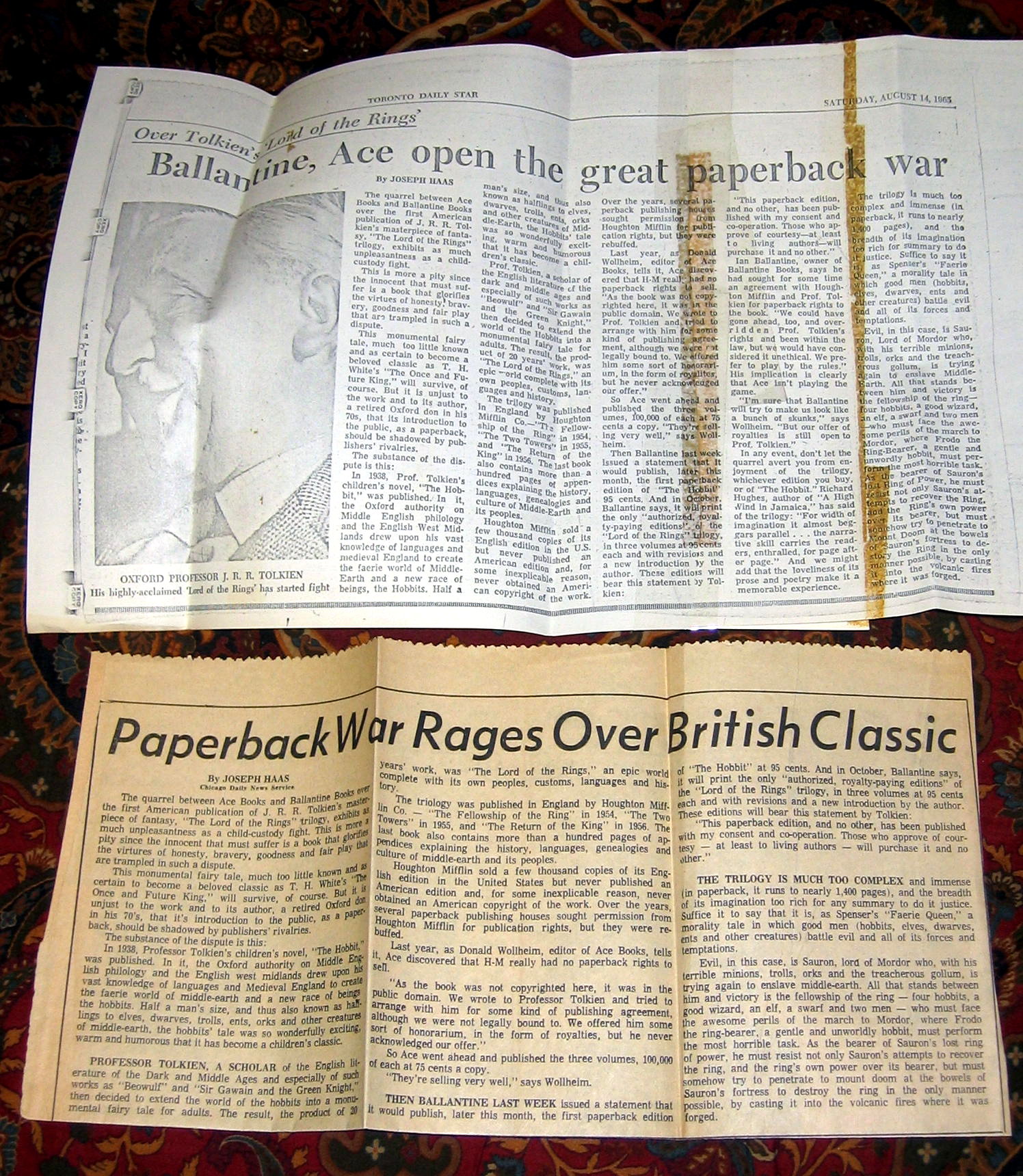 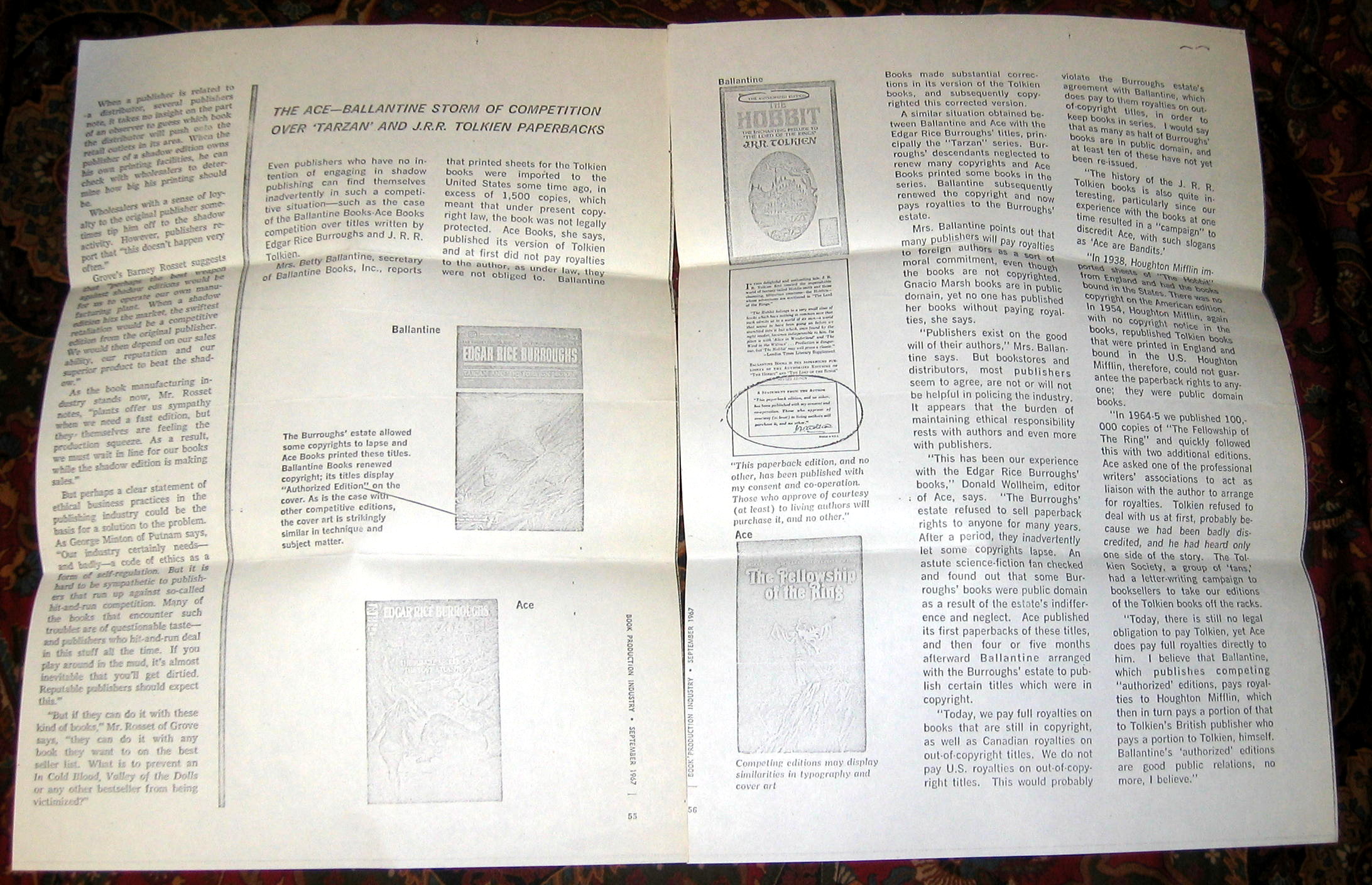 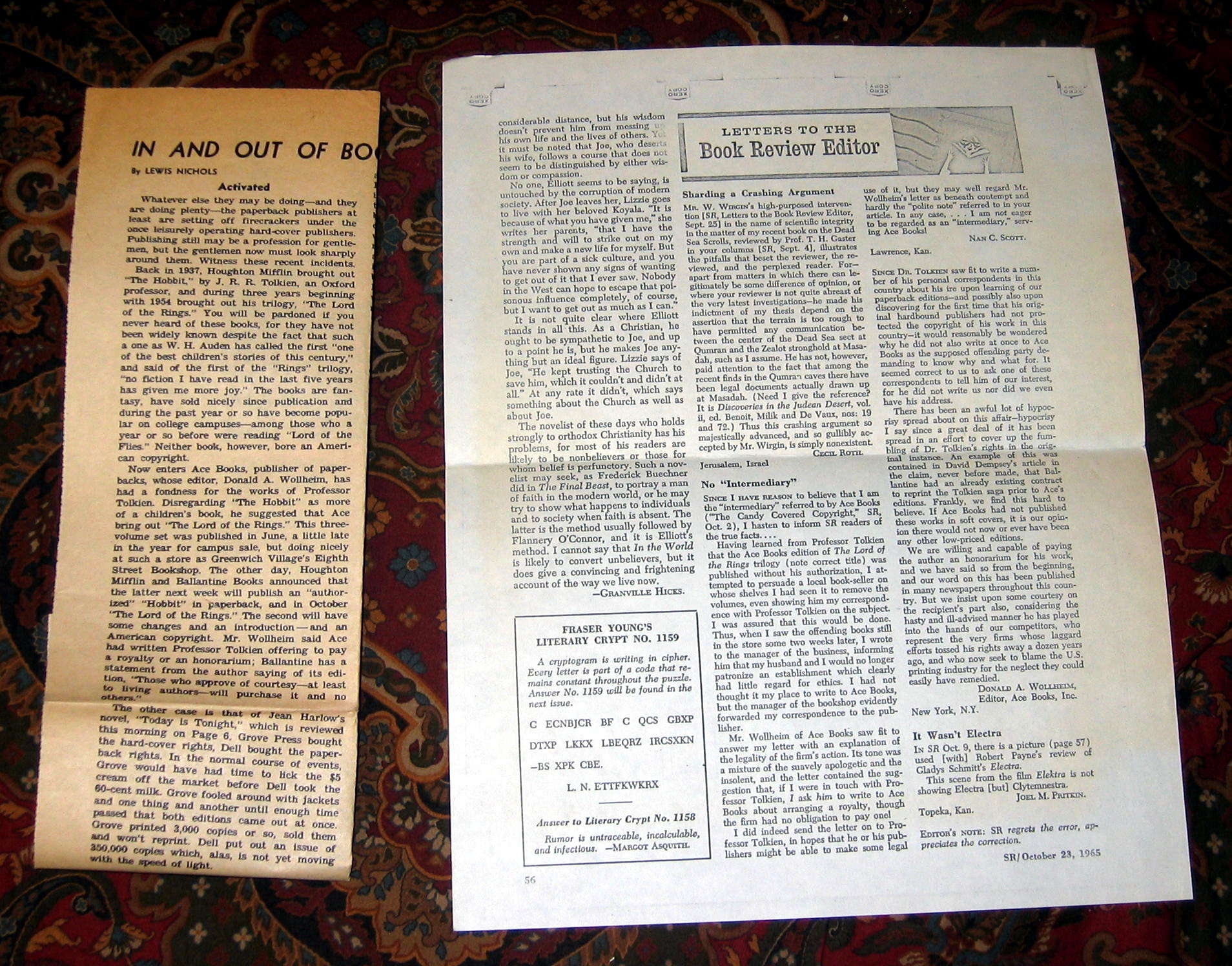 Sep 26, 2018
2018/9/26 23:27:25 (GMT) Greenwich Mean Time, London, Dublin, Lisbon, Casablanca, Monrovia
A quick but important update. Thanks to Hildifons Took for sending this information along to me - Niekas #16 (an issue I hadn't seen before now) contains a three page article by Jack Gaughan titled "Tolkien Covers" where he explains in detail the process of making cover art for Ace, and the sequence in particular for how he came to produce the art for The Lord of the Rings.

It is a fascinating tale! He borrowed a copy of The Hobbit and The Fellowship of the Rings and did sketches over a single weekend. The friend he borrowed from dropped by that weekend, saw he was painting a cover, and discovered that the Ace edition was in the works. Then -

So while I'm trying to keep all this business secret Mr. Judson called (from TIME's offices LONG DISTANCE!!! He called TOLKIEN! Now, whether or not he mentioned what I was doing and what Ace was doing I do not know. He told me later that he called to see if there was indeed going to be a sequel to the trilogy. Of all the blankety blank people to discover this particular secret it had to be one capable of getting through to Professor Tolkien on the bloody telephone!"

There's much more to the essay, and it includes two more untitled Gaughan sketches based on The Lord of the Rings.
Share