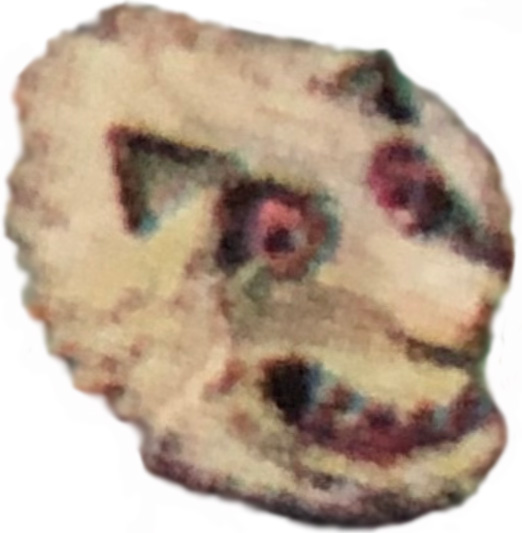 The first US mass-market paperback of J.R.R. Tolkien's The Hobbit, released in 1965, has always raised eyebrows for its depictions of lions, emus and the most bizarre Christmas tree ever painted. What were they thinking? Who were "they"? Why did that happy, smiling lion get erased after just five months of fame?

In 1965 JRR Tolkien and his publishers knew that Ace Books were planning to release cheap mass-market paperbacks of The Lord of the Rings due to the uncertain copyright status of the work in the United States. They quickly worked out a deal with Ballantine Books to release authorized editions of The Hobbit and The Lord of the Rings in the United States, with The Hobbit being fast-tracked and the Ballantine edition being released even before Tolkien had time to submit any planned updates.1

Ballantine already had a solid working relationship with artist Barbara Remington, and selected her to do the covers for Tolkien's paperbacks. Remington says "I worked for Ballantine, and as a practice, always read the books before doing the artwork. I didn’t have this luxury with the Tolkien Books, something I wish I could have changed. Ballantine was in a hurry to get these books out right away. When they commissioned me to do the artwork, I didn’t have the chance to see either book, though I tried to get a copy through my friends. So I didn’t know what they were about. I tried finding people that had read them, but the books were not readily available in the states, and so I had sketchy information at best."2 Someone from Ballantine was putting tremendous pressure and editorial direction on Remington. Hammond and Scull summarize a letter that Remington wrote to Tolkien, wherein she explains that "[s]he had to produce the Hobbit cover in only three hours, and was then instructed to put an animal (the offending lion) in an empty space."3

The "someone" who was putting pressure on Remington, and insisting on the infamous lion, was likely Betty Ballantine. "While Ian Ballantine, who died in 1995, was the better known of the publishing duo, Betty Ballantine, who was British, quietly devoted herself to the editorial side. She nurtured authors, edited manuscripts and helped promote certain genres — westerns, mysteries, romance novels and, perhaps most significant, science fiction and fantasy.... 'Most people who knew the Ballantines would say that much of the editorial vision and brilliance, from variety to quality, that Bantam and Ballantine were known for were due to Betty,' Mr. Applebaum said. 'Ian was the proselytizer for their brand of books, but Betty was the identifier, the nurturer, the editor.'"4 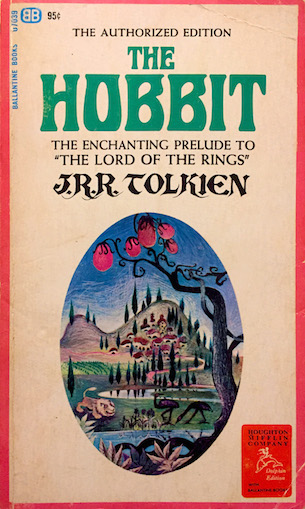 In early August of 1965, Tolkien receives a copy of Remington's cover of The Hobbit from Austin Onley at Houghton Mifflin, who is managing the relationship with Ballantine Books. Tolkien's letter back to Olney in response is not documented, but Tolkien summarizes what he said when he writes Rayner Unwin "I therefore will not enter into a debate about taste - (meaning though I did not say so: horrible colours and foul lettering) - but I must ask this about the vignette: what has it got to do with the story? Where is this place? Why a lion and emus? And what is the thing in the foreground with pink bulbs? I do not understand how anybody who has read the tale (I hope you are one) could think such a picture would please the author."5 Olney responds by writing to Unwin that he has received Tolkien's letter about Remington's Hobbit artwork, and that "[u]nlike Tolkien, everyone in the Houghton Mifflin office approves of it."6 The book is published on the 16th of August.

Less than a month later, Betty Ballantine phones up Tolkien to discuss her editorial decisions about The Hobbit cover. Tolkien says of this phone call "I should judge that all she wanted was that I should recant, be a good boy and react favourably". When Tolkien still does not agree, "her voice rose by several tones and she cried: 'But the man [sic] hadn't TIME to read the book!'... With regard to the pink bulbs she said as if to one of complete obtusity: 'they are meant to suggest a Christmas tree.'"7 Tolkien went on to write a letter to Dick Plotz and the Tolkien Society of America, saying "Can any member of the T.S.A. tell me what a lion and emus are doing in the vignette, or what is the thing with pink bulbs in the foreground? The publishers won't say and merely sob because I don't approve."7a

While there is no evidence (that I am aware of) detailing why Betty Ballantine directed Remington to use the lion, emu and "Christmas tree", it seems plausible that perhaps Betty was thinking (consciously or not) about C.S. Lewis's The Lion, The Witch and the Wardrobe, with the obvious connections to animals (lions of course in particular) and the endless winter and eventual appearance of Father Christmas as a key plot point. LWW had been first released in America in 1950 as a hardcover, and the first paperback edition was released in 1961, and the book has remained in print continuously8 so it would definitely be considered a good example of commercial success for Ballantine to emulate, and perhaps try to lure a few readers with.

The happy lion didn't last longer than a few months. The first impression of the Ballantine paperback was released in August of 1965, and sold quite well with four subsequent impressions printed through December of the same year. By the end of 1965 Tolkien had managed to pull together his emendations to the text for a new edition, and in February of 1966 the new edition was printed with the new text and with the lion removed from the cover. Remington recalls this process - "When Tolkien saw the Fruit Tree, he asked, 'What are pumpkins doing in a tree?' Of course they weren't pumpkins, but he wasn't sure what they were. I laughed, but understood he'd wanted the picture to reflect what was in his books. He was especially perplexed about the lion on the cover, because there are no lions in the story. He requested that Ballantine remove the lions from the cover, so they painted them over for later books."9

2Connecting with History - An Interview with Barbara Remington (2006) ↩

8Title: The Lion, the Witch and the Wardrobe at isfdb.org ↩

9Connecting with History - An Interview with Barbara Remington (2006) ↩
Share

...that may have sounded like I was building up to a nasty comment, but no. I like the various Tolkien images she's done. On their own, they're quite good. And, I know the reason for this, but if she'd had a chance to read the books, I'm sure there would be less.....surprise elements in her Tolkien art (ie, the lion)
Share

Before I begin, I do not wish to insult the artist unintentionally, nor anyone who has these, as I'm sure there's many of you here who have fond memories of it.

...that may have sounded like I was building up to a nasty comment, but no. I like the various Tolkien images she's done. On their own, they're quite good. And, I know the reason for this, but if she'd had a chance to read the books, I'm sure there would be less.....surprise elements in her Tolkien art (ie, the lion)

If you haven’t yet, I do suggest reading the entire interview she gave in 2006. She felt the same way!

Jul 26, 2020
2020/7/26 5:58:41 (GMT) Greenwich Mean Time, London, Dublin, Lisbon, Casablanca, Monrovia
Like many of my most favourite school teachers, Tolkien is at his hilarious best when he’s bubbling below the surface.

This was my Sunday morning read and I loved it!

As for the emus and the interesting Christmas tree, I have nothing. 🙂
Share

Oct 1, 2020
2020/10/1 15:27:23 (GMT) Greenwich Mean Time, London, Dublin, Lisbon, Casablanca, Monrovia
With thanks to a friend on Facebook, I have added another quote from Tolkien about the lion to the article above, which you can jump to with this link.
Share