Nov 27, 2022
2022/11/27 16:55:34 (GMT) Greenwich Mean Time, London, Dublin, Lisbon, Casablanca, Monrovia
Arguably the best set of Tolkien related stamps produced are those issued by the UK Royal Mail celebrating the 50th Anniversary of the publication of the Lord of the Rings on 26th February 2004.

This is the first of a series of articles looking at the collectable items available for these stamps. This first article is a basic introduction, I will be looking in more detail, specifically at the First Day Covers available, which is quite involved, in the follow up articles.

As a Tolkien collector, these stamps are a great area to specialise in as there is a surprisingly large number of items to collect, mainly the First Day Covers, and lots of them can be obtained relatively cheaply in the UK, and, being small and flat, postage is affordable. Although hunting down all the items is challenging, but that is the fun of collecting.

There are 10 stamps all featuring Tolkiens own art.

The basic mint set of the 10 stamps came as a ‘tenant’ block, however they were printed in large double sheets. By breaking down this double sheet, various smaller groups of mint stamps were available, specifically collectable are a whole single sheet, gutter pairs (2 sets with middle border), edged set (giving title and colour ‘traffic lights’), the basic set and individual stamps. 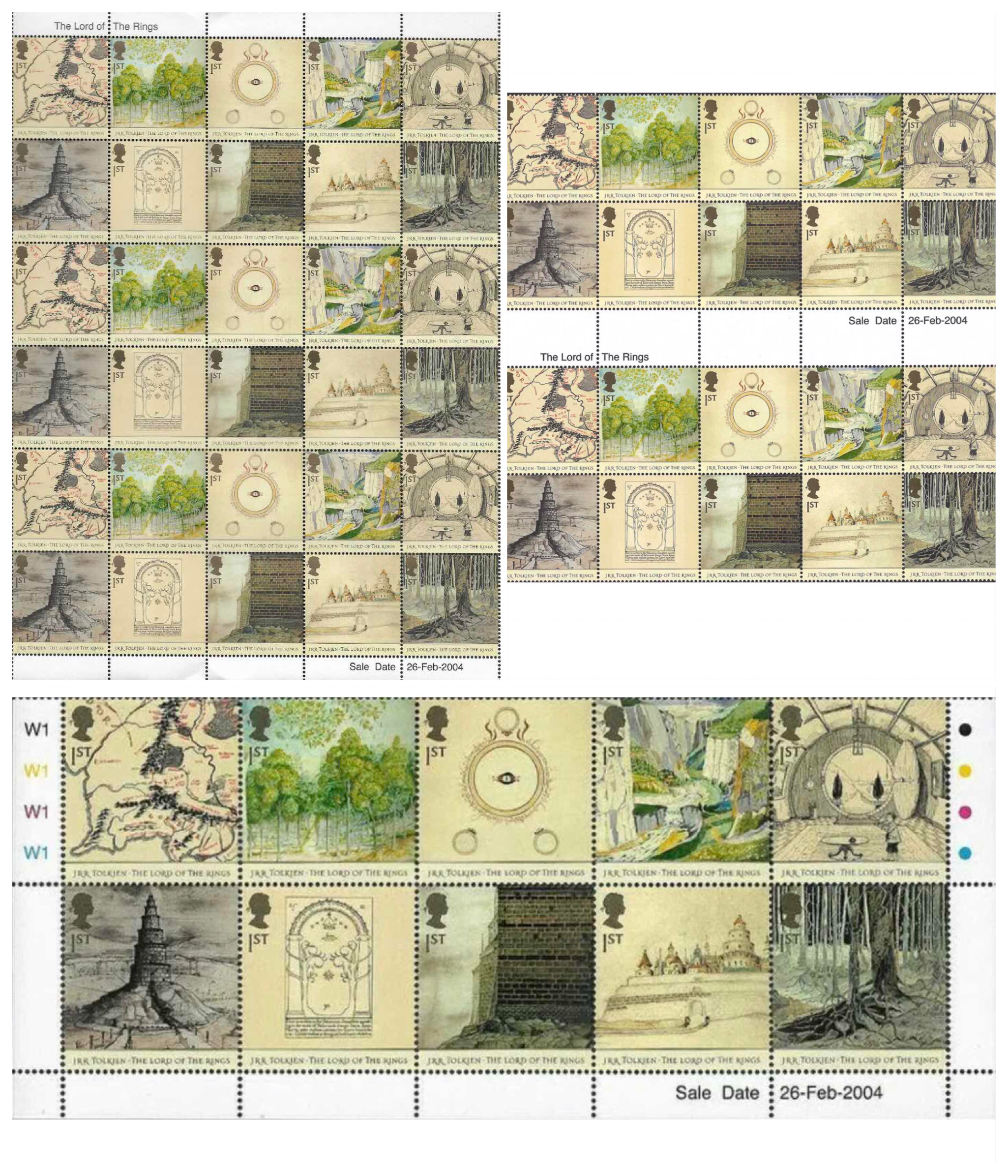 When the stamps were released, a commemorative Presentation Pack was available. This contained a mint set of the stamps in a themed folder along with a fold out pamphlet which gave details about the 50 years of Tolkien and the Lord of the Rings. 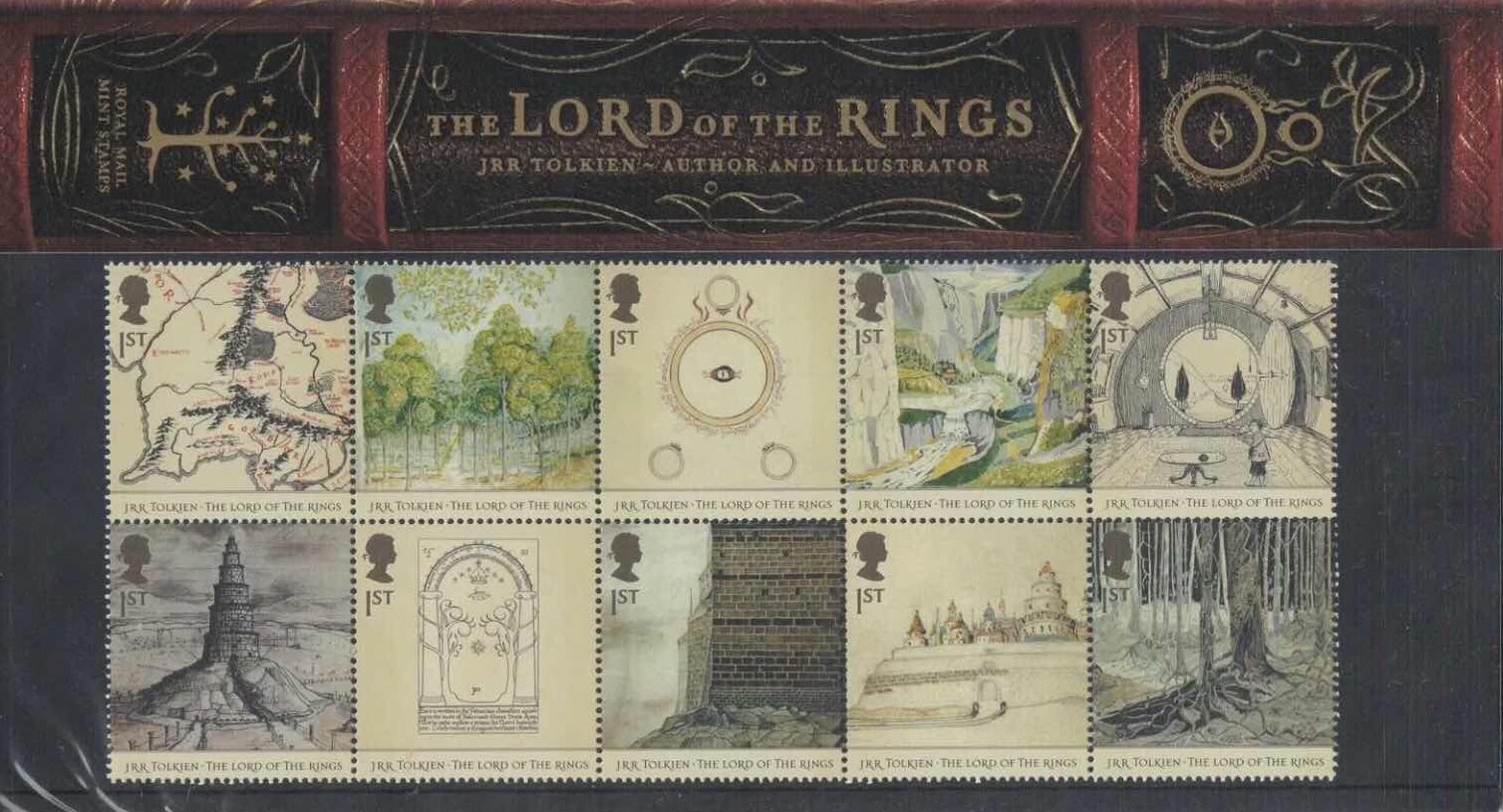 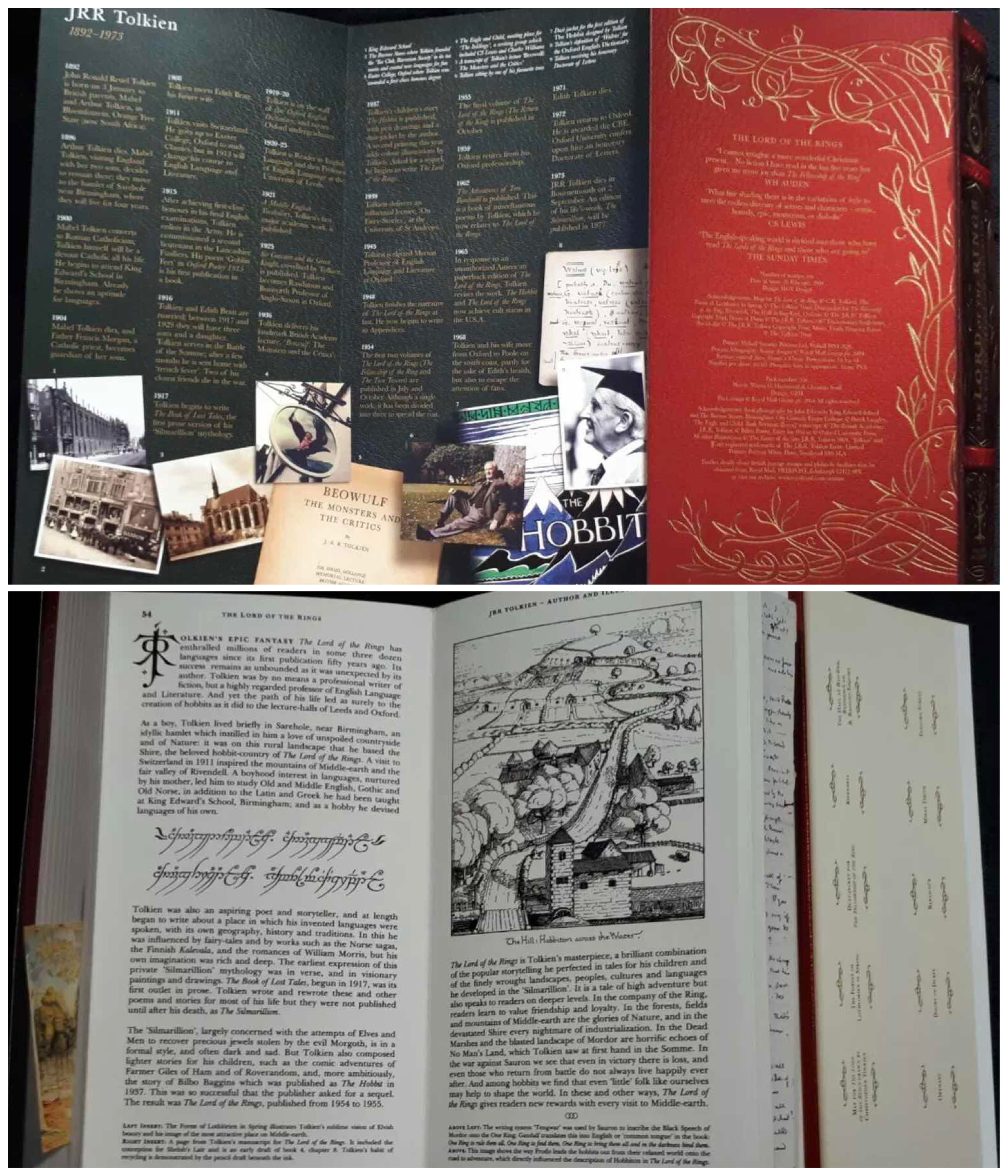 On the day of issue, 26th February 2004, First Day Covers were available. These are envelopes with the stamps on the front which have been officially cancelled by the Royal Mail with an official postmark for the issue date. Special postmarks must be authorised by the UK Royal Mail and consist of an image and a place of issue in the UK.

UK First Day covers is quite an involved area with a lot of items available, there are a variety of official postmarks and a variety of envelope designs. I will go into more detail on these in the next article.

The Royal Mails own commemorative postmark for the stamps was a JRRT monogram image from Talents House Edinburgh (the address of the Royal Mails Philatelic Bureau). 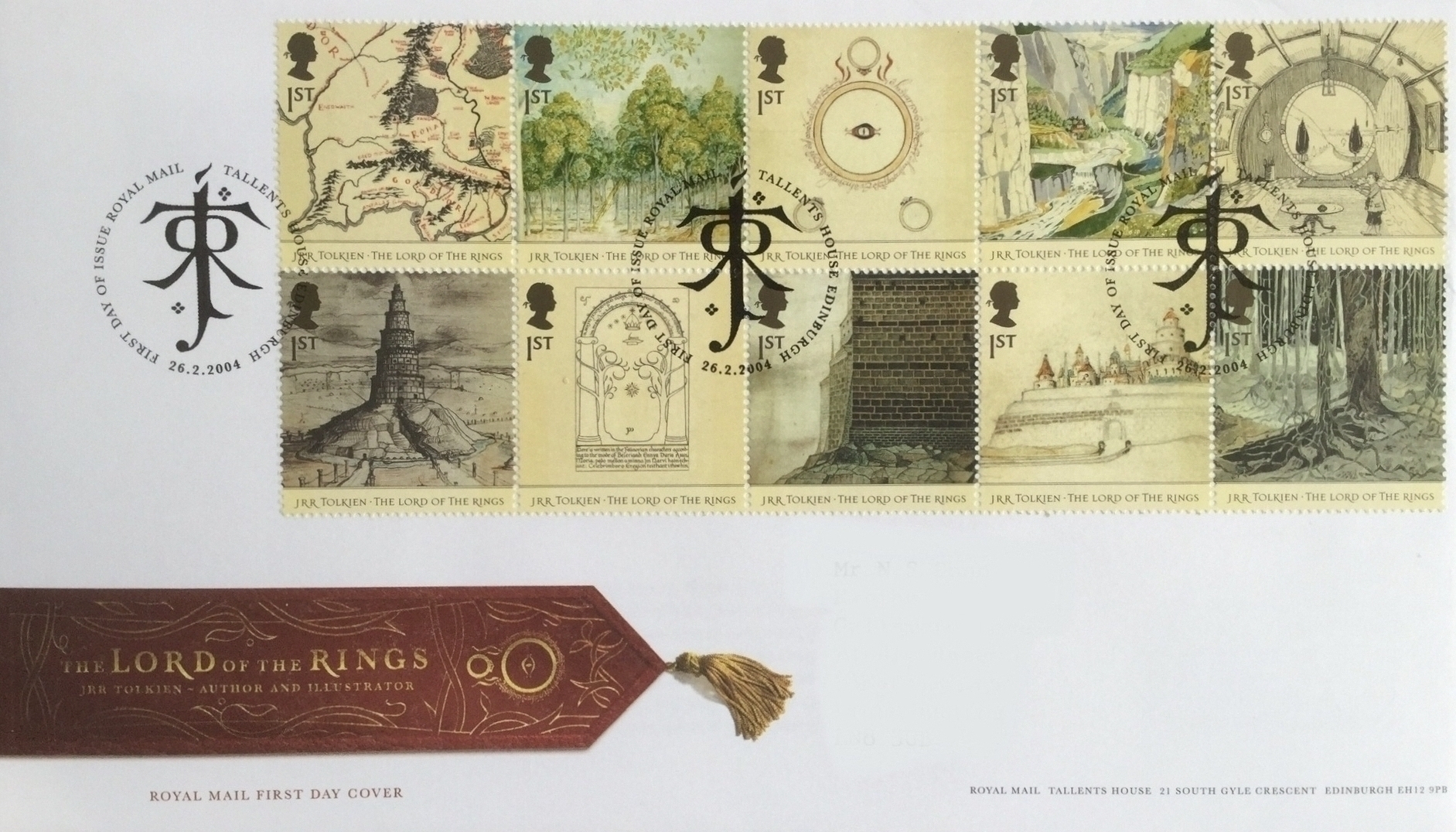 Also available, were a set of 10 commemorative postcards of the stamps. These featured a large picture of each stamp.

Note that these postcards could also be stamped and sent on the first day of issue, making the First Day Postcards. I will explore this more in a future article. 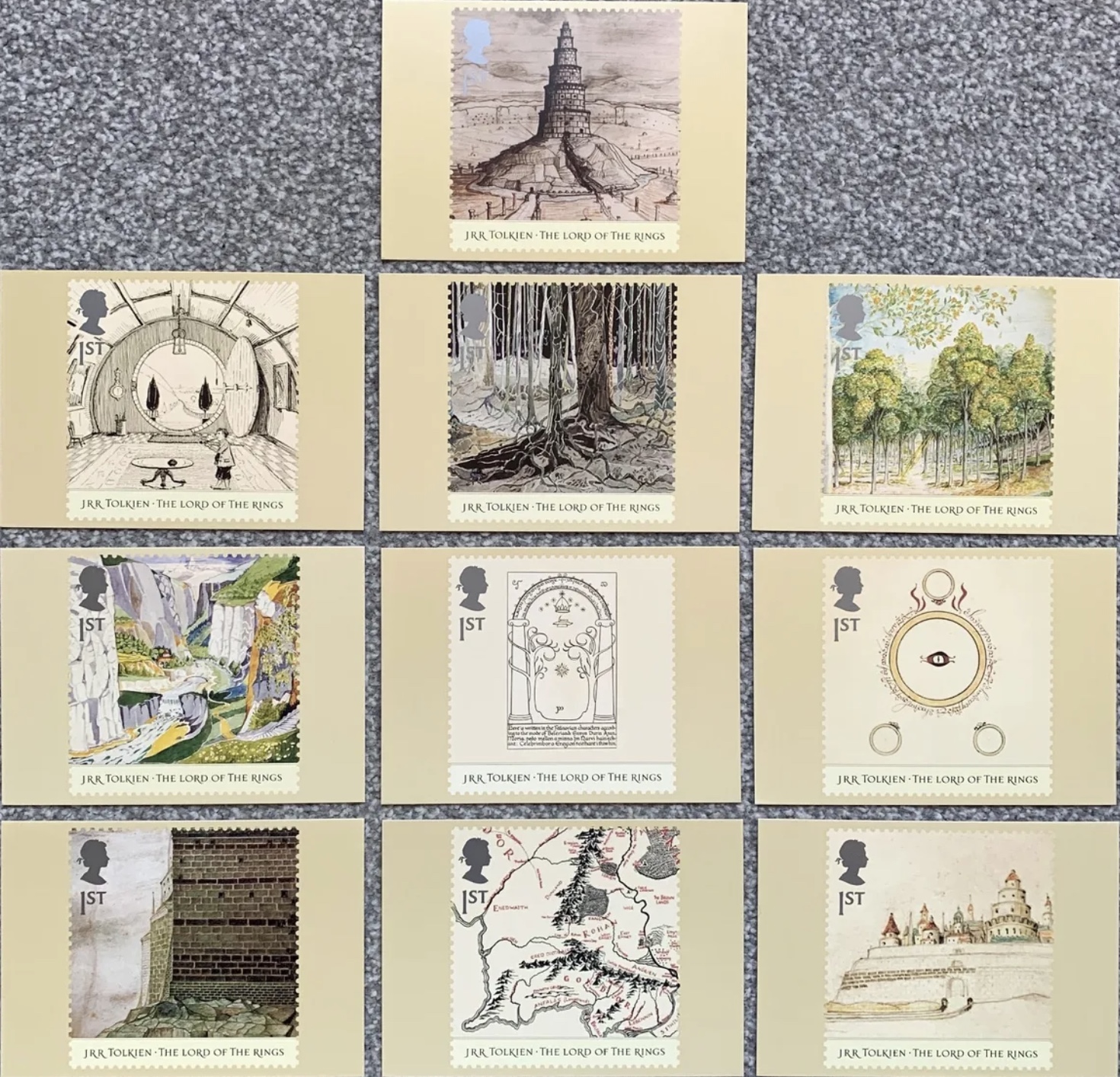 The UK Royal Mail produces a magazine which details the stamps they are about to release. The Lord of the Rings 50th Anniversary stamps were featured in the January 2004 issue (Volume 41 No 5). The stamps were not featured on the front cover, but there was a 3 page article. 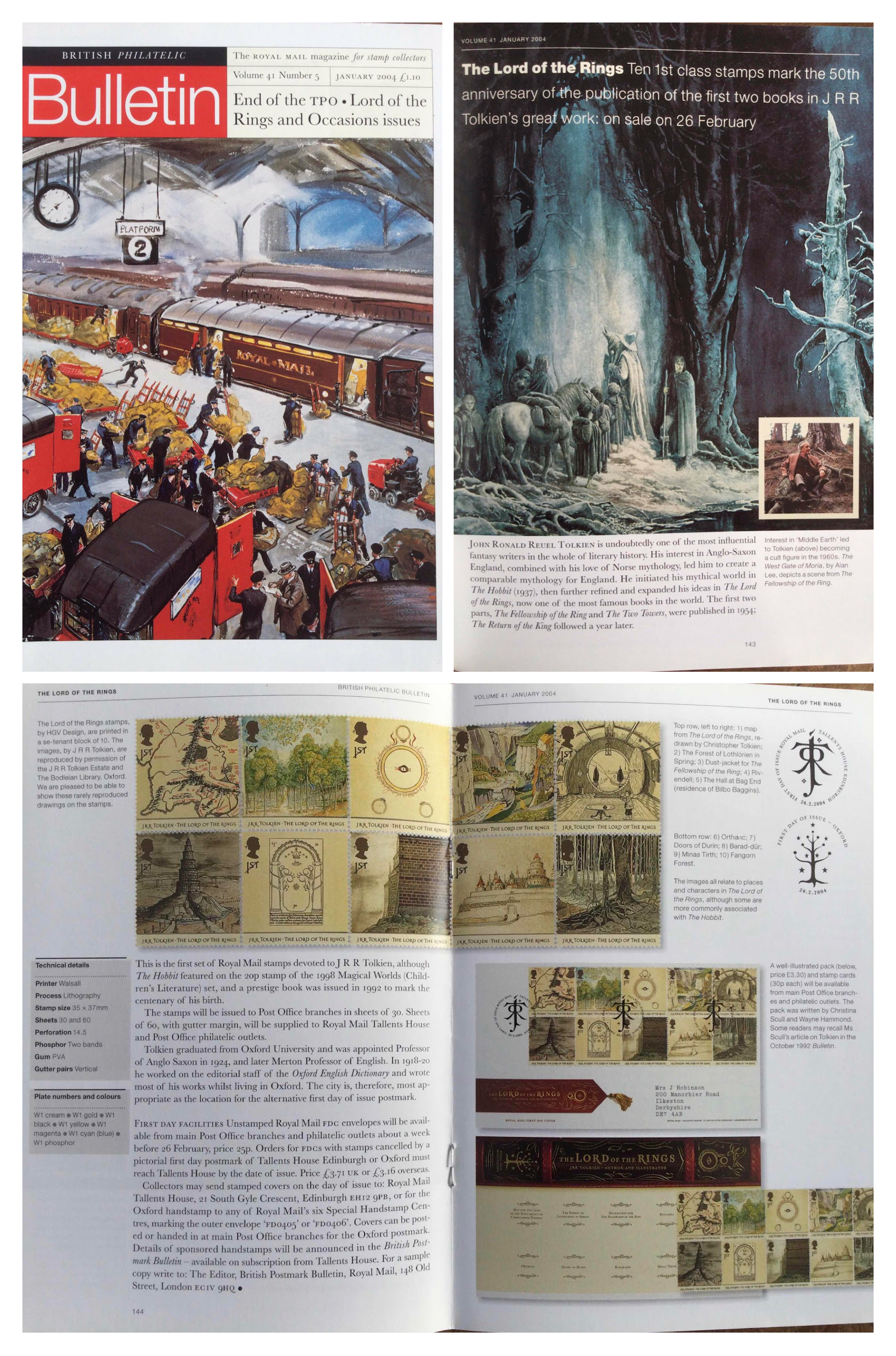 There was also a Preview pamphlet produced giving details of all the items available from the Royal Mail for the issue. 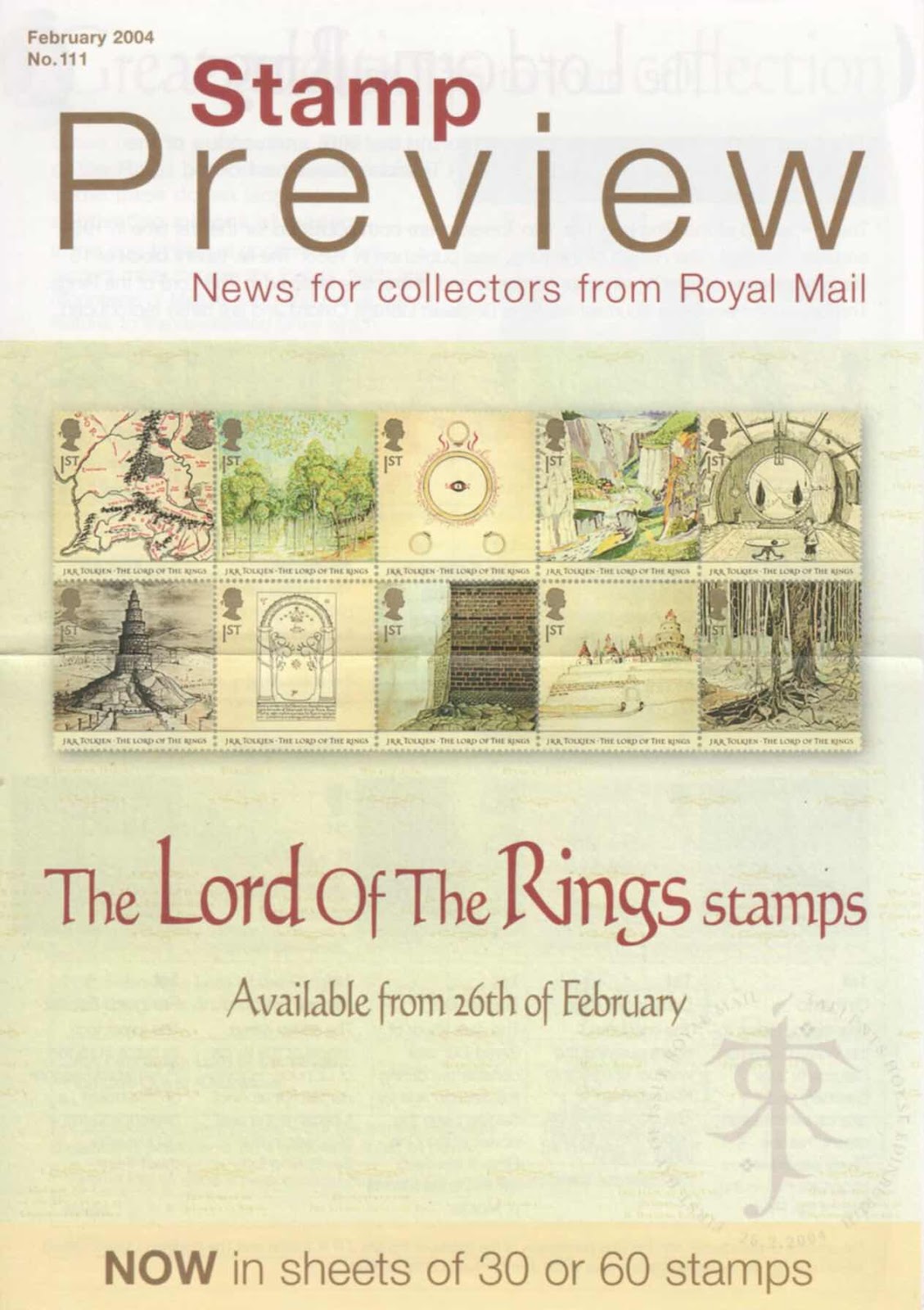 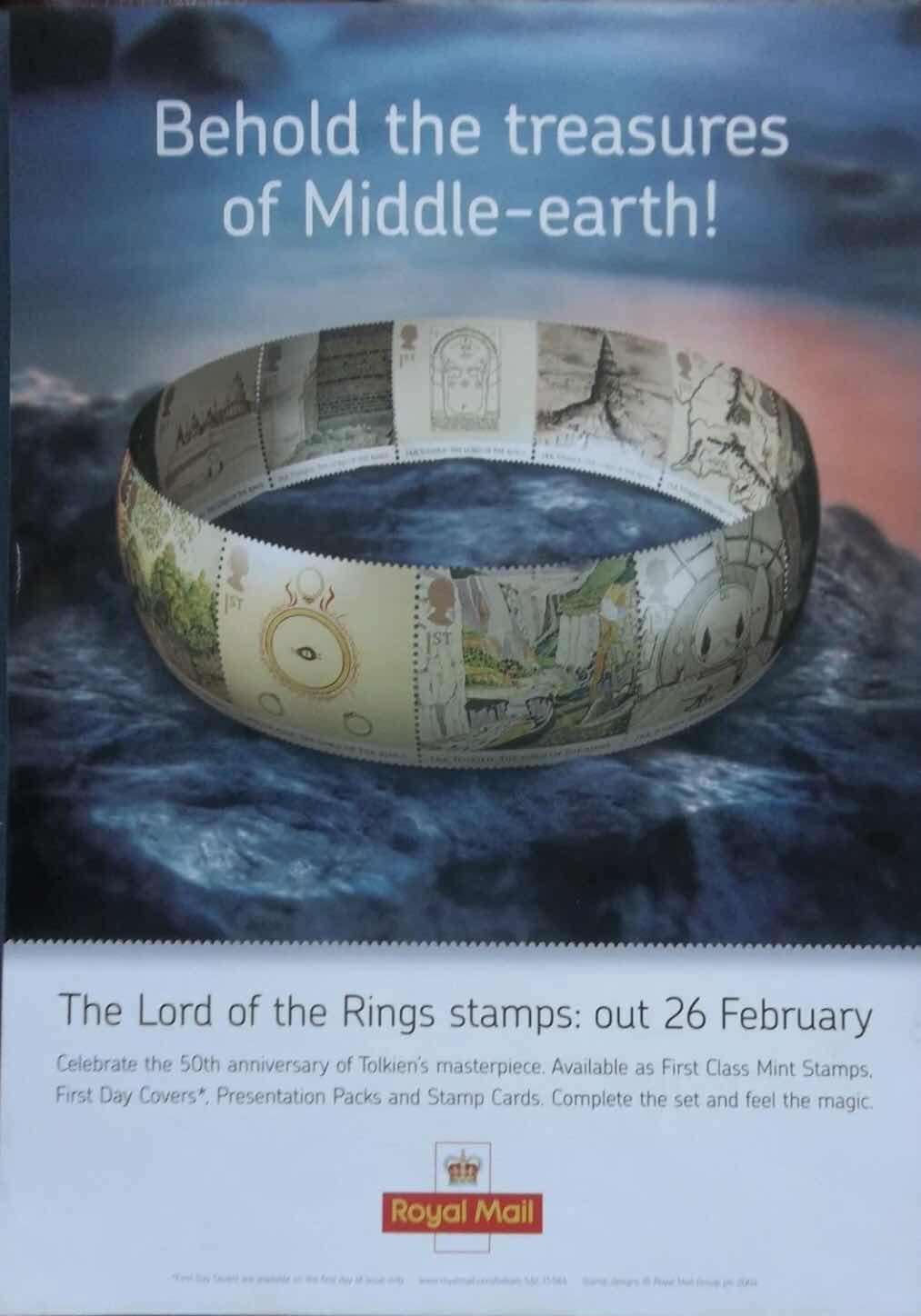 Nov 27, 2022
2022/11/27 19:04:27 (GMT) Greenwich Mean Time, London, Dublin, Lisbon, Casablanca, Monrovia
I have quite a few of these, and they are all worth getting, but if you want just one of these, then I think the Presentation Pack is my favourite item that AndyBirdUK has listed.
Share

364
onthetrail replied
Yesterday
Typo in Ballantine Fellowship of the Ring